Siglent Technologies has introduced two new radio frequency (RF) signal generators for a wide range of RF testing applications, including the NR-5G Band (FR1) between 3.4 and 3.7 GHz. Siglent’s new Model SSG5000X series RF signal generator can source analog and vector signals up to 4 GHz or 6 GHz. In the same family, the new SSG5000X-V series generator features internal IQ modulation with an RF modulation bandwidth up to 150 MHz and an arbitrary waveform playback function.

The phase noise specification of the generators is -120 dBc (at 1 GHz/20 kHz offset), the regulated maximum output level goes up to 20 dBm (settable up to 26 dBm) and the minimum output level is -130 dBm 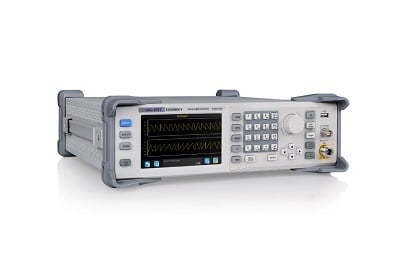 Source: Siglent Technologies(settable down to -140 dBm). The SSG5000X can also be upgraded with an optional OCXO-module that improves the temperature stability of the source, which is especially important for precision tests and manufacturing applications.

The SSG5000X comes standard with a 5 in touch display. The front panel and display menu structure is easy accessible and well designed, so that it takes only minutes to learn. Like most newly introduced Siglent test instruments, the SSG5000X incorporates a web server for easy remote control over Ethernet. This unit offers all analog modulation types including pulse-modulation as a standard feature. Different types of frequency or amplitude sweeps can be set and combined. The signal valid and trigger in/out BNC-connectors on the back side enable a smooth and easy implementation into automated test systems. All units support the connection of an external USB-power meter in order to compensate the path loss between the RF out of the generator and the device under test.

The new model SSG5000X-V vector signal generator is designed for more advanced applications like receiver testing, where complex modulated signals are required. There are multiple possibilities to setup and generate IQ-modulated signals. The custom mode allows a fast setup of standard modulation schemes like ASK, FSK, PSK and QAM with a symbol rate up to 120 Msps. This kind of signal is often used for in-band blocking (modulated interferer). In complex test cases that require multi-carrier, OFDM modulated signals, like those used in digital broadcast, wireless or cellular telecommunication systems, the powerful ARB mode delivers the necessary flexibility and ease-of-use to quickly create the desired waveform.

The SSG5000X-V includes a selection of common protocol files, such as 5G NR, LTE, WLAN, WCDMA, GSM, and Bluetooth built-in. If these are not what is needed customized ARB files can be created, uploaded and replayed. Additive white Gaussian noise (AWGN) can be generated within the instrument and directly added to the wanted signal, which is a powerful feature for receiver testing. The SSG5000X-V is also able to output differential I and Q baseband signals. There are four BNC connectors on the back, plus I and Q baseband inputs to support external IQ-modulation. The multi-tone mode makes it easy to generate two- or more-tone signals simply by selecting the number of tones and setting the spacing. Multi-tone signals are widely used for audio measurements, amplifier and receiver non-linear distortion tests, ground and satellite communications tests.

The 4 GHz versions SSG5040X(-V) can later be upgraded to 6 GHz by software license key. The price for these new RF signal generators starts at $8,809.