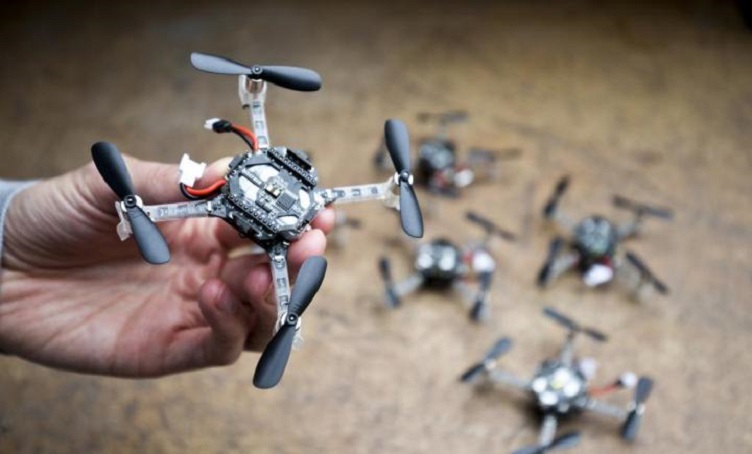 Tiny drones could be used to explore disaster areas in a swarm quicker than larger drones. Source: TU Delft

Researchers at TU Delft, University of Liverpool and Radboud University of Nijmegen developed a new system of small robots inspired by insects. The goal is to develop small and cheap robots that can perform tasks that are currently out of reach of large, individual robots, such as exploring a disaster site or other search-and-rescue scenarios much quicker than just one drone.

Research has been going on for years to develop tiny drones that act as swam intelligence. The challenge has been to get these drones to navigate autonomously while having limited sensors and computing power because they are so light.

In the future, rescue workers would release a swam of tiny drones to explore a building that is about to collapse, map troubling areas or locate people who need to be rescue.

Researchers tested the swarm drones in an indoor environment where the tiny drones were equipped with cameras and sent in to find dummies that represented victims in a disaster scenario. In six minutes, a swarm of six drones were able to explore about 80% of the open rooms — something researchers said would be hard to do in that time with a single drone. One drone found a victim but its camera malfunctioned so another drone came in to get a photo.

"The biggest challenge in achieving swarm exploration lies at the level of the individual intelligence of the drones,” said Kimberly McGuire, a PhD student at TU Delft. "In the beginning of the project, we focused on achieving basic flight capabilities such as controlling the velocity and avoiding obstacles. After that, we designed a method for the small drones to detect and avoid each other.”

Researchers put a wireless communication chip in each drone in order to create signal strength between these chips. The advantage of this is that it doesn’t require extra hardware on the drone and requires few computations.

The largest challenge will be to see how small robots navigate an unknown environment autonomously. Insects don’t have detailed maps but make landmarks of relevant places like food sources and their nest. The robots would be given similar freedom with knowledge of where the robot's base station is and following other wireless beacons to pre-determined destinations.