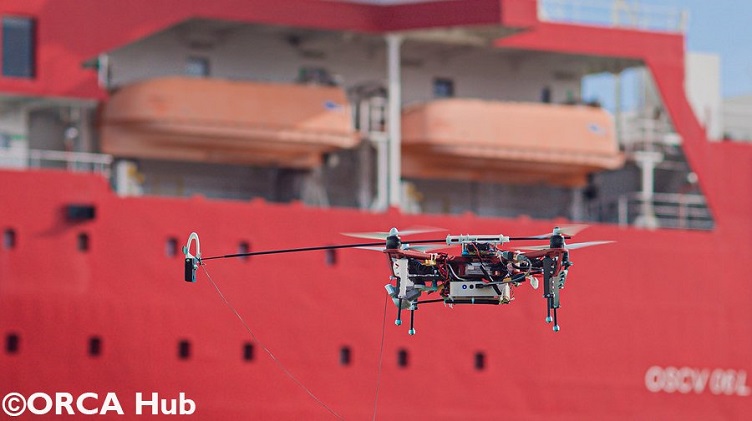 An autonomous drone is tested on an oil rig. Source: Orca Hub

A U.K. research hub has unveiled 16 autonomous or semi-autonomous robotic solutions to boost safety in the inspection of dangerous or hard to reach energy structures.

Orca Hub is a research consortium of five universities — including Heriot-Watt University and the University of Edinburgh — that works with 35 industrial partners on developing robotics and artificial intelligence technologies for the world’s energy industry. The goal of the Orca Hub is to reduce or even remove how much humans have to interact with hard to reach or dangerous work environments such as wind turbines, oil rigs or undersea surveying.

The 16 technologies include autonomous drones and other sensing devices that would be used in or around offshore assets for monitoring and inspection.

“Drones are currently used to visually inspect offshore wind turbines, but these inspections are remotely controlled by people on-site at the offshore location,” said Mirko Kovac, director of the aerial robotics laboratory at Imperial College London. “Should an area of concern be found, technicians are required to carry out further inspection, maintenance or repair, often at great heights and therefore in high-risk environments.”

The Orca Hub drones are fully autonomous with the ability to visually inspect a turbine for integrity, make contact and place sensors on infrastructure or even act as the sensor in order to gauge the health of an asset. In some circumstances, a drone could drop off material needed for repairs for certain types of damage, the center said.

“This has far reaching applications including removing the need for humans to abseil down the side of turbines which can be both dangerous and expensive,” Kovac said. “Our drones could also reduce the number of vessels travelling to and from wind farms, providing the industry with both cost and environmental benefits.”

Limpet is a multi-sensing device for deployment in large offshore energy programs. It is equipped with nine sensors and four methods of communication integrated into a single platform. Limpet replaces the need for multiple sensors to be used for integrity monitoring on wind turbines. The device can wirelessly communicate with other devices as well as humans and works subsea or topside as an early warning system for inspection or maintenance.