Another social robot bites the dust; is there a viable market?

Kuri was scuttled back in the summer of 2018. Source: Mayfield Robotics

It is not a good time to be a social robot.

If it wasn’t bad enough that they need to beg for your attention or are forced to play Journey’s “Don’t Stop Believin’” on loop, now they have to fear for their lives. And not just from getting hit by an electric car at a tradeshow.

While companies continue to invest and develop robots for the home that use machine learning, artificial intelligence and facial recognition to learn their human’s behavior patterns and emotional state, consumers continue to reject the idea of having these sometimes cute, sometimes creepy, robot helpers in their daily lives.

Last year, Mayfield Robotics ceased production on Kuri, a social robot that could not just interact with families but monitor the house while homeowners were away or sleeping.

Now, another social robot has been put out to pasture. Jibo was an anthropomorphic dancing assistant billed as a way to make home life easier. Yet, the makers of Jibo apparently had issues with sales and meeting expectations and late last year sold off its assets and intellectual property after already laying off a majority of its staff. Now, the servers that run the social robot have been closed, effectively ending Jibo's brief robot life as a helper.

The challenge for social robot makers is creating long-term interest in the machines while at the same time not setting expectations for these robots so high that there’s no way to deliver what is promised. Robots that are used in the industrial market or in the commercial space don’t have these issues because they are doing tasks that humans would find tedious or used in situations where consumers only have short interactions.

But a robot that lives with a consumer is an entirely different story. According to the American Psychology Association (APA), social robots are most effective when the humans that bring the machine into their home perceive it more like a self-directed agent with some decisions over its choices and behaviors rather than something that just tells you the weather or the latest political landscape.

While it is still being worked out to how best make social robots more like a partner than a machine, the APA said, based on its research, that robots that behave in a predictable way are treated more like a machine compared to a social robot that surprised or shocked its human owners in some unpredictable way.

This is piggybacked by the expectations that humans have about social robots. While most of the robots are billed as “helpers,” they aren’t going to take out the trash, do laundry or make a gourmet meal. At least, not yet. The help these social robots provide is, at a minimum, playing music or having a chat and, at best, turning on your lights when you come home.

A paper issued last year at the ACM/IEEE International Conference on Human Robot Interaction from Honda Research on its Haru social robot experiment said that keeping human expectations low while at the same time stoking interest may prove to be a good strategy for social robot developers.

A robot that is built with a futuristic look would be bound for disappointment if it only answered questions or played music. Whereas smaller social robots in the shape of an animal or tiny machine and operate more like other connected devices in the home are likely to fare better, Honda Research said. 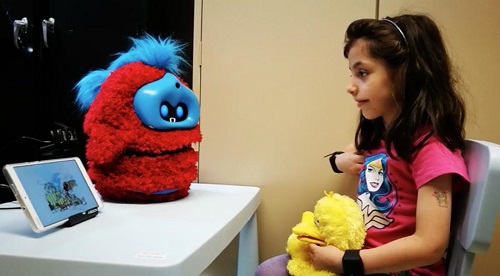 Tega is being used by preschoolers to help improve storytelling and linguistics. Source: MITWhile price definitely plays a role here and may be one of the major reasons for the failure of Jibo and Kuri — the former was priced at $900 and the latter at $800 — the inability of these social robots to do nothing more than perform functions that an Amazon Alexa-powered Echo or Dot can do probably didn’t help either.

However, where these traits may come in handy is in the teaching of children. MIT’s Personal Robots project has been experimenting with using social robots to improve children’s storytelling and improve linguistics. Using a social robot called Tega, MIT used the machine in 12 preschool classrooms in the greater Boston area for three months. Over the course of the experiment, Tega not only personalized each child's experience, but those children who interacted and built relationships with the robot showed higher engagement, learned and retained more vocabulary words and used more complex syntax structure in their speech compared to where they started.

MIT said its project showed that social robots hold great promise for augmenting the efforts of parents and teachers to promote learning and help at-risk communities get a jump start on pre-literacy through personalized instruction that can adapt to many intersecting domains of skills and abilities.

MIT’s conclusions on social robots are backed up by Yale University’s Social Robotics Lab research involving robot tutors that indicates the physical presence of a robot can increase cognitive learning gains and enjoyment. Yale is conducting its own social robot experiments with fifth graders using a robot called NAO that helps with fraction problems. The robot provides help to each student upon request and the university is exploring intervention strategies that can be employed to shape productive help-seeking behaviors in children who are having trouble.

Despite the advantages of using social robots in education environments, challenges remain. Justifying the cost versus other learning tools such as laptops that don’t require maintenance or installation, insufficient speech recognition in younger users and finding the right balance of social interaction with meeting the task at hand continue to be a problem. While social robots stand to become part of the educational infrastructure, in order to get the most out of them, these challenges need to be addressed. 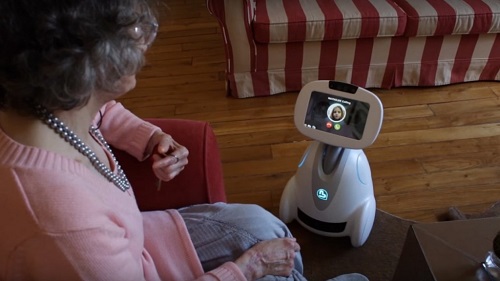 Buddy offers seniors a companion but also helps remind them to take medicine at the right time. Source: Bluefrog RoboticsThe market for social robots is expected to grow to nearly $700 million by 2023, up from about $288 million in 2017, according to Research and Markets.

That means for all the failures that are happening in the home for these social robots, companies will continue to develop and sell them as long as the market is growing. Research and Markets said much of this growth will happen in the healthcare industry where a growing elderly population is increasing demand for social robots.

Social robots are being used to help the elderly suffering from afflictions experience better quality of life. A recent study done by the Research Centre for Clinical & Community Practice Innovation in Australia found that older adults with dementia who spent time with a social robot that provided comfort and companionship had higher quality of life than those who didn’t.

But social robots are also finding viability in the homes of seniors who are choosing to spend as much time as possible in their own home, even if they are alone. Many of these consumers require day-to-day assistance or regular healthcare but don’t want to be burdened with having to do it in a place they are uncomfortable with or where they fear they will get subpar treatment.

Blue Frog Robotics has developed Buddy, a companion robot that provides social interaction and assistance by reminding seniors of appointment times, deliveries and upcoming events. The robot can also monitor the house for those that live alone, detect falls and provide medication reminders. The robot can also connect with loved ones through Skype and Facetime.

Another companion social robot under development is Rudy from INF Robotics. Rudy uses AI, mobile cloud robotics, cognitive computing and machine learning to adapt to the needs of elderly users as they change over time. Rudy is designed to promote an independent lifestyle while allowing users to get in touch with caregivers and family as needed.

While it is unclear if these healthcare or educational robots will learn from the mistakes made by Kuri and Jibo, the clear difference is that these robots are in demand and offer something that kids and the elderly can’t get elsewhere in their lives. And while we don’t know the exact reasons for Kuri and Jibo folding, the high price and the inability to live up to expectations no doubt contributed to their demise. Now the question is will the host of other social robots introduced at this year’s CES tradeshow and others already on the market fare any better?