Robot Assistants May Creep People Out

Robots are in our lives more than ever before. They manufacture goods, they serve as butlers and companions, stream music and teach our kids.

But a new study by Penn State University suggests many of these robots may be doing something they are not programmed for—creeping everyone out. 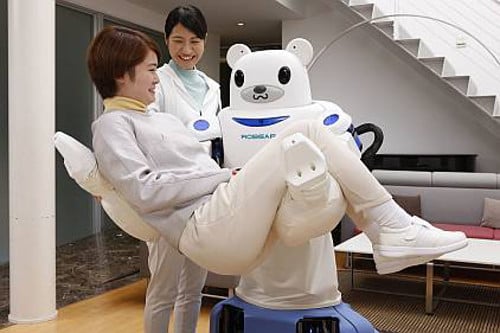 Robot assistants such as Riken’s Robear may be able to help people, but it may also creep them out. Source: Riken The study took place at a retirement home where senior citizens use robot assistants to help them with everyday tasks such as dispensing medications or serving as emotional support companions. Researchers found that the more cheery robots tended to creep people out while serious robots were better at easing anxiety depending on how users perceive a robot's role in their lives.

Senior citizens were more likely to accept robots labeled as companions if the machine had a more serious demeanor rather than robots that were more whimsical.

“We were actually surprised to find out that they wanted companion robots to be serious and assistant robots to be playful,” says Shyam Sundar, professor of communications of the Media Effects Research Laboratory at Penn State. “But it's pretty clear from our data that a serious demeanor adds credibility to a companion robot, whereas a playful demeanor softens the tension when interacting with an assistant robot.”

The goal of the study is to learn how people react to a robot’s demeanor, which in turn will help designers make robots that people are more likely to accept and use. “The variations of role and demeanor are shown to indirectly affect robot use intentions, and are therefore important to understand, as more initiatives target senior citizens as a prime user population for social robotics,” Sundar says.

Assistant robots and companions are likely to have an increased role in hospitals and retirement homes as health-care firms look for alternate ways to help physical, mental and emotional challenges for the elderly, researchers say.

“In the future, we might see robots working in the health-care system to provide senior citizens with physical assistance and emotional support in the comfort of their own homes,” Sundar says. “Therefore, it's becoming more important to understand how we can promote healthy communications between senior citizens and robots.”