Tadiran bobbin-type lithium thionyl chloride (LiSOCl2) batteries feature a very low self-discharge rate of just 0.7 percent per year, enabling these cells to operate for up to 40 years in extreme environments.

In order to make the best engineering decisions you have to think critically and quickly. One of the fundamental tools for doing so is to make a list of things you need to check off, because it consolidates all your critical specs in one place. From there you can prioritize them and review the most important ones first. With that in mind here’s a checklist detailing how Tadiran bobbin-type Lithium Thionyl Chloride (LiSOCL2) cells meet the battery needs of many of today’s electronic designs:

Long shelf life? Yup. Proven to provide up to 40 years of standalone service.

Wide operating temperature range? You got it. Normally from –55 °C to +85 °C with specially modified cells operating at -80 °C or below for the medical cold chain.

High cell voltage? Affirmative. LiSOCl2 batteries have an open-circuit voltage of 3.67 V and an operating voltage of 3.60 V, higher than in any other commercially available primary battery. The higher the voltage, the fewer cells are needed, which saves space and expense.

Suitability for applications involving high current pulses in combination with high energy (such as portable defibrillators, emergency call systems and the like)? Yes, that, too.

Even a quick perusal of this list should make it clear that the bobbin-type LiSOCl2 battery is a power source that is particularly well-suited to the requirements of the new generation of industrial grade uses. Here, in the first of a series of articles, we will explore Tadiran’s long-life LiSOCL2 cells along with two specially modified cells: Tadiran PulsesPlus Series batteries, which incorporate a patented hybrid layer capacitor (HLC) to deliver high pulses; and Tadiran Rapid Response (TRR) series of batteries, which can deliver high capacity, high energy density, and moderate pulses without voltage or power delay. 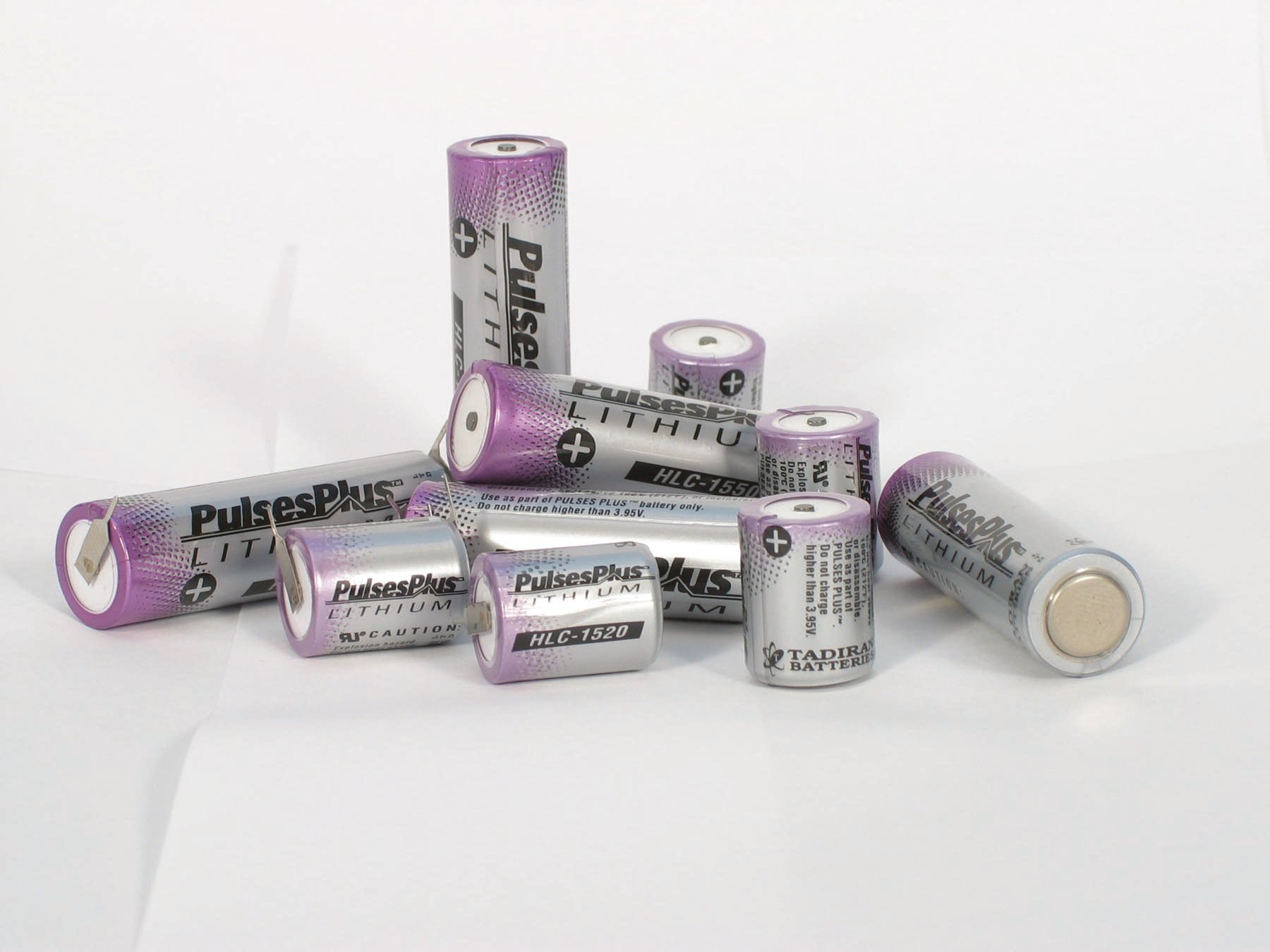 A superior quality bobbin-type lithium thionyl chloride (LiSOCl2) battery features an annual self-discharge rate of less than 1% per year, enabling the cell to last up to 40 years, even in extreme environments. (Source Tadiran)

Industrial grade LiSOCL2 batteries from Tadiran provide unique performance attributes that solve the most difficult technical challenges in order to play an essential role in all types of remote wireless applications where rugged reliability is paramount, such as:

· Asset tracking applications, such as shipping containers where you want to know what's in the containers and have continuous data showing that a temperature-controlled environment has been maintained

· Remote wireless devices that are subject to extreme environmental conditions, such as a device that monitors the location and size of icebergs floating in the Arctic Ocean)

Exceptionally long service life, even in the harshest of environments, is an inherent advantage of bobbin-type LiSOCL2 chemistry. However, it's not just the chemistry that makes a difference; other suppliers can do this kind of chemistry, but with a significantly higher annual self-discharge rate. The processes used to manufacture these cells, while being a lot less guarded than Coca Cola’s recipe, remain a closely held secret. For example, over 100 steps are required to manufacture each cell, so there is plenty of opportunity for Tadiran to differentiate its batteries by taking added steps along the way to ensure quality, from stringent requirements for raw material purity to the final assembly of the product.

Having pioneered the LiSOCl2 battery, Tadiran has a huge leg up in terms of understanding what it takes to make a better battery. Testing has shown that the self-discharge rates of competing products can be as high as 2 to 3 percent compared to Tadiran’s 0.7 percent. That's a huge difference in terms of long-term, total lifetime costs. Self-discharge of 3 percent a year might not seem a lot - but it means you'll lose 30 percent of the battery after 10 years, 100 percent of the battery after slightly over 30 years. A Tadiran battery has 0.7 percent a year self discharge - which means that after 10 years, it still has 93 percent of its capacity while the competitive product may have lost up to 30 percent of its original capacity.

Tadiran’s bobbin-type design uses a cathode that is cylindrical in shape, with the anode rolled against the inner wall of the battery case. This offers an important advantage in terms of safety. In the event of an unintentional short-circuit, the discharge current cannot exceed a limit that prevents a potential hazard, as the heat generated mainly at the contact surface between the anode and cathode can easily be dissipated to the outside. Safety is further enhanced because the battery does not require an additional rupture vent.

The Internet of Things phenomenon—both the general variety (IoT) and the Industrial Internet of things (IIoT, otherwise known as Industry 4.0) will bring a dramatic rise to applications that require high pulses to power wireless communications. In order to operate for extended periods without having to replace the battery, these wireless devices must operate mainly in a “sleep” mode to conserve energy, with daily power consumption ranging from almost zero to a few microamps, briefly alternating with an “active” mode that requires high pulses of up to several amps to energize the device for data acquisition and communication before returning to “sleep” mode.

The main limitation of standard LiSOCL2 chemistry is high passivation, which occurs because lithium is a metal that will slowly begin to rust when it comes into contact with thionyl chloride, resulting in lithium chloride. Passivation occurs because the surface film of lithium chloride serves as a protective layer that prevents the lithium metal and thionyl chloride from reacting, thus reducing the self-discharge inside the battery, which is a good thing. The downside is that if the battery remains inactive for an extended period, it will take a bit time for the passivation effect to be overcome so the battery voltage can return to the values required for data interrogation and transmission.

In addition, standard bobbin-type LTC batteries may experience a temporary drop in voltage when first subjected to a pulsed load: a phenomenon known as transient minimum voltage (TMV). There are several ways to minimize TMV. One method is to use supercapacitors in tandem with lithium batteries. But supercapacitors have significant drawbacks, including a very high annual self-discharge rate (up to 60 percent a year), a limited temperature range, and solutions involving multiple supercapacitors require balancing circuits. Supercaps present size-and-weight challenges to system designers, too. 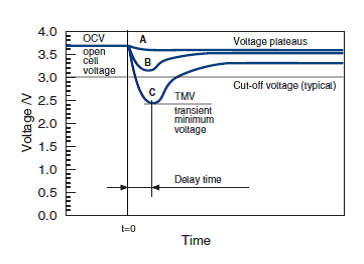 A low current: no voltage delay

PulsesPlus technology offers tremendous advantages over supercapacitors because it's much smaller and lighter and has no need for additional electronic circuitry. PulsesPlus batteries combine a long-life bobbin-type LiSOCL2 cell with a patented hybrid layer capacitor (HLC) that stores and generates high pulses. These batteries feature high voltage, high capacity, low self-discharge (less than 1 percent per year), low ESR (Equivalent Serial and Resistance), and a wide operating temperature (-40°C to 85°C). The standard LiSOCL2 battery and HLC work in parallel: the standard cell supplies long-term low-current power in the 3.6 to 3.9 V nominal range; and the single-unit HLC delivers high pulses while avoiding the balancing and current leakage problems associated with supercapacitors. 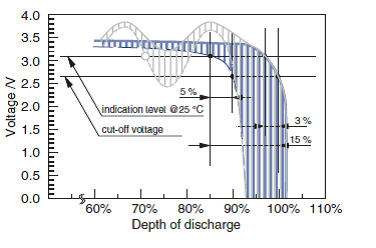 Principles of End of Life Indication:

Discharge on continuous load at +25 °C. End-of-life indication will occur approximately 3 % before cut-off (based on total operation life).

If test pulses are employed, indication can be extended to approximately 15 % of remaining operation life if the cut-off voltage refers to the continuous load level and 5 % if it refers to the pulse load level.

A seasonal temperature cycle can distort the discharge curve. End-of-life indication may occur at the grey circle for the first time leading to an early battery exchange. As a correction, indication can be suspended during temperature excursions. Alternatively, the limits or test pulse amplitude may be adjusted accordingly.

The TRR Series is designed to deliver moderate pulses without requiring the use of an HLC to minimize the TMV effect. TRR Series cells also utilize available battery capacity highly efficiently to extend the operating life of the battery up to 15 percent, especially in extremely hot or cold temperatures.

Another article in the series will feature Tadiran’s new generation of industrial grade rechargeable Lithium-ion (Li-ion) batteries, which also age gracefully by extending rechargeable battery life up to 20 years and 5,000 recharge cycles.