The European Research Council (ERC) has just published the list of 27 projects it selected out of the 299 submitted to the ERC Synergy 2018 call for projects. Among them, the CEA’s laboratories have three winners. In order to ensure Europe's long-term competitiveness, the ERC's mission is to support world-class frontier research of excellence through highly competitive calls for projects. With a budget of 250 million euros, the “Synergy” category supports two to four researchers and their teams from different laboratories to jointly carry out an ambitious research project over a six-year period. With 35 million euros in European subsidies granted to these three projects, this is a strong recognition of the expertise of the CEA and its partners within the European Research Area.

While quantum physics is omnipresent in most recent science and technology, quantum theory needs 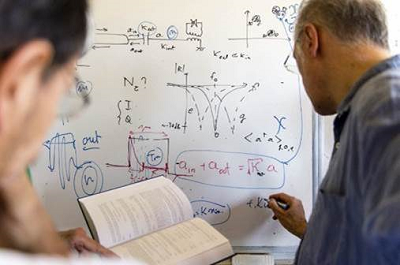 This is why the Renew Quantum project is aiming to develop a mathematical method of semi-classical approximation of quantum theories, which could benefit the entire scientific community, whether it is working on chaotic systems, quantum field theories or string theory. Building on concrete success already achieved in some quantum systems, Renew Quantum proposes using modern geometry to reinterpret quantum theories and, in particular, to reinterpret semi-classical corrections as geometric objects. The project aims for a better understanding of the entire set of corrections, which would enable more effective computing. The objective is therefore to generalize these geometric methods to create a mathematical tool applicable to almost all quantum theories.

Applied to the field of computing, quantum physics could revolutionize high performance computing, theoretically solving problems that conventional supercomputers are unable to solve. All major industries (transport, finance, energy, chemistry and pharmaceuticals) could benefit from quantum computing. In practice, this research has produced the first proofs of concept for quantum bits — the quantum equivalent of the most basic bit in elementary computing — but it is not yet certain that these first demonstrations can be reproduced on a large scale. In this context, the Qucube project aims to develop a quantum processor based on silicon, the base material already used in what is known as classical electronics. The processor will support at least one hundred quantum bits, or qubits, currently a first in terms of qubit numbers. The success of the project requires technological breakthroughs -- including architecture implementation, the control of quantum bit variability or the implementation of quantum error correction processes, and finally a thorough understanding of conventional control electronics, for example on issues related to thermal dissipation.

Whole Sun (For The Whole Sun Project: Untangling the Complex Physical Mechanisms Behind Our Eruptive Magnetic Star and its Twins)

Our Sun is an active magnetic star that, due to its variable and eruptive behavior, has a direct impact on our technological society. However, despite decades of research, many questions remain unanswered. While this

Left: simulation of the intense magnetic fields generated inside the Sun by dynamo effect. Right: simulation of internal magnetic fields emerging in the solar atmosphere. Source: CEA/University of Osloresearch into solar physics has so far focused on either the structure and dynamics of the inside of the Sun or, separately, on the surface and atmosphere of the Sun, the Whole Sun project aims to understand the Sun as a whole by consolidating research into these two major solar regions. A detailed study of the (thermo) dynamic and magnetic interaction between the deep solar interior, the surface of the Sun and the highly stratified atmosphere is absolutely vital if we hope to tackle the fundamental problems of solar physics (such as the origin of sunspots and the 11-year cycle and the presence of a warm atmosphere). In conjunction with the development of what is known as "exascale" computers, Whole Sun will deliver the most advanced multi-resolution solar code in order to jointly address global and local, macrophysical and microphysical aspects of solar dynamics. Finally, extending this integrated approach led by Whole Sun to solar analogue stars that have different rotational speeds and chemical compositions will also provide a deeper understanding of stellar magnetism and activity.