Advances in Quantum Simulators are a Step Forward for Quantum Computing

Two independent teams of scientists have developed specialized quantum computers known as quantum simulators with more than 50 interacting atomic qubits, a new record. The quantum simulator created by a team from the University of Maryland (UMD) and the National Institute of Standards and Technology (NIST) uses an array of up to 53 separate charged atoms. The ytterbium ions are constrained by gold-coated and razor-sharp electrodes. 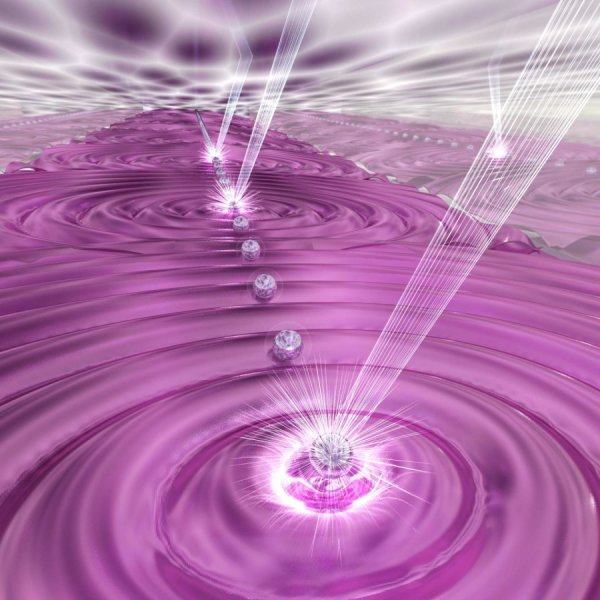 In this artist’s depiction of a quantum simulator, more than 50 atomic qubits are controlled by lasers to investigate the physics of quantum magnetism. Credit: E. Edwards/JQI

A team of Harvard and MIT researchers created a similar quantum simulator using 51 uncharged rubidium atoms trapped in place by a set of laser beams. The unprecedented number of qubits open the possibility of using these quantum simulators to explore new areas of physics that even the most powerful modern supercomputers are incapable of investigating. This includes studying topics like new phases of matter, the relationship between quantum mechanics and material properties, and even complicated real-world optimization problems.

"Each ion qubit is a stable atomic clock that can be perfectly replicated," says UMD team lead Christopher Monroe, who is also the co-founder and chief scientist at the startup IonQ Inc. "They are effectively wired together with external laser beams. This means that the same device can be reprogrammed and reconfigured, from the outside, to adapt to any type of quantum simulation or future quantum computer application that comes up."

Traditional modern computers have difficulty dealing with more than 20 interacting quantum objects. In quantum magnetism, the large number of interactions in which magnets either align themselves or end up in a disorganized tangle overwhelms classical computing techniques.

"What makes this problem hard is that each magnet interacts with all the other magnets," says UMD research scientist Zhexuan Gong, lead theorist and co-author on the study. "With the 53 interacting quantum magnets in this experiment, there are over a quadrillion possible magnet configurations, and this number doubles with each additional magnet. Simulating this large-scale problem on a conventional computer is extremely challenging, if at all possible."

At the start of the quantum simulation, an initial laser pulse sets the qubits into the same state. A second pulse of laser beams then suddenly forces the qubits to act like tiny magnets with north and south poles. At this point, the qubits can enter two different phases of quantum matter. They can either form a ferromagnet by aligning their poles with their neighbors, or they can point in random directions resulting in no magnetization. By repeatedly altering the relative strengths of the laser beams and seeing which phase dominates for various laser conditions, the scientists can observe how the qubit magnets arrange themselves in unique phases. With a large number of interactions, this process is nearly impossible to calculate with traditional computers.

This quantum simulator works well for its specialized application of investigating magnetic matter. To expand its suitability to a wider set of calculations, a quantum computer with interactions that can be programmed arbitrarily is needed.

"Quantum simulations are widely believed to be one of the first useful applications of quantum computers," says Alexey Gorshkov, NIST theoretical physicist and co-author of the study. "After perfecting these quantum simulators, we can then implement quantum circuits and eventually quantum-connect many such ion chains together to build a full-scale quantum computer with a much wider domain of applications."

The research by the UMD-NIST team and the study by the Harvard-MIT team is published in the November 30 issue of Nature.