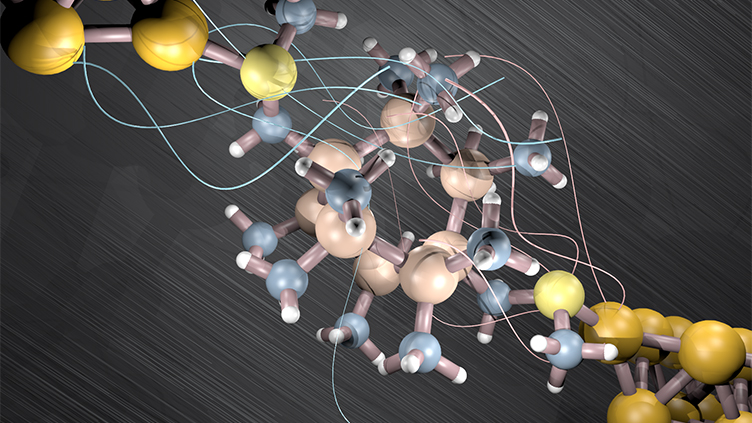 An illustration of the silicon-based single-molecule device that functions as an efficient insulator through a quantum interference effect. Source: Haixing Li/Columbia Engineering.

For the past four decades, the key to faster and more efficient computer processing has been the ability to steadily decrease the size of transistors. But now that they’re being built at the nanometer scale, researchers have questioned whether they’ve reached their limit.

One problem staying in the way of further miniaturization is leakage current: When the gap between two metal electrodes narrows to the point that electrons are no longer contained by their barriers, a conduction phenomenon known in quantum mechanics as “tunneling” occurs. As the gap continues to decrease, conduction increases at an exponentially higher rate. Science has tried to curtain this with vacuum barriers that serve as insulators, but some leakage still occurs.

An interdisciplinary team of researchers from Columbia University, Shanghai Normal University and the University of Copenhagen have found a way around this challenge by synthesizing a molecule capable of insulating at the nanometer scale.

"Our molecular strategy represents a new design principle for classic devices, with the potential to support continued miniaturization in the near term," said Columbia Engineering physicist and study co-author Latha Venkataraman.

The team designed an extremely rigid silicon-based molecule under one nanometer in length that would serve as a key component in their novel technique to block tunneling conduction at the nanoscale. The molecule exhibited signatures for destructive quantum interference — a phenomenon that occurs when the peaks and valleys of two waves are placed exactly out of phase, annulling oscillation. In theory, this interference has the potential to cancel the probability of tunneling.

The fact that the molecule is silicon-based also means that the solution has the potential to be built in the factory; it could be more readily implemented than the carbon nanotube-based approach suggested by other recent research.

Most research in the field of molecular electronics tends to look at creating highly-conducting molecules; low conductance is rarely considered a desirable property for electronics. Yet the researchers’ willingness to be pioneers by taking a closer look at insulating components may prove to be of greater value in the long run. Their work has yielded a new understanding of the fundamental underlying mechanisms of conduction and insulation in molecular-scale devices, which may help to shape the future of nanoscale electronics.

The research was published online today in the journal Nature.