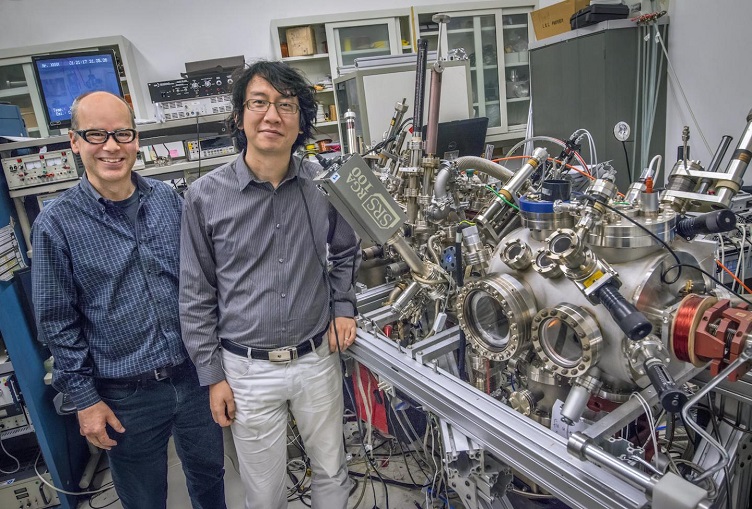 Schmid and Chen are pictured alongside an electron microscopy instrument at Berkeley Lab. The device was used for measurements in their graphene-magnetic material research. Source: Roy Kaltschmidt/Berkeley Lab.

Researchers at the Berkeley Lab’s Molecular Foundry have coupled the monolayer form of carbon known as graphene with thin layers of magnetic materials like cobalt and nickel, producing the sort of exotic behavior in electrons that could be useful for next-generation computing applications.

As published in the journal Nature Materials, the work showed how the interaction of graphene with magnetic materials affects the “spin” property of electrons. The property is analogous to a compass needle that can be tuned to face either north or south; it has been studied as a route for driving low-energy, high-speed computer memory and logic.

The researchers found that the material's electronic and magnetic properties create tiny swirling patterns where the layers meet, raising the prospect of controlling the direction of these swirls. The ultimate goal is quick and efficient storage and manipulation of data at very small scales, without the heat buildup that is a common challenge in the miniaturization of computing devices.

Past research in this area has typically used heavy and expensive materials like platinum and tantalum. The use of graphene may represent a revolutionary advance. Graphene is ultra-thin and lightweight, with very high electrical conductivity. It can also serve as a protective layer for corrosion-prone magnetic materials.

The new research represents an early step toward the goal of replacing computer hard disks with solid state devices that rely solely on electrical signals, with no moving parts. "Part of the goal is to get lower power-consumption and non-volatile data storage," explained Andreas Schmid, a staff scientist at the foundry who participated in the research.

Also involved in the research were French scientists including Albert Fert, one of the recipients of the 2007 Nobel Prize in Physics for his work in understanding a magnetic effect in multilayer materials — work that led to the field of spintronics itself.

A next step would be to work on the control of skyrmions, nanoscale magnetic features that can exhibit a property known as chirality. The property makes them swirl in either a clockwise or counterclockwise direction; if it can be universally aligned across a material and flipped in a controlled way, researchers could use it to process data.

Using skyrmions could be a major step forward for data processing, according to Gong Chen, who participated in the study as a postdoctoral researcher. It would allow information to potentially be stored at much higher densities than is possible with conventional technologies, and with much lower power usage, he said.

According to Schmid, Molecular Foundry researchers are now working to form the graphene-magnetic multilayer material on an insulator or semiconductor to bring it closer to potential applications.