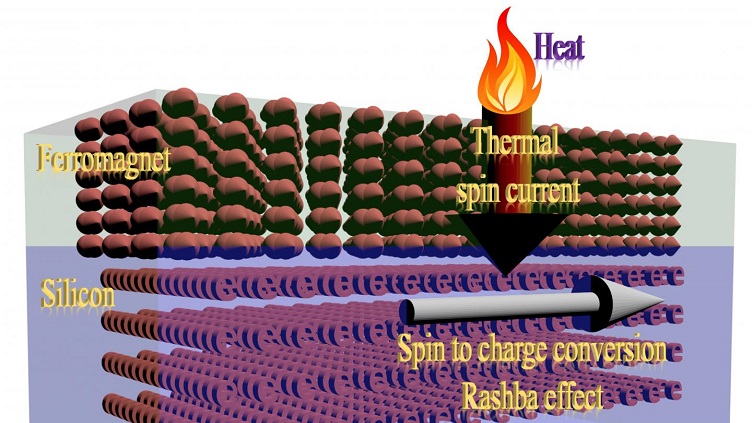 You probably know that in electronics, computer data is stored in binary ones and zeros generated by the charge of electrons. The emerging field of “spintronics” stores data the same way, except that the binary code is generated not by charge but the “up” and “down” spin orientation of electrons. These signals are infinitesimal and challenging both to generate, and to detect — but the development of methods to do so offers the promise of computers that start instantly, use minuscule amounts of electricity, require no energy to maintain data in memory and are potentially far more powerful than the computers of today.

Advances in developing the technology have recently been reported by engineers at the University of California, Riverside (UCR), who used a simple two-layer “sandwich” of silicon and Permalloy, a nickel-iron alloy, to detect spin currents. While previous spintronic devices have relied on complex structures made with rare and expensive metals such as platinum, the new devices are made from inexpensive, abundant materials that operate at room temperature. The layers were also made with a process called sputtering, which is widely used in electronics manufacturing.

"These results bring the ubiquitous Si (silicon) to forefront of spintronics research,” the team notes in the abstract for their paper, published in the journal Applied Physics Letters. The work was led by UCR's Sandeep Kumar, an assistant professor of mechanical engineering.

In two other scientific papers, members of the same team demonstrated the generation of a key property for spintronics materials, called antiferromagnetism, in silicon. Whereas ferromagnetism is the property of magnetic materials in which the magnetic poles of the atoms are aligned in the same direction, antiferromagnetism is a property in which neighboring atoms are magnetically oriented in opposite directions. The researchers used the two types of silicon found in transistors and other electronic components to generate the property: n-type, which is “doped” with substances causing an abundance of negatively-charged electrons; and p-type, doped to have a large concentration of positively-charged “holes.”

“The observed emergent antiferromagnetic behavior may lay the foundation of Si (silicon) spintronics and may change every field involving Si thin films,” the team notes in one of the papers. “These experiments also present potential electric control of magnetic behavior using simple semiconductor electronics physics.”

Kumar and his colleagues are now developing technology to achieve the ultimate goal of spin transistor creation: the ability to switch spin currents on and off in the materials. They are also working to generate higher-voltage spintronic chips. The end result could be extremely low-power, compact transmitters and sensors, as well as energy-efficient data storage and computer memories.