Continuous electrical humming noise can be very annoying and may be harmful to hearing.

Noise is an unwanted, loud or confused sound which is meaningless but disruptive to hearing. There are typically two different types of noise: acoustical and electrical.

Acoustical noise is any unwanted sound or vibration that is audible to the human ear or tangible via touch.

Electrical noise is, by literal definition, not particularly audible or discernible by tactile interaction with the component or equipment.

Electromagnetic interference (EMI) falls under the category of electrical noise. A basic change of state (such as on/off) in an electronic component has the potential to generate EMI. Typical examples are electronic switches, clocks, electronic controls, power supplies, inverters, fluorescent lights and motor brushes. The EMI noise can be either radiated through the air or conducted through the power line, which includes common mode noise and differential mode noise. [2]

Common mode noise is a signal transferring between all the lines in the same direction to the ground in a circuit. 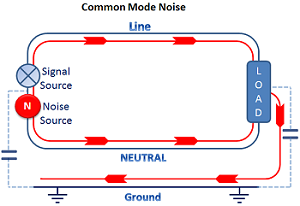 Differential mode noise is a signal conducting between the voltage common collector and ground in the opposite direction. 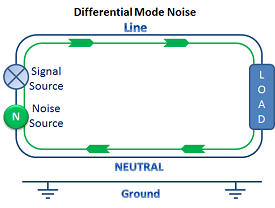 Common mode chokes (CMC) are made up of a single core with two identical coils, which are wound around the core in different directions. 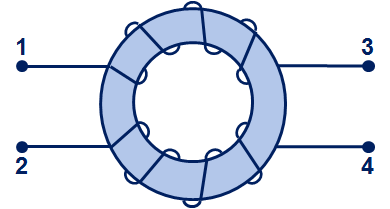 To further understand how CMCs function, when the currents enter a CMC in opposite directions, they produce two magnetic fields in the windings to cancel each other. The choke then presents very little inductance or impedance and the core will not saturate even with large input currents. 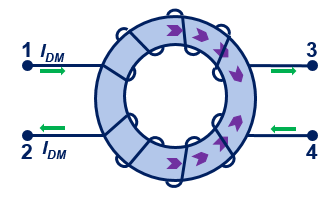 On the other hand, if the currents enter the CMC in the same direction, the two magnetic fields are added together to provide a large inductance or impedance, which plays a role in suppressing common mode noise. 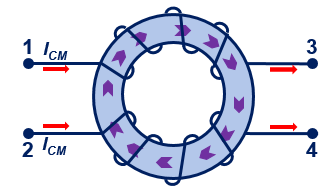 When a CMC is designed to act as a filter in the circuit, it attenuates the energy down to a given frequency, which reduces the unwanted noise entering the load. The choke then produces a large inductance and filters out the common mode noise only, but allows the differential mode signal to pass through the filter. 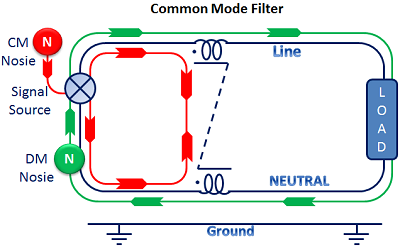 Impedance is the AC equivalent to a concept of resistance in DC; it is a comprehensive expression of forms of opposition to electron flow, including both resistance and reactance. It presents in all circuits and in all components. The reactance could be inductive or capacitive. When alternating current goes through impedance, a voltage drop is produced that is somewhere between 0o and 90o out of phase with the current. Impedance is mathematically symbolized by the letter Z and is measured in ohms (Ω);[3] it is essentially resistance ® plus reactance (jX). 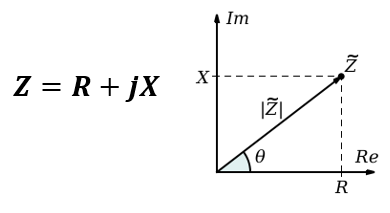 When the net reactance is inductive only,

and becomes the inductive impedance.

Table 1 shows a few different winding techniques: single-layer, multi-layer and cross winding. All of them are using round copper wire with diameter of 0.8 mm and round with 22 turns. They all come out with similar inductance, DCR and parasitic capacitance. But the single-layer shows the lowest leakage inductance with higher SRF. Cross winding also shows high SRF, but this technique is hard to wind and not compatible with machine winding as well. 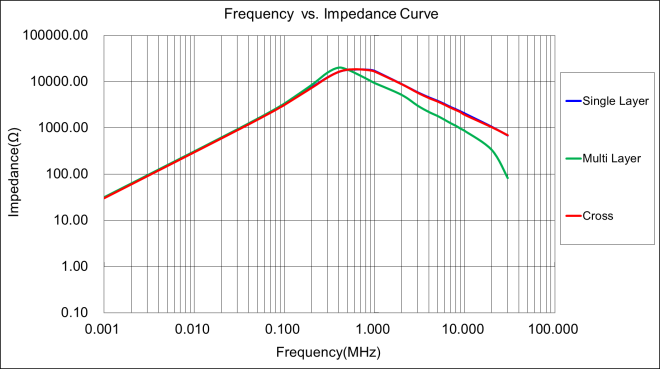 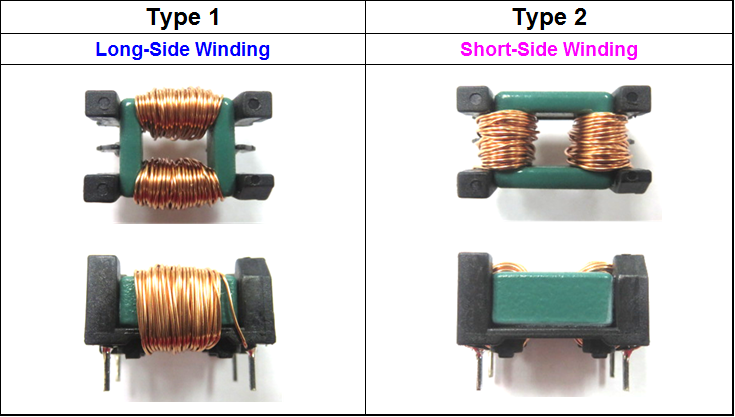 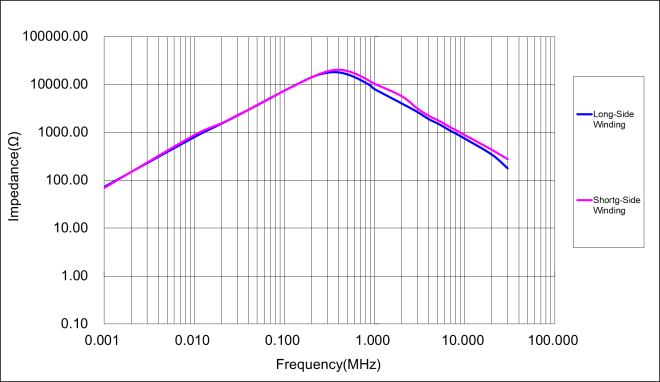 From the electrical result in Table 2, with the same round wire of 0.4 mm diameter and wind 48 turns, the short side winding gave a higher leakage inductance and was more difficult to wind compared to long-side winding. 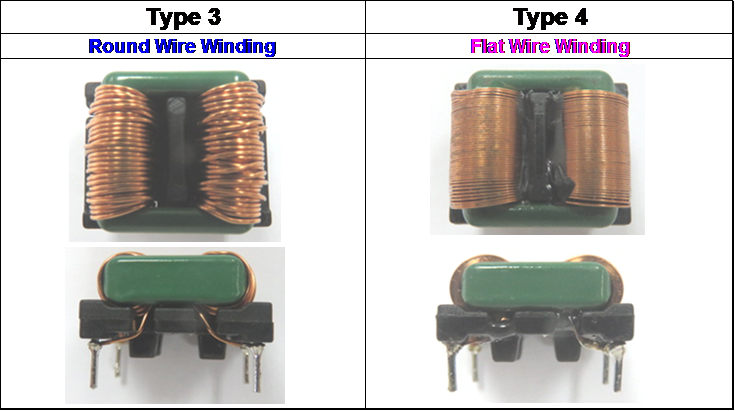 Figure 13: Round wire vs. flat wire

Table 3: Round wire vs. flat wire

Fig. 13 shows two identical cores with round wire of 0.4 mm diameter on the left, compared to flat wire of the same cross sectional area on the right, with the identical 48 turns. From Table 3, the electrical result shows the flat wire winding comes out with a little higher leakage inductance, but it also shows lower DCR with less than half parasitic capacitance. The SRF of flat wire is more than double compared to the round wire. The Figure 14 impedance curves show a big jump in the SRF for flat wire comparing to the round wire. This tells us that the flat wire will offer superior noise suppression performance at higher frequency. 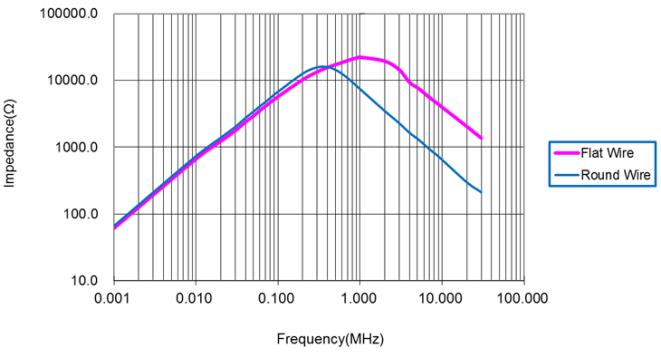 It is easy to tell from Table 4 that the flat wire offers the highest impedance at the highest frequency of all the four comparison above.

Finally, here is a comparison between the traditional T-core with round wire versus rectangular core with flat wire. 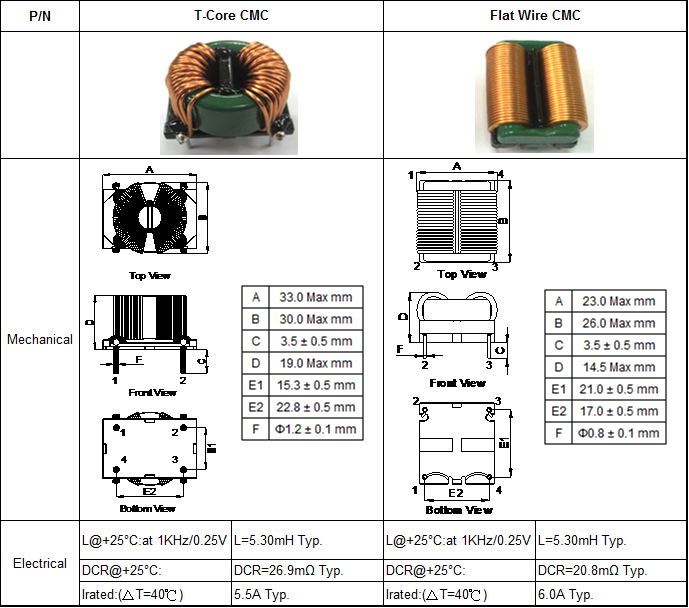 Table 5: T-Core with round wire vs. rectangle core with flat wire 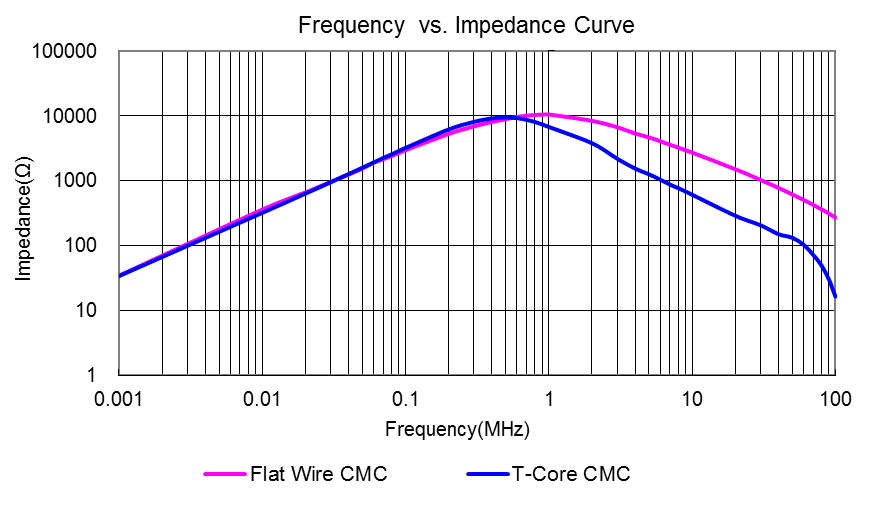 From the mechanical result shown in Table 5, the area of the flat wire CMC is much less than the T-core CMCs, which can save almost 40 percent on the PCB layout. It also has a lower profile to save about 25 percent in height. The total volume can then save over 54 percent and flat wire CMC comes with 1.2 times the power density of the traditional T-core. From the electrical result, with the same level of inductance, flat wire CMCs offer lower DCR and higher current level. The impedance curves on Figure 15 also show that the flat wire CMC offers higher impedance with higher frequency.

In conclusion, impedance becomes much more important in the CMC design at higher frequency. By looking at a number of different winding techniques and wire comparisons, the flat wire with rectangular core body CMC shows its best result with the following:

· The single-layer winding design lowers the skin effect and creates higher performance at a higher frequency.

· The higher power density results in up to 50 percent space saving.