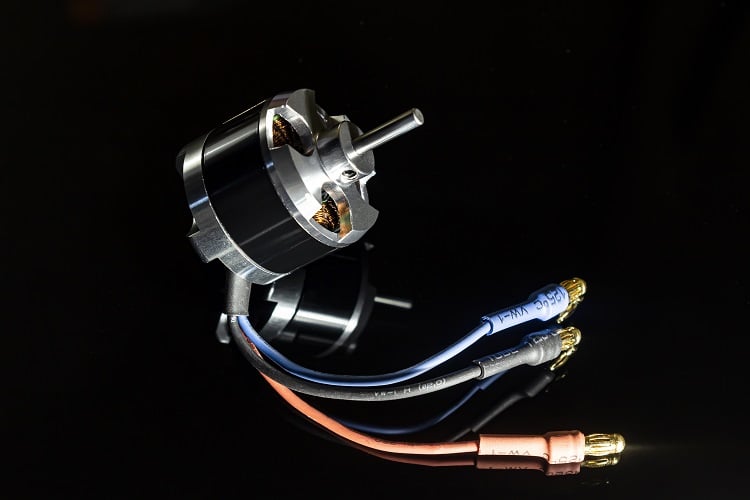 Brushless DC (BLDC) motors are famous due to their use in many applications. They are also known as synchronous DC motors. Their performance is much better than traditional DC motors because of their use of electrical commutators. Commutation is required to ensure that the produced torque is acting in one direction. With the help of electrical commutation, these motors succeed in providing a smooth synchronous motion, which is an important requirement for many applications. Apart from this, their high power to weight ratio, electronic control and high speed make them suitable for use in many products. These motors are widely used in disk drives, printers and automobiles.

Like any other motor, the BLDC motor also has a stator and rotor. The main difference between a BLDC and a standard DC motor is the absence of mechanical brushes for commutation. In these motors, the commutation is done with the help of an electric switch circuit. BLDC motor stator windings can have two winding patterns: Delta (Δ) or Star (Y). When the application requirement is to get high torque at low RPM, then Star winding is used. Delta winding is used when the application requirement is to get low torque at low RPM. There are three available configurations of these motors: single-phase, two-phase and three-phase. Three-phase configuration is used in most applications.

The working principle of BLDC motors is the same as that of DC motors. Both need a feedback network to know the position of the rotor and then adjust the polarity of stator windings to provide the torque in one direction. In DC motors, feedback is implemented with the help of mechanical commutators, whereas in BLDC motors, the feedback is implemented electrically with the help of Hall sensors and encoders. The stator has three windings and the job of commutation is to keep one winding positive, one negative and one off (no power). The winding polarity has to be changed with respect to the position of the rotor. The attraction and repulsion between the stator winding and permanent magnet (PM) of the rotor produces torque. The stator winding needs to change the polarity because maximum torque could reach 90°. The torque starts decreasing as the angle starts decreasing, therefore, it is necessary to change the stator winding polarities according to the rotor position.

Most BLDC motors use three Hall sensors that feedback the rotor position every 60°.

A BLDC motor can be controlled with the help of Hall sensors and a power electronic system.

Hall sensors detect the rotor position and generate a high or low signal according to the position of the rotor. These signals feed into the “Inverter Gate signal generation” block, and these gates will be instructed by a microcontroller to control the transistors according to the rotor position reported by Hall sensors. It will keep switching transistors in a way that only two windings will be energized at a time, and the third winding will have no power. The switching sequence changes every 60°, so it is a six-step commutation control cycle. It will commutate six times to complete a 360° cycle. According to the circuit, the six switching steps of transistors will be (AH, BL), (AH, CL), (BH, CL) (BH, AL), (CH, AL) and (CH, BL).

This switching will change each 60° of rotor rotation. Thus, a 360° rotation will complete in these six switching steps. These steps will repeat after a complete rotation of the rotor.

Controlling a BLDC motor with Hall sensors has advantages such as low-cost hardware design, simple control algorithm and higher motor RPM. However, the phase current waveform is similar to square waves that have some disadvantages, such as low efficiency, large torque ripples and current noise.