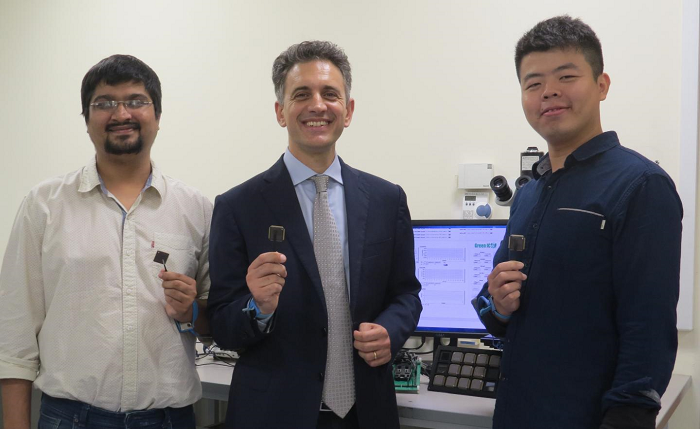 BATLESS, a smart microchip developed by a team of researchers led by Associate Professor Massimo Alioto (center) can self-start and continue to operate even when the battery runs out of energy. Source: National University of Singapore

Energy self-sufficiency is crucial to realizing long service life and low maintenance requirements in internet of things (IoT) components. Batteries currently integrated into these systems are large and expensive, and are usually recharged slowly by solar cells or other energy harvesting options. Downsizing battery units is not optimal for these applications, as smaller batteries discharge fully more frequently.

A solution in the form of a new microchip that continues to operate even when the battery runs out of energy has been engineered at the National University of Singapore. The BATLESS architecture relies on a novel power management technique that allows the device to self-start and keep functioning under dim light without any battery assistance. The design leads to battery indifference — the ability for IoT devices to continue operations even when the battery is depleted.

The key is a very small on-chip solar cell, a design which can lead to marked reductions in the size of batteries needed to power IoT sensor nodes. This can translate into batteries one-tenth the size of those available and lower production costs.

When battery energy is available, the BATLESS chip runs in minimum-energy mode to maximize battery lifetime. When the battery is exhausted, the chip switches to minimum-power mode and operates with a power consumption of about half a nanoWatt, about a billion times smaller than the power consumption of a smartphone during a phone call. Power can be provided by a very small on-chip solar cell that is about half a square millimeter in area, or other forms of ambient energy such as vibration or heat.

The capacity to switch between minimum energy and minimum power mode supports aggressive miniaturization of batteries from centimeters down to a few millimeters. The BATLESS microchip enables the uncommon capability to uninterruptedly sense, process, capture and timestamp events of interest, and for such valuable data to be wirelessly transmitted to the cloud when the battery becomes available again.

Even in minimum-power mode when battery is not available, the reduced speed of the microchip is still adequate for numerous IoT applications that need to sense parameters that vary slowly in time, including temperature, humidity, light and pressure. According to the researchers, the 16-bit microcontroller can also operate 100,000 times faster than others that have been recently designed for fixed minimum-power operation.

BATLESS is well suited for smart buildings, environmental monitoring, energy management and adaptation of living spaces to occupants' needs. The researchers will next test new solutions to build complete battery indifferent systems that cover the entire signal chain from sensor to wireless communications.