Exercise is an essential part of life. It can prevent disease, boost mental health, boost life quality and overall just make you feel good. But for people who want to take exercise very seriously, it can get expensive. A personal trainer costs an average of $50 per hour-long session, according to WebMD. This doesn’t include the cost of the membership to the gym. There are some alternatives, like low-cost or free apps. But these cheap options often aren’t tailored to an individual’s needs. The workouts offered on these cheap alternatives are usually low-quality and not helpful. So what are people who can’t afford a trainer supposed to do? 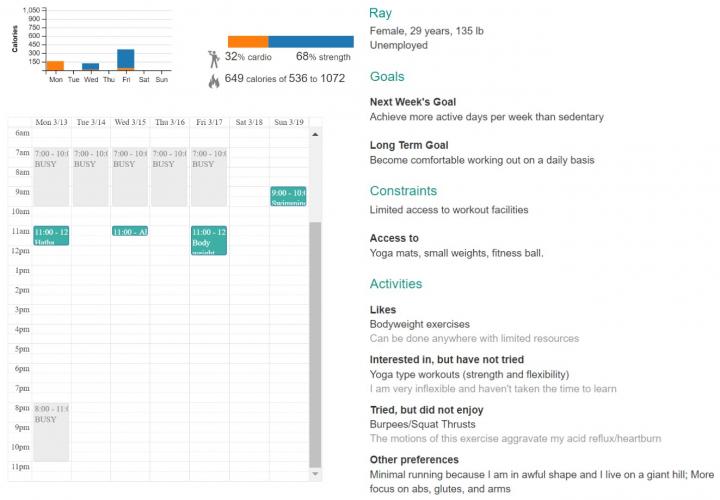 Screen capture of a portion of a CrowdFit user's profile. Source: University of Washington

Researchers from the University of Washington and Seattle University have set out to solve this problem by creating CrowdFit. CrowdFit is a platform for exercise planning that relies on crowdsourcing from nonexperts. The platform creates workout regimens that are guided by national exercise recommendations. It also tailors the workouts around the user’s schedules and interests.

In field evaluations, nonexperts were able to create exercise plans that were just as effective as expert plans under certain conditions. CrowdFit improved the quality of exercise plants that were created by the nonexperts. The plans created by nonexperts using Crowdfit had more appropriate levels of exercise tailored for each person, featuring a progression of activities from week to week, appropriate strengthening routine, better composition and more.

"Most apps available to the public offer limited ability to customize an exercise plan — criteria like goals, age and weight," said lead author Elena Agapie, a UW doctoral student in the Department of Human Centered Design and Engineering. "With CrowdFit, we designed greater flexibility to customize exercise plans to a user's schedule, constraints and nuanced preferences."

On the Crowdfit platform, a user creates their own personal profile that has information about their daily work schedule, interests and exercise plans. Then Crowdfit provides exercise and health guidelines for them to follow when crafting their week-long exercise plan. The plan is shown with detailed schedules with suggestions on when to exercise, a justification for the exercise and other encouraging notes. Once the user has completed the week of exercises and provides the platform with a review of the week. From there Crowdfit crafts an updated schedule for the upcoming week.

"We previously saw that people can craft plans for others that are challenging and interesting, but also had shortcomings with respect to exercise science," said senior author Sean Munson, a UW assistant professor of human-centered design and engineering. "In this study, we set out to test whether supporting planners with information on exercise science and feedback from users could help them produce plans that are also high-quality in this respect."

"By involving nonexperts in the process, there's also an opportunity to increase these nonexperts' exercise knowledge, ultimately benefiting not just the users, but also the planners," said co-author Gary Hsieh, a UW associate professor of human-centered design and engineering.

The CrowdFit study involved 46 participants, who were divided into three groups that each received a customized exercise plan based on their individual CrowdFit profile.

The study found that the exercise plans created by nonexperts were just as effective as pre-prepared plans. The CrowdFit plans were reported to be easier to understand that the expert plans while meeting the recommended exercise guidelines.

"Our study has demonstrated that nonexperts can be guided through designing an exercise plan that is consistent with national recommendations," said co-author Molly Welsh, an assistant professor of kinesiology at Seattle University. "There may not yet be a substitute for a trainer prompting a person through a routine on the gym floor, but the role of the expert is expanding to become more collaborative with the tech industry in guiding future design choices of apps."

The team is now focusing on improving CrowdFit based on the reviews from the study. CrowdFit needs more exercises that improve flexibility and more encouraging warm-ups and cool-downs.

The paper on CrowdFit was presented at the 2018 CHI Conference on Human Factors in Computing Systems in Montreal.