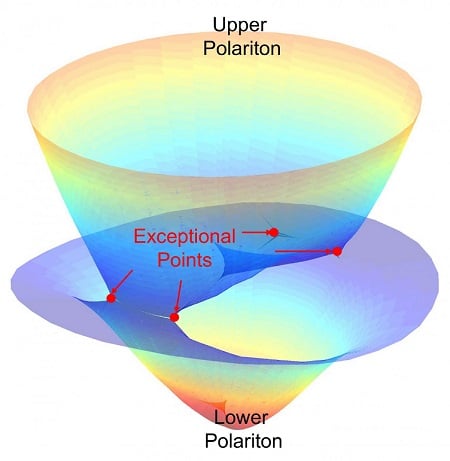 'Exceptional points' in the polaritrons formed by light-matter couplings could allow new explorations in quantum technologies. Source: Weilu Gao/Rice University. A team at Rice University has hit upon the ability to tune the coupling transition of light and matter confined in a vacuum – something that may give researchers the opportunity to explore novel quantum technologies, such as advanced information storage and one-dimensional lasers.

The team’s leader, physicist Junichiro Kono, has previously reported on the manipulation of electrons with light and a magnetic field; by corralling photons and excitons (bound electron-hole pairs) in solids in 2016, he and his team were able to form condensed matter in a quantum well. That same year, Kono also reported on the production of highly-aligned, wafer-sized films of single-walled carbon nanotubes. The new work combines those techniques and uses polarized light to trigger the formation of polaritrons – quasiparticles representing strongly-coupled light and matter – inside the one-dimensional nanotubes, in a cavity at room temperature.

Polaritrons can resonate only along the length of the aligned nanotubes, so they appear when incoming light is polarized in the same direction. When turned 90 degrees, they progressively disappear. The angle at which this happens is known as the “exceptional point” – something that Kono and lead author Weilu Gao didn’t consider important at first.

But a theorist who was shown the data pointed out that the feature was similar to a characteristic of graphene – a point that appears where the material’s conduction and valence bands connect to make it a perfect electrical conductor. This point is known as a Dirac point, or energy-zero point; it separates graphene from solid semiconductors like gallium arsenide or silicon, in which an energetic separation is maintained between those bands. That separation is known as a band gap.

"In our case, we have a kind of band gap between the upper and lower polaritons when polarized light is parallel to the films,” Kono explained. “But turning the light polarization changes everything. When you hit the exceptional point, the band gap closes and polaritons disappear."

Exceptional points have been studied in other contexts; recently, scientists showed how light itself could be slowed or even stopped at such a point.

According to Gao, the new experiment suggests that it may be possible to create photons, which are elemental particles of light, from a vacuum. This could be utilized as a way to extract data from qubits used in quantum-level storage.

"There are theoretical proposals for converting virtual photons into real photons,” said Kono. "We could have matter inside a cavity interacting with the vacuum, and when we trigger the system somehow we destroy the coupling, and suddenly photons come out. That's an experiment we want to do, because producing photons on demand from a vacuum would be cool."

The research appears in the journal Nature Photonics.