The domain of parallelized quantum information processing opens new possibilities for precise measurements, communication and imaging. Precise control of multiple stored photons means that it can handle large amounts of subtle information efficiently. In the Quantum Memories Laboratory the University of Warsaw, a group of laser-cooled atoms has been used as a memory, which can store up to 665 quantum states of light at the same time. 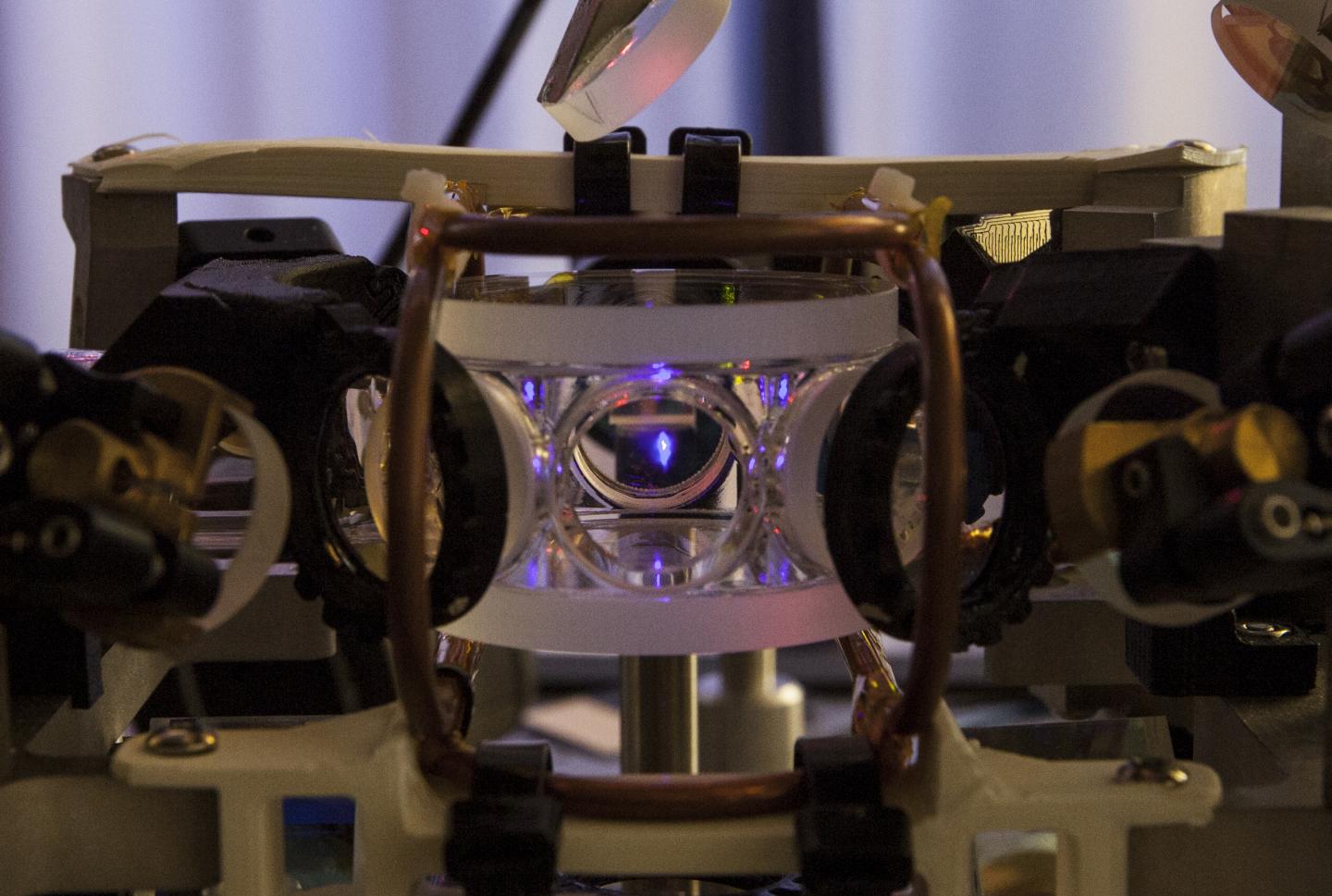 This is a cooled and trapped cloud of cold atoms used to realize the quantum memory protocol. The atoms reside in the center of the vacuum chamber, around which the magnetic coils necessary to trap the atoms are visible. The blue color is caused by two near-infrared lasers illuminating the atoms and driving a two-photon transition, which results in spontaneous emission of visible blue light. Source:FUW, Mateusz Mazelanik

Every information processing task requires a memory. A quantum computer, for example, could not be built without a quantum memory — some device capable of storage and on-demand retrieval of quantum states. The key parameter of this memory is its capacity, or the number of qubits the memory can effectively process. Simultaneous operation on many qubits is key to efficient quantum parallel computation, which provides new possibilities in the fields of imaging or communication.

The on-demand generation of many photons is still a major challenge for many researchers who are dealing with quantum information. In order for recent, widely used methods of multiplexing many single photon emitters into one network, the complexity of these experimental systems grows with the advantages. But with a quantum memory, a researcher could generate a group of a dozen photons within seconds, rather than years. Spatial multiplexing is one of many methods of encoding information about single photons in a quantum memory, and it is aided by a single-photon sensitive camera that stands out as an effective way to obtain high capacity at low cost.

In the Quantum Memories Lab, a high capacity memory as already been successfully built. The system has the world record for the largest capacity. Other researchers could only harness a few dozen independent states of light.

The heart of this constructed setup compromises a magneto-optical trap (MOT). An MOT is a group of rubidium atoms inside a glass vacuum chamber that is trapped and cooled by lasers around a magnetic field to about 20 microkelvins. The memory-light atoms interface is based on off-resonant light scattering. In the write-in process, the cloud of atoms is light up by a laser beam, resulting in photon scattering. Each scattered photon is emitted in a random direction and then registered on a sensitive camera.

By measuring correlations between emission angles of photons created during the read-in write-out process, the researchers certified that the memory is quantum and that the properties of the generated state of light are not described by classical optics. The prototype quantum memory now takes two optical tables and functions with the help of nine lasers and three control computers.

This research was published in Nature Communications Journal.