A new low-cost 3D bioprinter has been developed by researchers at Carnegie Mellon University. The team modified a standard desktop 3D printer that is commercially available now to create this new bioprinter.

Adam Feinberg, materials science and engineering and biomedical engineering associate professor, and TJ Hinton, biomedical engineering postdoctoral fellow, and Kira Pusch, recent graduate of the masters of science undergraduate program, teamed up to create the 3D bioprinter. The paper they wrote on their project offers complete instruction for printing and installing the syringe-based, large volume extruder (LVE) to modify any 3D printer.

"What we've created," says Pusch, "is a large volume syringe pump extruder that works with almost any open source fused deposition modeling (FDM) printer. This means that it's an inexpensive and relatively easy adaptation for people who use 3-D printers." 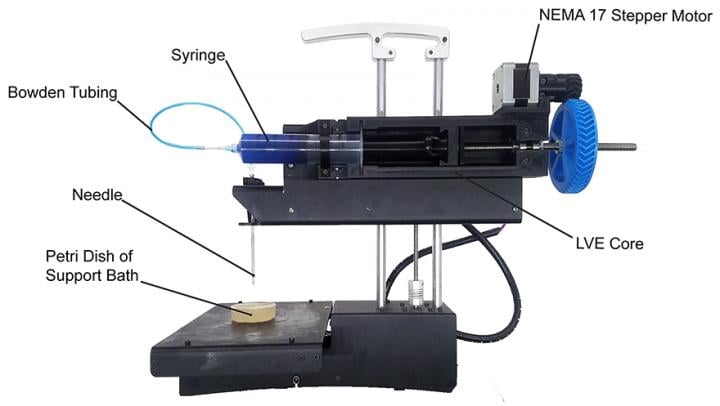 Commercial 3D printers can cost anywhere from $10,000-$200,000. Usually, these printers are proprietary machines, closed source and can be difficult for the owner to modify.

"Essentially, we've developed a bioprinter that you can build for under $500, that I would argue is at least on par with many that cost far more money," says Feinberg, "Most 3-D bioprinters start between $10K and $20K. This is significantly cheaper, and we provide very detailed instructional videos. It's really about democratizing technology and trying to get it into more people's hands."

The LVE cuts down on costs and can print artificial human tissue on a large scale with a high resolution. The Carnegie Mellon team's improvements make this kind of printing much more accessible for researchers, makers and professionals who are experimenting and researching with 3D printing biomaterials.

"Usually there's a trade-off," explains Feinberg, "because when the systems dispense smaller amounts of material, we have more control and can print small items with high resolution, but as systems get bigger, various challenges arise. The LVE 3-D bioprinter allows us to print much larger tissue scaffolds, at the scale of an entire human heart, with high quality. Bioprinting has historically been limited in volume," adds Pusch, "so essentially the goal is to just scale up the process without sacrificing detail and quality of the print."

The next step for the research team is to create an open source biomedical research for other teams to take advantage of and expand upon. By making this biomedical 3D printer accessible for everyone, the team hopes to boost the rapid improvement of biomedical technologies.

"We envision this as being the first of many technologies that we push into the open source environment to drive the field forward," says Feinberg. "It's something we really believe in."

The paper on this research was published in HardwareX.