University of California, Berkeley, researchers have developed a robotic learning technology that enables robots to imagine the future of their actions to manipulate objects they have never encountered before. In the future, this technology could help self-driving cars anticipate future events on the road and produce more intelligent robotic assistants in homes, but the initial prototype focuses on learning simple manual skills entirely from autonomous play. 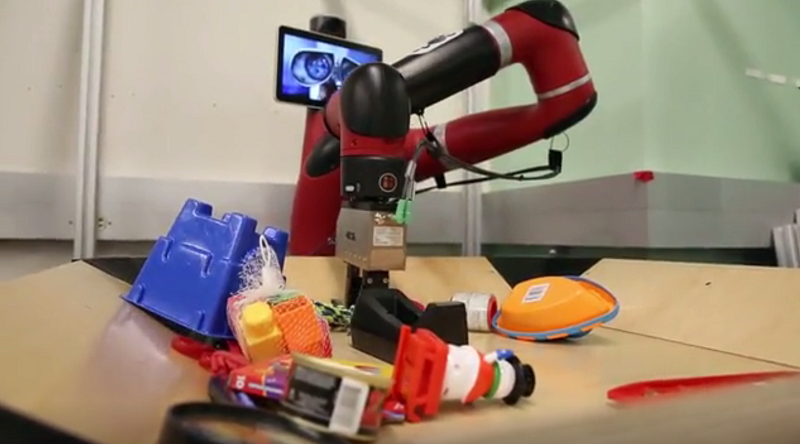 One of the robots that can use this new technology to learn. Source: Roxanne Makasdjian and Stephen McNally

This technology is called visual foresight, and with it, robots can predict what their cameras will see if they perform a particular sequence of movements. The robotic imaginations are still relatively simple, but they are enough for the robot to figure out how to move objects around a table without disturbing obstacles. Crucially, the robot can learn to perform these tasks without any help from humans or prior knowledge about physics, its environment or what the objects are. This is because the visual imagination is learned entirely from scratch from unattended and unsupervised exploration, where the robot plays with objects on a table. After the play phase, the robot builds a predictive model of the world and can use this model to manipulate new objects that it has not seen before.

"In the same way that we can imagine how our actions will move the objects in our environment, this method can enable a robot to visualize how different behaviors will affect the world around it," said Sergey Levine, assistant professor in Berkeley's Department of Electrical Engineering and Computer Sciences, whose lab developed the technology. "This can enable intelligent planning of highly flexible skills in complex real-world situations."

At the core of the system is a deep learning technology based on convolutional recurrent video prediction, or dynamic neural advection (DNA). DNA-based models predict how pixels in an image will move from one frame to the next based on the robot’s actions. Recent improvements to this class of models, as well as greatly improved planning capabilities, have enabled robotic control that is based on video prediction to perform increasingly complex tasks, like sliding toys around obstacles and repositioning multiple objects.

"In that past, robots have learned skills with a human supervisor helping and providing feedback. What makes this work exciting is that the robots can learn a range of visual object manipulation skills entirely on their own," said Chelsea Finn, a doctoral student in Levine's lab and inventor of the original DNA model.

With the new technology, a robot pushes objects on a table and then uses the learned prediction model to choose motions that will move an object to the desired location. Robots use the learned model from raw camera observations to teach themselves how to avoid obstacles and push objects around obstructions.

"Humans learn object manipulation skills without any teacher through millions of interactions with a variety of objects during their lifetime. We have shown that it possible to build a robotic system that also leverages large amounts of autonomously collected data to learn widely applicable manipulation skills, specifically object pushing skills," said Frederik Ebert, a graduate student in Levine's lab who worked on the project.

Because control through video prediction relies only on observations that can be collected autonomously by the robot, like through camera images, the resulting method is general and broadly applicable. In contrast to conventional computer vision methods, which require humans to manually label thousands or even millions of images, building video prediction models only requires unannotated video, which can be collected by the robot autonomously. Video prediction models have also been applied to datasets that represent everything from human activities to driving, with compelling results.

"Children can learn about their world by playing with toys, moving them around, grasping, and so forth. Our aim with this research is to enable a robot to do the same: to learn about how the world works through autonomous interaction," Levine said. "The capabilities of this robot are still limited, but its skills are learned entirely automatically, and allow it to predict complex physical interactions with objects that it has never seen before by building on previously observed patterns of interaction."

The Berkeley scientists are continuing to research control through video production, focusing on further improving video prediction and prediction-based control, as well as developing more sophisticated methods by which robots can collect more focused video data, for complex tasks like picking and placing objects and manipulating soft and deformable objects.