Video: MIT Teaches Robots to Learn Tasks from Other Robots 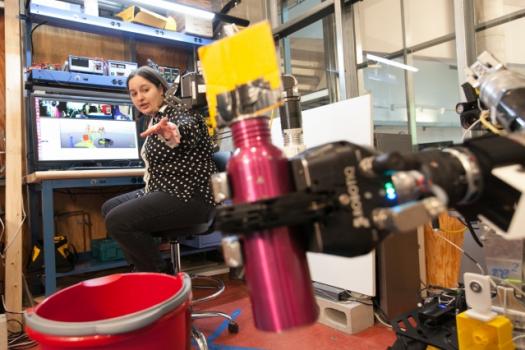 Robots are programmed through either learning through demonstration or motion-planning techniques like optimization or sampling.

But both methods have disadvantages in that robots can’t easily transfer one skill they’ve learned to another situation and at the same time remain accurate while motion planning requires a programmer and is time consuming.

MIT’s Computer Science and Artificial Intelligence Laboratory (CSAIL) has developed a system that bridges the two techniques allowing non-coders to teach robots a range of tasks by giving them information about how objects are frequently manipulated and then showing the robot a single demo of the task.

Called C-LEARN, this process allows robot skills to be transferred automatically to other robots that have different ways of moving saving time and costs.

“By combining the intuitiveness of learning from demonstration with the precision of motion-planning algorithms, this approach can help robots do new types of tasks that they haven’t been able to learn before, like multi-step assembly using both of their arms,” says Claudia Pérez-D’Arpino, a PhD student at MIT CSAIL.

Researchers tested the system on a two-armed robot designed for bomb disposal that the team programmed to perform tasks such as opening doors, transporting objects and extracting objects from containers. The robot then transferred this learned skill to a different machine, a 6-foot-tall, 400-pound humanoid robot.

C-LEARN gives the robot a base of knowledge on how to reach and grasp various objects that have different constraints such as how to configure its arms to move differently.

The operator uses a 3-D interface to show the robot a single demonstration of a task, a sequence of movements known as keyframes. By matching the keyframes, the robot can automatically suggest motion plans for the operator.

“This approach is actually very similar to how humans learn in terms of seeing how something’s done and connecting it to what we already know about the world,” says Pérez-D’Arpino. “We can’t magically learn from a single demonstration, so we take new information and match it to previous knowledge about our environment.”

MIT CSAIL says the system could be used to handle time-sensitive scenarios such as bomb disposal or disaster response where the robots are currently tele-operated at the level of individual joint movements.

While the system can’t yet handle advanced tasks such as avoiding collisions or planning different step sequences for a give task, the team hopes to incorporate more human learning to give robots a wider range of capabilities, MIT says.

“Traditional programming of robots in real-world scenarios is difficult, tedious, and requires a lot of domain knowledge,” says Julie Shah, an MIT professor who worked on the project. “It would be much more effective if we could train them more like how we train people: by giving them some basic knowledge and a single demonstration. This is an exciting step toward teaching robots to perform complex multi-arm and multistep tasks necessary for assembly manufacturing and ship or aircraft maintenance.”

A paper describing C-LEARN was recently accepted to the IEEE International Conference on Robotics and Automation (ICRA), which takes place May 29 to June 3 in Singapore.