Kids Can Build STEM Skills with this Robot and Maker System 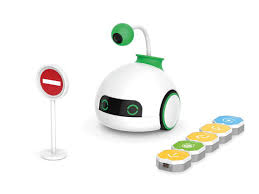 RoboPal stimulates creativity and imagination, and they have fun while they learn new skills for the future through this kid-friendly robot.

STEM (Science, Technology, Engineering and Math) is becoming more important to everyday life all the time. Children need to build a strong foundation in these topics. Kids who show interest in STEM can use RoboPal to learn problem-solving, critical thinking, analytical thinking, if-then logic, working with others and spatial concepts. STEM concepts can often seem complicated for kids, but RoboPal turns these difficult topics into fun games.

Through playing with RoboPal, children are encouraged to construct, engineer and experiment with STEM. RoboPal puts kids’ analytical abilities and problem-solving skills to use without a tablet or app. It teaches them new coding and critical thinking skills in the process.

The three types of coding blocks that come with RoboPal represent the commands that RoboPal will understand. The first is action blocks. Action blocks are for specific movements like moving forward or backward. The second is function blocks that are for sound, time commands and accessory control. The final type of block is logic blocks that have fundamental coding statements, like loop, if, then and or. Kids choose and combine the magnetic coding blocks to build a program for the robot. They then connect the blocks to the robot, press start and the program starts running.

1. Sequential Statements: To control the RoboPal, kids create action sequences for the robot to follow.

2. Debugging and Critical Thinking: If RoboPal doesn’t reach the objective after kids input a command, they can retrace their steps to figure out what needs to be fixed.

3. Loops: Kids will learn that to get certain outcomes, they need to reuse certain code sequences and can be efficient with their blocks.

5. Conditional Statements: Kids will be introduced to If-Then statements through RoboPal. If it runs up to an obstacle, it will need to move in a different direction.

6. Nesting Statement: As they progress, kids learn to add conditional statements inside loops that help them add different elements and form new commands.

RoboPal has 10 USB ports for expandability so kids will never get bored. It has LED lights, fans, additional sensors and more for kids to explore new coding concepts.

RoboPal is also compatible with LEGO, so kids can use their existing toys to create even more games and robot fun.

There are 14 different digital facial expressions and 15 different voices that are loaded onto Robopal for entertainment for everyone. RoboPal has online videos, tutorials and storybooks that teach kids coding concepts and entertain all skill levels.

RoboPal is ready to operate out of the box without any kind of assembly. RoboPal is instructed by magnetic coding blocks that are easy to assemble and disassemble. RoboPal charges through a USB and operates for 6-12 hours, depending on the type of commands.

A Kickstarter for RoboPal has launched and will be available through November 16. The campaign goal is $15,000 and they have $2,810 currently pledged. RoboPal is available to backers who pledge $129 or more.