The design of printed circuit board (PCB) layouts is critical for good circuit performance, and it is as demanding as the circuit design itself. A bad layout hurts performance because it can introduce leakage resistances, voltage drifts and stray capacitance, among other effects. In the special case of PCB layout for operational amplifiers (op-amps), a poor design will affect offset voltages by producing drifts as a function of temperature.

When two dissimilar conductors or semiconductors are joined together and their junction is heated, a voltage is created between them. This phenomenon is known as the Seebeck effect or thermoelectric effect. The arrangement is called a thermocouple junction and the voltage generated as a result of the Seebeck effect is called thermoelectric voltage or, more generally, the electromotive force (EMF). The generated voltage (EMF) is proportional to the absolute temperature of the junction and varies with temperature gradients, creating drifts that will adversely affect the performance of the system.

Figure 1 shows a typical thermocouple. The junction of the two metal wires is at a particular temperature (THJ in the figure), hence, according to the Seebeck effect, a voltage difference is generated between them (V1, V2 at temperature TCJ and V3 at temperature THJ).

When laying out a PCB several thermocouple junctions can be created, adding to the overall error of the system. Some of these include components soldered to a copper pad, jumpers, solder joints, resistors and others. The junctions can generate thermal EMFs in the order of 200 nV/°C, which is more than seven times the maximum drift specification of the MCP6V9x family of operational amplifiers produced by Microchip Technology Inc.

Figure 2 illustrates the thermal EMF voltage generated by the Seebeck effect as a function of temperature for the standard K thermocouple. The response is not completely linear, but for calculation purposes it can be linearized over small temperature ranges (e.g. ± 10° C Most thermocouple junctions found in PCB layout behave similarly. 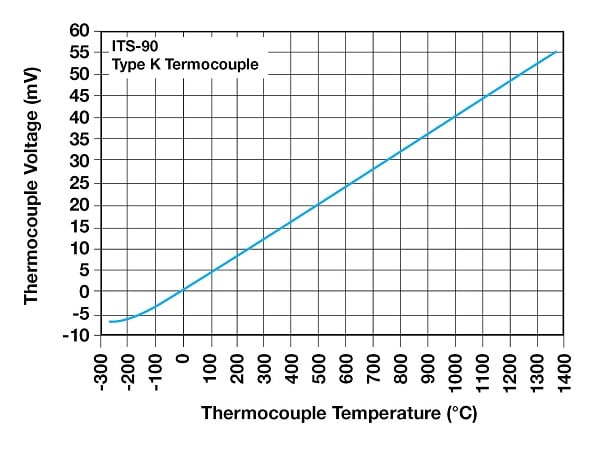 Figure 3 shows a surface-mounted resistor with three types of conductors and four junctions. Each of these junctions will produce a thermal EMF that can adversely affect the accuracy of the circuit. 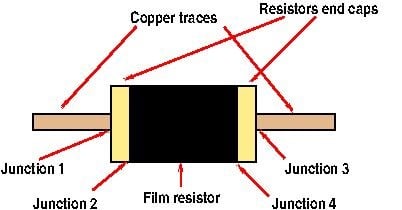 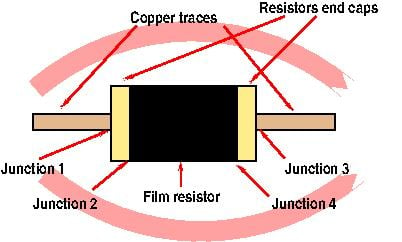 This case assumes that the temperature changes horizontally from left to right, and no change is expected in the vertical direction. In addition, if the following assumptions are made, the total thermoelectric voltage is -38 μV:

This means that the copper trace at Junction 3 is -38 μV. This number is too large compared to the typical offset voltages of high-precision operational amplifiers. To compare the values determined in this example, take the Microchip MCP6V61 zero-drift operational amplifier. This device has a maximum initial offset voltage of only 8 μV and a maximum offset drift of only 15 nV/°C. Design engineers must select precision devices not prone to high power dissipation, and also must organize the components in a way that reduces high thermoelectric voltages. 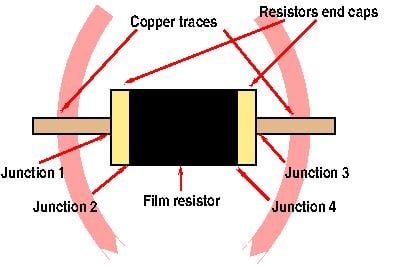 Temperature changes vertically (from top to bottom in Figure 5). In this case all the junctions are at the same temperature. The voltage as a function of temperature is given by:

The full details of this calculation are found in Microchip AN1258 — Op Amp Precision Design: PCB Layout Techniques (.pdf).

There are techniques to prevent large temperature gradients at critical components.

-Reduce heat generation. This is fairly easy to accomplish for low-dissipation components that attach to the board. Some suggestions include:

-Redirect the heat flow. The main goal is to keep a constant temperature in critical areas of the system. Some techniques include:

Microchip Technology Inc. has an extensive family of low-power, high-precision operational amplifiers and instrumentation amplifiers that can satisfy any design requirements for applications requiring extended battery run-time and reduced input offset and drift. Microchip’s zero-drift portfolio includes an auto-zero topology—including the MCP6V01/2/3, MCP6V06/7/8 and MCP6V26/7/8—and chopper-stabilized topology with devices such as the MCP6V11/ MCP6V12/MCP6V14, MCP6V31/MCP6V32/MCP6V34 and MCP6V61/MCP6V62/MCP6V64. These devices offer input offset voltages as low as 2 μV, maximum offset drift of only 15 nV/°C, outstanding high CMRR and PSRR and enhanced EMI rejection.

Thermocouple junctions are unavoidable in PCB layout design. A good design avoids the development of the Seebeck effect, which produces a thermoelectric voltage through these junctions. Some solutions include reduction of the amount of heat generated on the PCB, redirection of the heat flow and preventing abrupt temperature changes. However, for high-precision circuit designers using high precision components, such as Microchip's portfolio of zero-drift amplifiers, isn’t enough. The designer must also ensure that the rest of the design is implemented in a way that minimizes errors so that the performance of these high precision ICs can be fully realized.