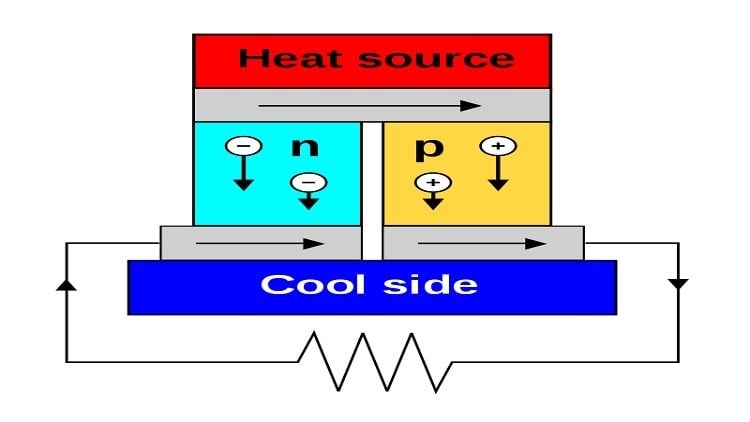 The critical need for environmentally sustainable, reliable and long-lasting power sources is propelling the growth of the miniaturized and embedded electronics industry, which includes wearable and medical implantable products. Owing to its ability to directly transform heat to electricity when conformably attached to heat sources, flexible thermoelectric materials and devices are gaining increased interest. Thermal energy is a readily available source of energy and is used in a variety of sectors, including the operation of electrical devices (computers, phones, integrated circuits and so on), moving vehicles, the operation of buildings, and also the human body.

Thermoelectric generators can transform thermal energy into electrical energy, and hence are active devices. These devices are composed of markedly different thermocouples bound thermally in parallel and electrically in series, based on the Seebeck effect. In this physical phenomenon, the change in temperature between two different semiconductors or electrical conductors produces a potential difference between the two substances. As one of the conductors or semiconductors is heated, the hot electrons migrate into the colder one. They are usually composed of numerous thermopiles (made up of many thermocouples) connected to maximize the output power.

The second thermoelectric generator architecture (lateral thermocouple arrangement) utilizes a lateral thermocouple structure to transform flow of heat laterally. This design structure is also known as a planar thermoelectric generator, as thermocouples are deposited or printed on the substrate surface. The primary benefit of such technique is its capability to control the length and thickness of every thermocouple arm, as well as its appropriateness for thin film deposition, which enables the development of thinner and longer thermocouples than is possible for other forms.

Additionally, the second configuration raises the thermoelement’s thermal resistance in comparison to other thermoelectric generator architectures due to the use of long thermocouple arms, which results in an increasing temperature gradient, and gradually a rising output voltage. The final thermoelectric generator architecture, also known as mixed, is comprised of thermocouples placed on the substrate in the lateral direction, with the heat flowing vertically. Vertical heat transfer was facilitated by filling the substrate present below the thermocouple arms with micro-cavities. This method can be implemented in silicon using a liftoff process in flexible polymer/polyimide foil or using complementary metal-oxide semiconductor (CMOS) standard technologies.

Thermoelectric generators can be manufactured using a range of technologies and fabrication methods based on a variety of substrate materials. For example, silicon technology enables the creation of small thermoelectric generators with dimensions on the order of nano- to micro-meters. Both compatible, for example, silicon nanowires and poly-silicon-germanium, and incompatible materials, such as antimony-tellurium-bismuth alloys and CMOS, are being utilized for manufacturing the thermocouple arms. Additionally, CMOS technology enables the silicon substrate to form micro-cavities and stop heat from being dissipated below the hot junctions.

Low-temperature co-fired ceramic- and alumina-dependent methods enable the construction of multilayered thermoelectric generators with a high density. Evidently, using ceramics technology in the fabrication of thermoelectric generators would be beneficial due to its multilayer deposition capability, low expenses, simplicity, rapid fabrication time and high resistance to harsh conditions such as high temperatures and stresses.

Thermocouples may also be manufactured using dense, thin or blended (thick/thin) deposition methods in ceramic-based technologies. Thick film thermocouples are manufactured by screen printing a variety of various content pastes such as nickel, platinum, silver, palladium-silver and tungsten. The most suitable substrates for making flexible thermoelectric generators for wearable devices are polymers, cellulose fiber-based and fabric. Screen printing is used to fabricate thick films, while electro-deposition, evaporation or sputtering is used to fabricate thin films.

Thermoelectric generators are commonly used in a variety of fields due to their appealing characteristics, which include low maintenance, energy efficiency and long energy harvesting life. They offer several benefits, including ease of construction, lack of mechanical components, long service life, minimal upkeep and an environmentally friendly nature (because of the absence of chemical products).