As NASA Curiosity rover roams the surface of Mars, its ChemCam captures the chemical makeup of its surroundings with a specially designed laser system. It is the most powerful laser to operate on the surface of another planet. The burst of infrared light that the laser fires lasts only a few billionths of a second, but it is powerful enough to vaporize the spot it hits at more than 8000 degrees Celsius. The ChemCam can examine rocks and soil from a distance using a process called Laser-Induced Breakdown Spectroscopy (LIBS) where laser bursts atomize and excite components and spectral images to capture their chemical signatures. 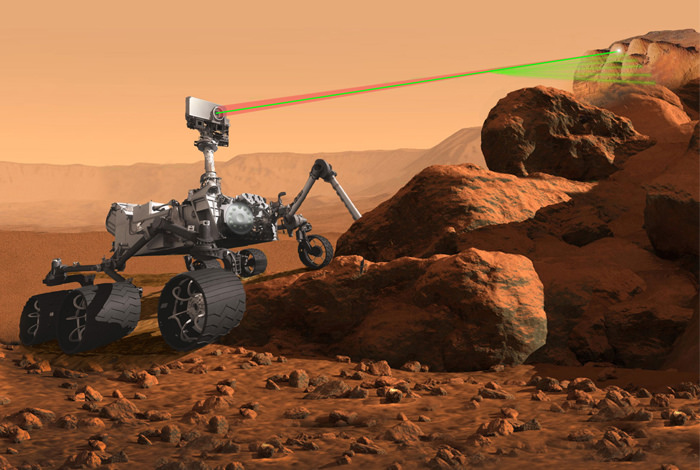 On Earth, scientists are already building the next generation’s ChemCam for the NASA Mars 2020 rover with upgrades and new spectral capabilities. Along with a faster LIBS system, the SuperCam will feature a new conduction-cooled laser system to provide a non-destructive analysis ability of Raman spectroscopy that is capable of detecting carbon-based signatures of organic materials.

The Centre National d’Etudes Spatiales (CNES) and the Research Institute in Astrophysics and Planetology (IRAP), Thales Group are in the final stages of testing the SuperCam system that will eventually endure harsh Martian conditions. The team has already built and tested a full representative model of this research.

The new instrument will be able to switch between a LIBS mode and Raman mode of lasing, which requires two different laser colors to excite and probe molecular vibrations energies for its non-destructive chemical identification. The second color is produced by a crystal that doubles the 1064-nanometer frequency that is used for LIBS measurements and produces 10 times as many shots in each burst of the laser for faster sampling.

The second 532-nanometer beam will allow Mars 2020 to detect molecular structures evident of organic matter and evidence of past life. The optical architecture required to produce the two operation modes was not without its challenges.

The upgraded LIBS oscillator uses a diode-pumped Nd:YAG crystal instead of ChemCam’s Nd:KGW that provides longer bursts but requires new methods to ensure functionality over a large temperature range. Because the Nd:YAG absorbs over a narrow range of frequencies to lase at a given temperature, the SuperCam uses a multicolor diode that can pump with a wide spectrum to account for a range of temperatures.

"This laser is running in burst mode, but with this laser, we can do 1000 shots in one burst while the ChemCam laser was 10 timeless," said Eric Durand, one of SuperCam's developers at Thales Group, France. "We longitudinally pump this laser with a stack which is a broadband emitting so that when the temperature is changing, the ND:YAG crystal is still absorbing the light and the laser can be used over at least 50 to 60 degrees without temperature regulation."

"The most difficult aspect was to achieve the temperature range also with the green wavelength because we have to keep the efficiency over the whole range, and it was only possible by heating a little the KTP crystal," said Durand.

The temperature stabilization that is required to keep the system aligned and working for either mode is difficult to achieve in a lab, but the system was designed to have the same stability while on the rover as it goes over the rocky Martian terrain. It has to meet tight size and weight restrictions that come with space travel and stay free of contaminants that would destroy its components, which is a feat achieved by sealing the instrument with laser welding.

The abilities of the new SuperCam will be an invaluable chemical probe for the Mars 2020 rover and might bright life to new findings to bring back to use here on Earth.

The results of the research will be presented during the OSA Laser Congress, October 1-5, 2017 in Nagoya, Japan.