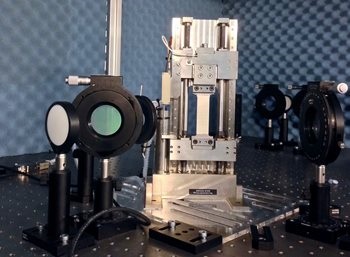 Researchers used a tensile machine to pull a metal specimen with a ceramic thermal barrier coating sprayed on its surface, after which changes in refractive index were measured. Some of the components of the GHz polariscope are seen on either side of the tensile machine. Source: Peter J. Schemmel, Heriot-Watt University

Weak areas in ceramic thermal barrier coatings that protect jet engine turbines from high temperatures and wear can be identified with an optical analysis technique. The procedure, which was developed at Heriot-Watt University in the UK, could be used to predict how long coatings would last on an airplane. The strain-measurement method might lead to new thermal barrier coatings, making engines more efficient and cutting both the cost and pollution of air travel.

Airplane turbine blades are scheduled for replacement based on the shortest estimated lifetime, since the lifetime is unpredictable and failure during flight could be catastrophic.

“Our strain-measurement technique can analyze the coatings immediately after manufacturing and work to identify the turbine blades that would last the longest in the airplane,” said leader of the research team, Andrew J. Moore. “Ultimately, we want to develop an imaging device that would show the strain distribution in the coating of an entire turbine blade, information that would be used to decide if that turbine blade would go into service.”

The research has demonstrated that changes in refractive index, a measure of how fast light travels through a material, could be observed when a piece of metal coated with a ceramic thermal barrier coating was pulled in a controlled manner.

“If we can correlate how the strain distribution is related to the coating’s lifetime, then we could determine which coatings will fail first and shouldn’t be put into an aircraft and which ones will last much longer,” said Moore. “This would increase the time between services significantly, which would bring huge savings.”

The technique relies on gigahertz (GHz) illumination, as these wavelengths can travel though some opaque materials, such as ceramics, allowing analysis from within the material. Tests were conducted with pieces of metal sprayed with the same ceramic coatings used on Rolls Royce turbine blades.

A tensile machine applied strain by slowly pulling the metal, and then GHz illumination (280-380 GHz) traveled through the ceramic coating and bounced off the metal beneath. The reflected light was measured using a polariscope to determine how the refractive index of the ceramic changed with the applied strain.

The current optical setup only acquires point-based measurements, but the technique could be used with an imaging setup to analyze an entire blade.