(VIDEO) With a Robotic Touch 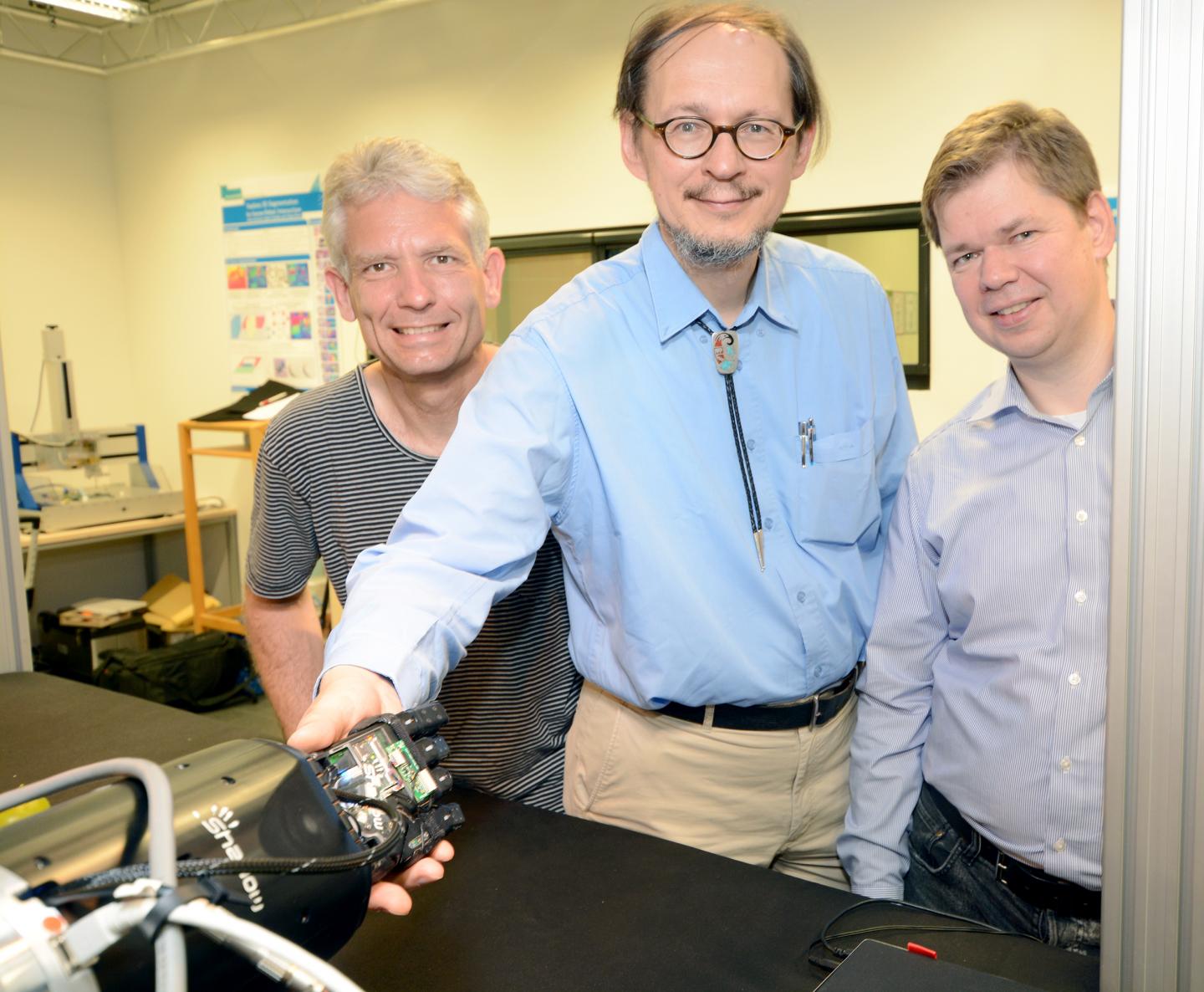 Some of the FAMULA team, shaking hands with their robot. (Credit: Bielefeld University)Robot hands that familiarize themselves with objects by grasping them.

This isn’t sci-fi; it’s something that’s been developed at the large-scale research project FAMULA, at Bielefeld University in Germany. The hands are shaped like human hands, with similar mobility; the robot brain that controls them has to learn how to distinguish different types of everyday objects based on their color or shape, in order to know how best to handle them.

“Our system learns by trying out and exploring on its own -- just as babies approach new objects," says neuroinformatics professor Dr. Helge Ritter, who heads the FAMULA project together with sports scientist and cognitive psychologist professor Dr. Thomas Schack and robotics expert Dr. Sven Wachsmuth.

Work in artificial intelligence along with research from other disciplines was instrumental in developing a system that could recognize object characteristics and construct models for interacting with different types of objects. Schack’s research group, for example, studied which objects test subjects perceived to be significant in terms of grasping objects. "It was surprising that weight hardly plays a role,” says Schack. “We humans rely mostly on shape and size when we differentiate objects.”

The system also relies on a human “mentor” to acquire familiarity with novel objects. One of Ritter’s colleagues, Dr. Robert Haschke, stands in front of a large metal cage with both robot hands and points to individual objects on a table, or gives spoken hints as to where to find them (e.g., “behind, at left"). The system perceives its surroundings via color cameras and depth sensors, and reacts to instructions.

Wachsmuth and his team are responsible for the system’s language capabilities – both in terms of spoken words and gestures. They have also given the system a face, in the form of a stylized robot head called Flobi, that complements language and actions with facial expressions.

The university’s Cluster of Excellence Cognitive Interaction Technology (CITEC), where FAMULA is based, has invested into the project approximately one million euro through funding by state and federal governments. The basic research happening though FAMULA is intended to benefit self-learning robots of the future for both home and industry. “We want to literally understand how we learn to 'grasp' our environment with our hands. The robot makes it possible for us to test our findings in reality and to rigorously expose the gaps in our understanding,” says Ritter. “In doing so, we are contributing to the future use of complex, multi-fingered robot hands, which today are still too costly or complex to be used, for instance, in industry.”

FAMULA, which stands for "Deep Familiarization and Learning Grounded in Cooperative Manual Action and Language," has been running since 2014 and is currently limited to October 2017. It is one of four large-scale projects at CITEC; other projects include a robot service apartment, the walking robot Hector, and the virtual coaching space ICSpace.