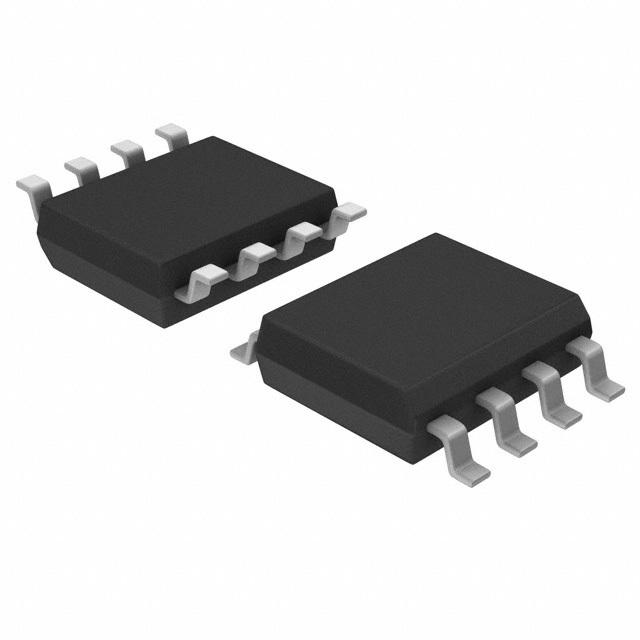 Producing an output voltage that is directly proportional to the logarithm of an input voltage or current, logarithmic amplifier chips are often useful in applications involving signal compression, such as RF and optical systems, and audio or video equipment. The principal objective of a simple log amp is to compress a signal of wide dynamic range to its decibel equivalent. This conversion is achieved by nonlinear transformation, representing the signal from one domain in another.

Compensating for gain changes at different chip temperatures is a concern in logarithmic amplifier design. This can be accomplished through a variety of techniques, including using thermally dependent resistors. Eliminating the effects of thermal voltage on the log amp’s scale factor maintains a constant slope even as temperature changes. In op-amp transistor log amp circuits, using two matched transistors eliminates the reverse saturation current temperature dependence.

Log amplifiers often require careful shielding to produce an accurate output over their full specified dynamic range. A typical demodulating log amp operating in the 50 MHz range with a bandwidth of more than 70 MHz and a gain of 90dB will be susceptible to interference from many sources, such as TV and radio transmissions. Besides shielding, noise pickup in the log amplifier can be nullified by using some method of filtering, such as placing a matching network at the input.

Log amplifiers are sometimes employed in compressing the output of a sensor to enable the use of a more economical analog-to-digital converter. For example, a log amp positioned in front of a low-cost 12-bit A/D converter might produce the dynamic range equivalent of an expensive 20-bit A/D converter used alone.

The basic circuit design for logarithmic amplifiers consists of an operational amplifier and a diode. In many log amps today, a transistor is used in place of a diode to increase the dynamic range of the device.

Logarithmic amplifiers have various designs to fit different applications, with tradeoffs between performance specifications such as noise, temperature drift and dynamic range. DC log amps accept unipolar currents or voltages and output a proportional signal using the inherent logarithmic I-to-V transfer characteristic of pn junctions. They are used with DC signals that change slowly with bandwidths to around 1MHz. They are sometimes referred to as transimpedance, translinear, diode or transdiode log amplifiers.

A typical transimpedance log amplifier outputs a voltage corresponding to the log ratio of an input current and a reference current modified by a scale factor. The ideal transfer function of such a log amp is VIDEAL = K x log10(ILOG/IREF). Adjusting the scale factor K allows alteration of the transfer-function slope, while adjusting the reference current, IREF, allows shifting the logarithmic intercept.

Baseband log amps are used to compress AC signals such as in audio and video circuits. A type of baseband log amp known as the true log amp preserves the polarity of the input, whether positive or negative. 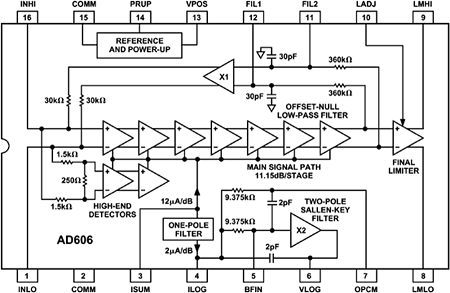 Logarithmic amplifiers are characterized by a number of performance parameters. Logarithmic slope is the scale or rate of the output voltage per decade. Some log amps come with a fixed slope, while others are adjustable. Dynamic range is the range over which the slope remains within a specified error band. Input signal bandwidths of monolithic log amps usually range from 50MHz to 2.5GHz. The accuracy and sensitivity of log amps specify how closely they track to a perfect transfer function and how small a signal they can handle, respectively.

A demodulating logarithmic amplifier with limiter output with 50MHz typical input and 80dB dynamic range is useful over a wide range of signal and power measurements, for ultrasound and sonar processing, and as a phase-stable limiting amplifier to 100 MHz.

A precision logarithmic and log ratio amplifier is used in the communications, analytical and medical industries; for test and general instrumentation; for absorbance and optical density measurement; as a photodiode signal compression amp; and for analog signal compression in front of analog-to-digital (A/D) converters.