Boeing has released its concept for its Deep Space Gateway that would serve as a docking system similar to the International Space Station but used as a waypoint for Mars missions. 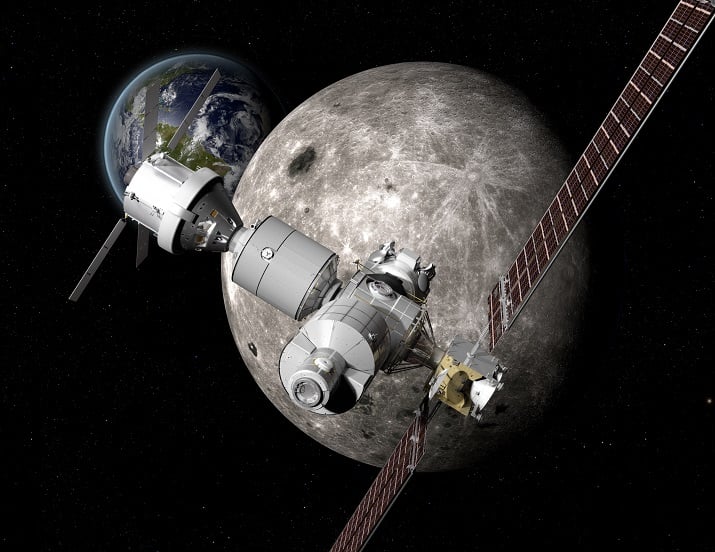 The concept drawing of Boeing’s Deep Space Gateway that would serve as a waypoint between the Moon and Mars missions. Source: Boeing y and transport system would help NASA achieve its goal of having a human space exploration path from the Moon to Mars. The gateway would host a deep space transport vehicle that would take humans to Mars. Once near Mars, crews could deploy via a lander for surface missions or conduct other scientific and robotic missions in orbit.
The habitat itself could also support research and help open opportunities for global government or commercial partnerships in deep space, including lunar missions, Boeing says. It would be powered by a Solar Electric Propulsion (SEP) system.

“The ability to simultaneously launch humans and cargo on SLS would allow us to assemble the gateway in four launches in the early 2020s,” says Pete McGrath, director of global sales and marketing for Boeing’s space exploration division.

Boeing says the transport vehicle that would be equipped with the Deep Space Gateway will be designed to protect passengers from deep space’s harsh environment.

Boeing is developing the gateway and transportation system is being developed partially as part of NASA’s Next Step Technologies for Exploration Technologies (Next Step) program and ongoing High Power SEP technology development effort within the NASA Space Technology Mission Directorate (STMD).