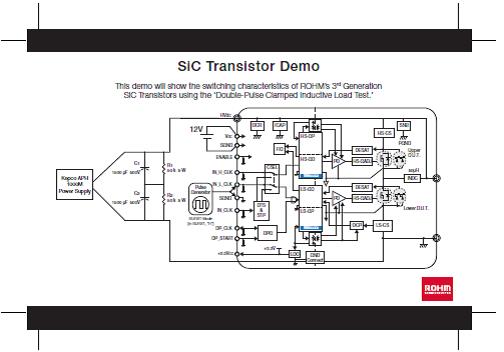 At Rohm’s APEC booth, the company conducted a demonstration showing the switching characteristics of its third generation SiC transistors using the ‘Double-Pulse Clamped Inductive Load Test.' One of the parts that Rohm was showing off was an isolated gate driver, BM60052, which is a gate driver with coreless transformer offering isolation voltage of 2500Vrms from primary to secondary with such features as I/O delay time of 110ns, and a minimum input pulse width of 90ns. Rohm has put a flyback controller in the gate driver to let engineers build their own isolated supply with minimal effort.

The company’s third generation SiC MOSFETs utilize a proprietary trench gate structure that reduces on-resistance by 50 percent and input capacitance by 35 percent compared with its previous planar-type SiC MOSFETs. This translates to significantly lower switching loss and faster switching speeds, improving efficiency while reducing power loss in a variety of equipment. These are 1,200 volts, 30 milliohms on-resistance SiC devices, and here ROHM included not only the silicon carbide MOSFET but a silicon carbide Schottky barrier diode.

In the test, a double-pulse is applied, one long pulse and one short-pulse, and current flow is created in the inductor when the switch is on. Current flow is re-directed to high-side diode when the switch is off. Voltage and current can be measured across the low-side switch. Here, the power supply was set for 800 volts, and the bulk storage is in the caps at the back. A 50 microhenry inductor is wired between source and drain on the upper device, and the double pulse test is on the lower device. When the button is pressed, the current begins at zero and ramps up in the inductor until 60 amps is reached. Then the lower device is shut off and voltage flies back to 800. The current begins circulating in the upper transistor. And when they turn on the lower device again, voltage drops close to zero.

The O-scope display proved that if you had used a traditional fast-recovery diode, that current would be many times the size shown. The test also showed that they can shoot from 0 to 800 volts in about 50 nanoseconds. Which is significantly faster than Rohm’s second generation transistor product. There is a trade-off, too, in that the ability to withstand short-circuit current is not as good as the second generation part. The reason lies in the amount of silicon needed for a given on-resistance that has about been cut in half. In that smaller piece of silicon, the thermal inertia that you've got when you flip a short circuit through it, there is just not as much mass there to take the short for as long.