The hunt for the next great battery to power all the various gadgets and appliances that have entered our daily lives continues with numerous technologies being developed to compete and improve the performance over the ubiquitous lithium-ion battery.

The problem is that many of these solutions have so far not proven to be stable enough to ultimately replace the standard batteries that are of use in multiple markets. Lithium-sulfur batteries are one of these potential suitors to lithium-ion batteries because they are lightweight and abundant with a high-energy capacity, however, the technology currently suffers from a loss of capacity during cycling. 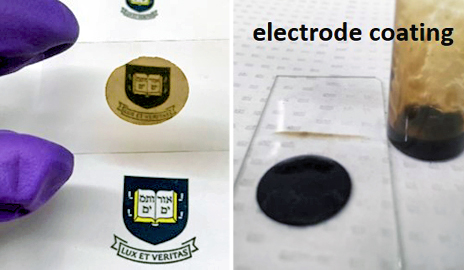 Yale scientists combined the mechanical strength of graphene oxide with the ability of a dendrimer molecule in order to produce a gel-like coating for lithium-sulfur batteries. Source: Yale Scientists at Yale are working on a way to improve lithium-sulfur batteries using an ultra-thin coating material that could extend the life and improve the efficiency.

The gel-like material—a dendrimer-graphene oxide-composite film—can be applied to any sulfur cathode, which is a positive terminal on a battery. Researchers say sulfur cathodes coated with the material can be stably discharged and recharged for more than 1,000 cycles, enhancing the battery’s efficiency and number of cycles.

“Our approach is general in that it can be integrated with virtually any kind of sulfur electrode to increase cycling stability,” says Hailiang Wang, assistant professor of chemistry at Yale. “The developed film is so thin and light it will not affect the overall size or weight of the battery, and thus it will function without compromising the energy and power density of the device.”

The coating was discovered after combining the distinct properties of two material components. The Yale team then merged the mechanical strength of graphene oxide with the ability of a dendrimer molecule to confine lithium polysulfides. The result was a gel-like slurry that can be coated as a 100 nanometer-thin film onto sulfur electrodes.