Nowadays, most solar cells in the market are manufactured from thin wafers of crystalline silicon. This material must be highly purified in a complicated and expensive procedure at temperatures above 1,000 degrees Celsius. In contrast, solar cells can also be produced with a crystal called perovskite—a calcium titanium oxide. The perovskite solar cell consists of layers of tiny crystals of this material; each crystal is 1,000 times thinner than a human hair. The perovskite is inexpensive and it is light-sensitive, the reason we can use it to manufacture solar cells. It can be mixed with a liquid to form an ink-type solution that can be printed on any material using a simple ink jet printer. Once the material is printed with this “solar ink,” it could produce electricity under certain circumstances. 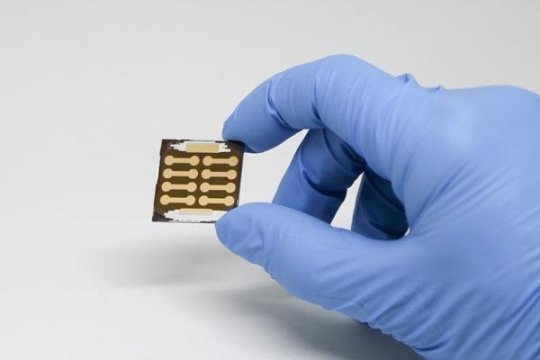 The new perovskite solar cells have achieved an efficiency of 20.1 percent and can be manufactured at low temperatures, which reduces the cost and expands the number of possible applications. Credit: Kevin Soobrian from the University of TorontoTo generate electricity, the perovskite crystals must be able to release electrons out of the crystal, so they can flow through a circuit when excited by solar power. However, the release of electrons only happens in one special layer of the solar cell called the electron selective layer (ESL) and in none other. Manufacturing these types of layers when creating the perovskite cells has been very difficult (excluding mass fabrication of perovskite solar cells) until now.

This week (February 16, 2017), a group of researchers from the University of Toronto, led by Dr. Hairen Tan, developed a new method to overcome this difficulty. “Economies of scale have greatly reduced the cost of silicon manufacturing,” said Professor Ted Sargen, a team member and an expert in emerging solar technologies and the Canada Research Chair in Nanotechnology. “Perovskite solar cells can enable us to use techniques already established in the printing industry to produce solar cells at very low cost. Potentially, perovskites and silicon cells can be married to improve efficiency further, but only with advances in low-temperature processes.”

The research objective of Dr. Tan and his team was to develop a method to fabricate the ESL at a reasonable temperature so it can be used on materials without melting them. “The most effective materials for making ESLs start as a powder and have to be baked at high temperatures, above 500 degrees Celsius,” said Tan. “You can't put that on top of a sheet of flexible plastic or on a fully fabricated silicon cell—it will just melt.”

To overcome this problem, they developed a new chemical reaction to grow ESL made of nanoparticles in a solution directly on top of the cell electrodes, a process that always stays below 150 degrees Celsius, lower than the melting point of most plastics. In this process, the nanoparticles are coated with chlorine atoms to help them bind to the perovskite layer. This binding force allows electrons to be extracted from the crystals without difficulty. The solar cells fabricated with this method—as reported in a paper published in Science magazine—reached 20.1 percent efficiency.

“This is the best ever reported for low-temperature processing techniques. Perovskite solar cells using the older, high-temperature method are only marginally better at 22.1 percent, and even the best silicon solar cells can only reach 26.3 percent,” said Tan.

Professor Alan Aspuru-Guzik, an expert on computational materials science in the Department of Chemistry and Chemical Biology at Harvard University, who was not involved in the work, said: “The Toronto team's computational studies beautifully explain the role of the newly developed electron-selective layer. The work illustrates the rapidly-advancing contribution that computational materials science is making towards rational, next-generation energy devices,” and Professor Luping Yu of the University of Chicago's Department of Chemistry, adds “to augment the best silicon solar cells, next-generation thin-film technologies need to be process-compatible with a finished cell. This entails modest processing temperatures such as those in the Toronto group's advance reported in Science.”

“With our low-temperature process, we could coat our perovskite cells directly on top of silicon without damaging the underlying material,” said Tan. “If a hybrid perovskite-silicon cell can push the efficiency up to 30 percent or higher, it makes solar power a much better economic proposition.”

Tan and his team published the research results in Science and the article can be found here: http://science.sciencemag.org/content/355/6326/722