With smartphones on the market increasingly becoming explosive as a result of battery failures, it’s no wonder why researchers are working diligently to develop next-generation batteries for our devices.

One design, released by the University of Cambridge, is a lithium-sulfur battery inspired by the cells in the human intestines. If the batteries hit the market, they would possess five times the energy density of the lithium-ion batteries that are currently used in smartphones and other electronics.

The new design overcomes one of the key challenges faced when trying to commercialize lithium-sulfur batteries by preventing the degradation of the battery caused by the loss of material within it.

The Cambridge researchers teamed up with the Beijing Institute of Technology to develop and test a lightweight nanostructured material which resembles villi, the finger-like protrusions which line the small intestine. Villi are used to absorb the products of digestion and increase the surface area over which this process can take place. 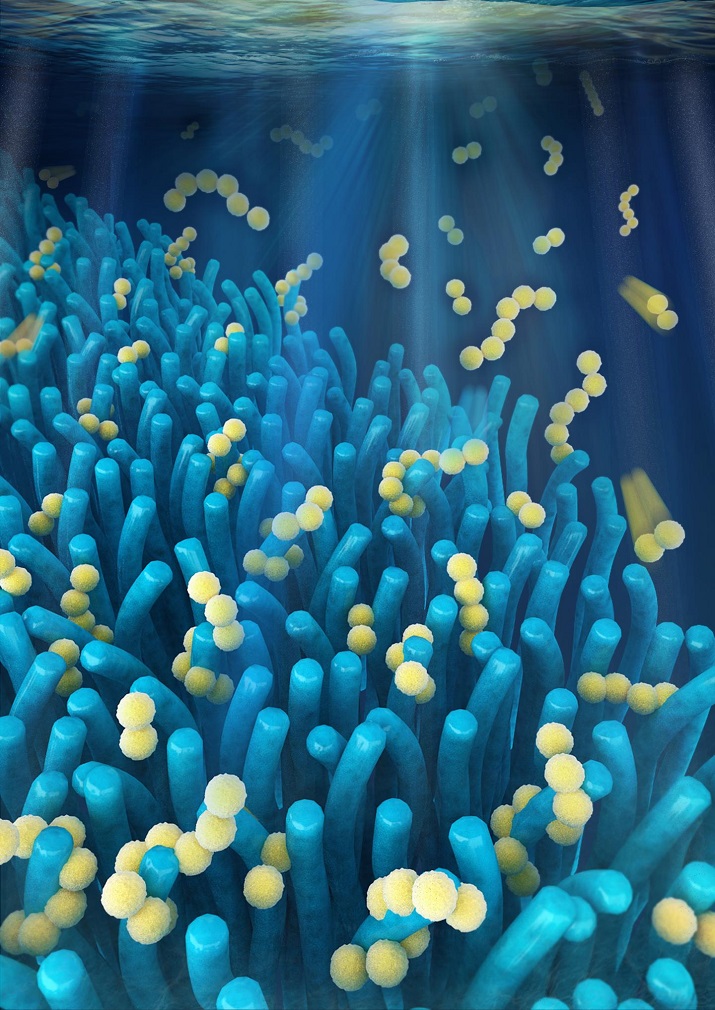 This is a computer visualization of villi-like battery material. (Image Credit: Teng Zhao)

In the new lithium-sulfur battery, a layer of material with a villi-like structure, comprised of tiny zinc oxide wires, is placed on the surface of one of the battery's electrodes in order to trap fragments of the active material when they break off and keep them electrochemically accessible. This allows the material to be reused.

"It's a tiny thing, this layer, but it's important," said Dr. Paul Coxon from Cambridge's Department of Materials Science and Metallurgy. "This gets us a long way through the bottleneck which is preventing the development of better batteries."

A typical lithium-ion battery is made of three separate components: an anode (negative electrode), a cathode (positive electrode) and an electrolyte in the middle. The most common materials for the anode and cathode are graphite and lithium cobalt oxide, which both have layered structures. Positively-charged lithium ions move back and forth from the cathode, through the electrolyte and into the anode.

Sulfur and lithium react differently and elemental sulfur can actually offer a much higher theoretical capacity, resulting in a much higher energy density.

The Cambridge researchers have created a functional layer which lies on top of the cathode and fixes the active material to a conductive framework so the active material can be reused. The layer is made up of tiny, one-dimensional zinc oxide nanowires grown on a scaffold.

The team tested the concept using commercially-available nickel foam for support. After successful results, the foam was replaced by a lightweight carbon fiber mat to reduce the battery's overall weight.

Like the intestinal villi it resembles, this functional layer has a very high surface area. The material has a very strong chemical bond with the poly-sulfides, allowing the active material to be used for longer periods of time, and as a result, greatly increasing the battery’s lifespan.

"This is the first time a chemically functional layer with a well-organized nano-architecture has been proposed to trap and reuse the dissolved active materials during battery charging and discharging," said Teng Zhao, a Ph.D. student from the Department of Materials Science & Metallurgy. "By taking our inspiration from the natural world, we were able to come up with a solution that we hope will accelerate the development of next-generation batteries."

For now, the team has only worked out the concept, so don’t expect any commercially-available lithium-sulfur batteries anytime soon.

More work will still need to be done to get it to go through as many charge cycles as a lithium-ion battery.