Video: Swarm Robots Work Together Without Crashing Into Each Other

Nicolette Emmino
When engineers put together teams, or swarms, of robots, it is sometimes difficult to get them to work in unison—without crashing into one another.

The video above, put together by a team from Georgia Tech roboticists, demonstrates how a minimally invasive safety controller can be added to allow the robots to perform safety and higher-level objectives simultaneously. 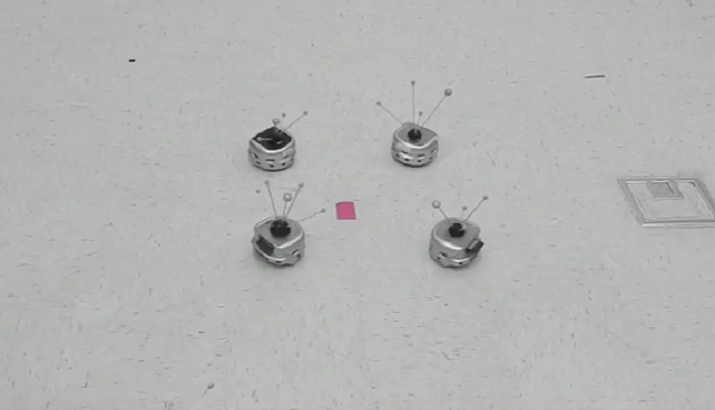 It is often hard to plan swarm behavior with non-intrusive collision avoidance. (Image via Georgia Tech)

To create these robots, roboticists build algorithms that focus on the projected task. They then wrap safety behaviors around those algorithms to keep the machines from running into each other.

Picture each robot in an invisible bubble that other robots must stay away from. As long as nothing touches the bubble, the robots move around without any issues.

The problem lies in the abundance of robots.

“When you have too many robots together, they get so focused on not colliding with each other that they eventually just stop moving,” said Magnus Egerstedt, Georgia Tech roboticist and director of Georgia Tech’s Institute of Robotics and Intelligent Machines. “Their safety behaviors take over and the robots freeze. It’s impossible for them to go anywhere because any movement would cause their bubbles to pop.”

Egerstedt and the team developed a solution for this issue—a new algorithm that allows any number of robots to move within inches of each other, without colliding, to complete their task. So far, the Georgia Tech team is the first to create such minimally invasive safety algorithms.

In layman’s terms, the team shrunk down the size of each robot’s “bubble” to make it as small as possible.

“Our system allows the robots to make the minimum amount of changes to their original behaviors in order to accomplish the task and not smack into each other,” said Egerstedt.

The demonstration, which includes four robots, shows them approach from four different areas, meet in the middle, circle counterclockwise within inches of each other and then fan out into opposite directions. Another one of the team’s demonstrations shows eight robots do the same thing, but they circle clockwise before dispersing. Instead of keeping their distance and taking the long way around their neighbors, the robots move independently—wherever they wish.

While collision-avoidance is not a new technology, and even Google’s self-driving cars are almost crash- free, Egerstedt points out this reality: “We haven’t seen thousands of autonomous cars on the road together yet.”

“Robots are very conservative—they want to make sure they’re safe. You couldn’t pack the interstate with self-driving cars with today’s technology,” he said.

The researchers suggest that an algorithm similar to these demonstrated here could be used for the next generation of air traffic control. So, instead of people directing the flow, planes could be given the authority in airspaces.