Nicolette Emmino
As the robotic revolution continues, researchers have branched out a bit into another now-booming area of the field—soft robotics.

Soft robots have become an area of interest due to the fact that they would make possible tasks and environments previously unachievable by traditional and rigid robotic systems. For example, soft robots could get around in rough terrain or engage in more physical contact with the human body.

Although soft materials have been used on robots for years, it was not until the last five years or so that the field really took off. 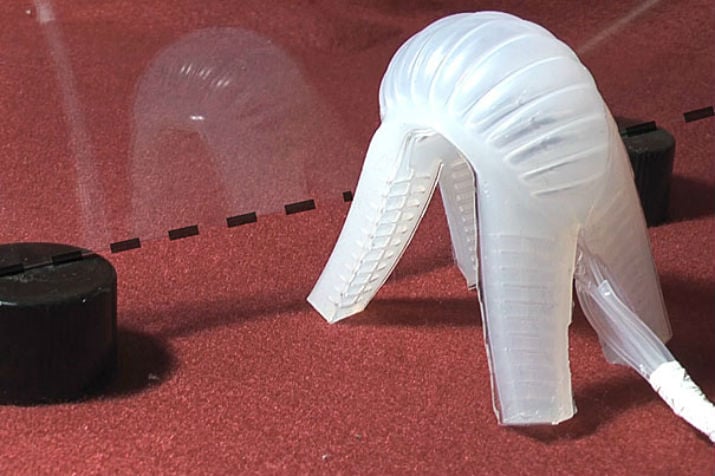 One of the first news-grabbing soft robots from 2011. When the “body” of the robot is inflated, it arches; when the “legs” are inflated, the robot stands up. (Image Credit: George Whitesides/Harvard University)

Over time, researchers have worked to determine which materials work best for new robotic applications, as well as explore new fabrication techniques for this variety of robot.

In the past few months alone, there has been a plethora of advancements made to soft robotics studies.

For example, MIT’s Tangible Media Group revealed its Exoskin—a programmable material that would allow researchers to embed static and rigid materials into elastic membranes and allow them to sense, react and compute. This allows for the introduction of texture changes in future robots.

Researchers from Nagoya University in Japan recently released a journal article entitled “Artificial metamorphosis: Evolutionary design of transforming, soft-bodied robots,” which demonstrated how soft-bodied robots could be adapted to perform two very different tasks, such as moving around underwater and on land.

About two months ago, a collaboration between the BioRobotics Institute in Italy and various U.S. labs resulted in the study and development of swimming soft-bodied robots whose creation was inspired by flexible and soft creatures in nature.

While not all soft robots are inspired by living things, most are, and recently the Wyss Institute for Biologically Inspired Engineering at Harvard University revealed the first-ever fully autonomous soft robot that contained absolutely no rigid electronic parts. This robot, named “Octobot,” was inspired by octopuses, which can perform incredible acts of strength and skill while lacking an internal skeleton. 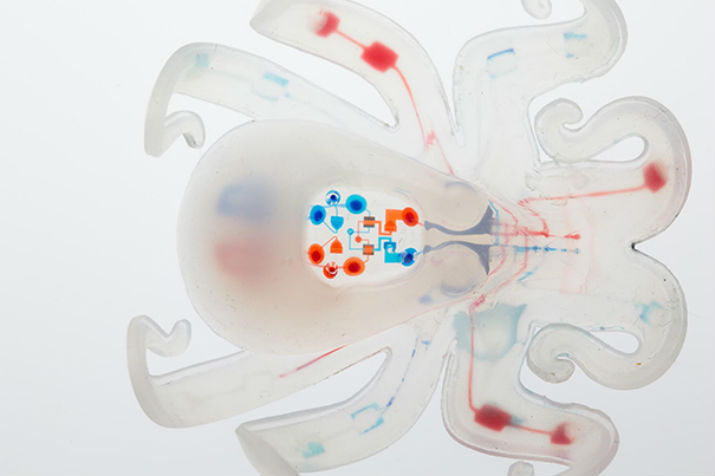 In lieu of rigid electronic parts such as batteries or circuit boards, the "octobot" uses a microfluidic logic circuit powered by hydrogen peroxide converted into gas when in contact with platinum. (image Credit: Lori Sanders)

What is driving the soft robotic industry?

When a slew of advancements come out of one sector of robotics, we must stop and wonder what exactly is propelling the research and discoveries.

One of the most important aspects of soft robotics is finding ideal materials.

"It has to be soft, but it also has to produce enough power to do lots of different things,” said Kwang Kim of the University of Nevada, Las Vegas, who leads a National Science Foundation-funded team that works on soft robotic materials. 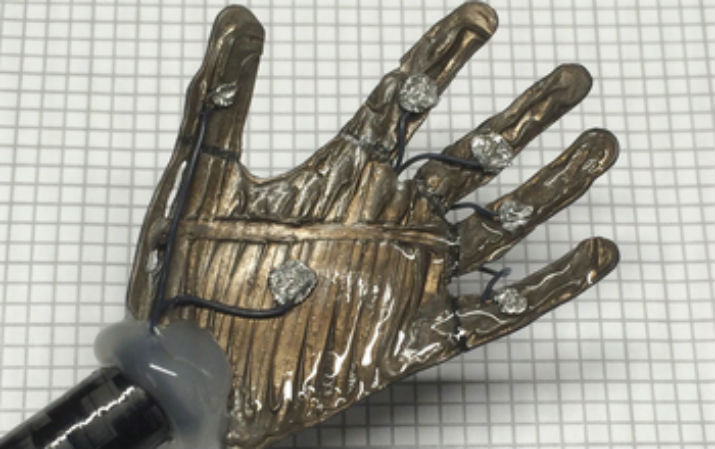 Kim’s team is working with a type of synthetic material called ionic polymer-metal composite, a kind of electroactive polymer in which running electricity through the material makes it change shape.

New materials make it possible to change the way robots are built and what they can do. Earlier this year Stanford researchers revealed a polymer that stretches up to 100 times its original length and even repairs itself if punctured. The super-stretchy, self-healing material could lead to the development of artificial muscles. While artificial muscles currently have applications in robotics, they are not as efficient as real muscles. Small holes or defects in the materials currently used to make artificial muscle can rob them of their resilience, and they are also unable to repair themselves if punctured or scratched.

And because even soft robots need some form of component, Harvard’s Biodesign Lab has been working on soft fluidic actuators that consist of elastomeric matrices with embedded flexible materials like cloth, paper and fiber. These types of components are of interest in the robotics field because they are lightweight, inexpensive and customizable. These actuators can reach combinations of contraction, extension, bending and twisting with simple control inputs such as pressurized fluid, which can find its way into soft robotic creations.

According to the Biodesign lab, the group “can then embed mechanical intelligence into these soft actuators to achieve these performance requirements with simple control inputs.”

A team from Rutgers University has also been trying to determine how to make machines work with less and less rigid components. It came up with a set of elastomeric rotary actuators that were based on pneumatically driven peristaltic motion. The researchers employed silicone-based wheels to demonstrate how the motors enable a new class of soft locomotion that is not currently witnessed in nature. The soft technology can withstand impact, traverse irregular terrain and operate in water. For soft robotics this implies a step closer to providing torque without bending actuators.

And as with any robot, sensors are a vital component. Research groups are working with a variety of sensors for inclusion within soft robots, such as EGaIn sensors, Smart Braids, Stretch Sense and TakkTile sensors.

Many research groups are focusing on furthering the technology because in the future, soft robots will play a role in the medical field, act as personal robots for safe interactions with humans, will assist in disaster situations, and will navigate harsh and challenging terrain. On a smaller scale, strides are being made to implement the softer technology into drug delivery applications.

These future applications will not come without challenges, though. That is why so much focus is placed on new forms of power systems and materials, as well as the inclusion of additive manufacturing methods that could potentially help bring these robots to the mass market.