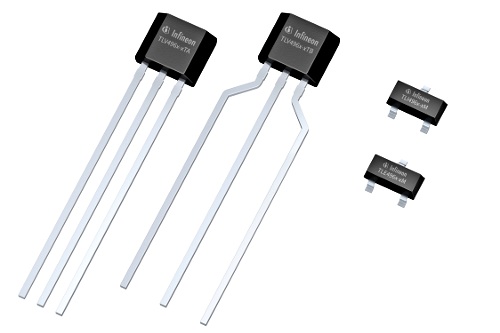 All of the TLx496x Hall sensors—switches and latches—compensate for a variety of process- and temperature-related effects, allowing them to switch precisely over the entire specified temperature range and total lifespan.

Infineon offers the following product details and suitability guidelines for the three newly announced device families within the TLx496x series:

The TLE496x-xM series is suitable for automotive applications with an operating voltage of 3.0 V to 5.5 V, which generally are not exposed to over-current. Target applications include all systems that need a precise Hall switch or Hall latch for an expanded temperature range of –40° C to 170° C. The TLE496x-xM is typically used in power windows and sunroofs, trunk locks, windshield wipers, seatbelts, camshafts, shift levers and the many controls used in BLDC motors. The magnetic behavior and switching points of the TLE4963-1M/2M latches suit them particularly for applications with precise index counting (for pole wheels or rotor position sensing) and for BLDC motors. The Hall switch (TLE4965-5M) is particularly suitable for monitoring switch and lever positions and the detection of open/close states.

The TLI496x-xM series is functionally the same as the TLE496x-xM, but it is specified for a temperature range of –40° C to 125° C and is JESD47- qualified. The TLI496x-xM is typically used in BLDC motors in e-bikes and fans in PCs, in electric drives in building automation (such as blinds and garage doors) as well as the detection of open/close states in white goods and building security and burglar protection.

The TLV496x-xTA/B series was specifically developed for cost-effective, contactless positioning. Typical applications are BLDC motors in white goods (such as dishwashers and washing machines), compressors in air conditioners, and fans in PCs as well as blinds, garden tools and building security and burglar protection (for example, door and window contacts, gates and roller shutters). Despite the pressure to cut costs, these applications need very precise Hall latches or Hall switches (unipolar/bipolar) for temperatures ranging from –40° C to 125° C. The TLV496x-xTA/B versions have a power consumption of 1.6 mA and ESD protection up to 4 kVH (Human Body Model). The output has over-current protection and automatically switches off at high temperatures.