Algorithm Sorts Through Your Computer to Create Vacation Highlight Videos

A new video editing solution has been created by students from the Georgia Institute of Technology. The software automatically sorts and edits untouched footage into a visually appealing highlights vacation reel.

How does it create the perfect vacation video?

The algorithm used in the new approach analyzes video for images with ideal artistic properties. First it considers geolocation, then composition, symmetry and color vibrancy to decide what’s important and what’s not. Video frames with the highest scores are processed into a highlight reel. 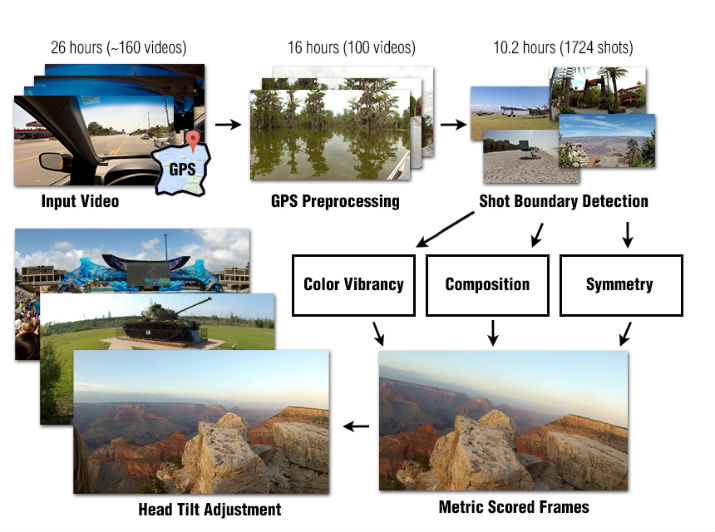 How it works. (Image Credit: Georgia Institute of Technology)

It’s creators, Daniel Castro and Vinay Bettadapura, came up with idea after Bettadapura came back from a two-week vacation across the United States. When the trip was over, he was left with almost 27 hours of footage, recorded with a wearable head-mounted camera that he had no idea what do with it.

“The data was essentially useless because there was just too much of it,” said Bettadapura, who completed his Ph.D. in the fall and now is a Google software engineer. “We liked the idea of being able to automatically generate photo albums from your vacation, algorithmically.”

The algorithm turned all of those hours of video into a 38-second highlight reel in just three hours’ time. It was also helpful that the wearable camera he used captured GPS data, so that the algorithm could filter by geographical location. That reduced the footage to 16 hours. Shot boundary detection further reduced it into 10.2 hours of video. The software then processed for artistic quality and provided an output of the most visually appealing content.

Although Bettadapura’s video took only three hours, time is variable and depends on the number of computers used. The algorithm can be adapted to user preferences. “We can tweak the weights in our algorithm based on the user's aesthetic preferences,” Bettadapura said. “By incorporating facial recognition, we can further adapt the system to generate highlights that include people the user cares about.”

Castro and Bettadapura will continue to work testing the algorithm with multiple participants in order to generalize the approach, incorporate facial recognition, and develop data visualization techniques that make it easy to browse and search specific moments.

“This research brings together multiple modalities to more efficiently understand large amounts of data,” said Castro, who is completing his Ph.D. in computer science and also working as an intern at Google. “We are trying to optimize how easy it is to understand all of the data we have in an efficient manner because otherwise it would be impossible to do so.”