It was first coined in 2011 in Germany, describing the computerization of manufacturing. Dubbed Industry 4.0, said to be the world’s fourth industrial revolution, it is based on smart technology, the gathering and analysis of real-time and sometimes big data, cloud computing and embedded Internet of Things (IoT) technology. The results are the enabling of machinery, storage and production systems that perform complex tasks, share information, deliver instructions to each other without human intervention and advanced sensors that can rapidly detect data and communicate with IT systems. The benefits of the concept are dramatically increased productivity and falling manufacturing costs. 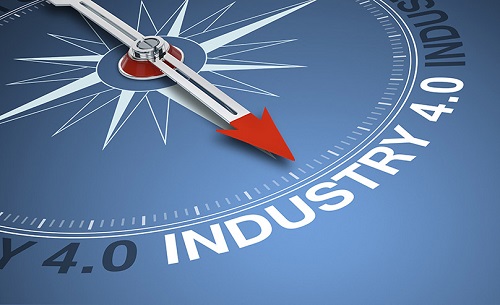 Just a few years ago, the latest industrial revolution, dubbed Industry 4.0 made its debut. Now, it is gaining momentum worldwide as technologies converge rapidly to change manufacturing forever.At its inception in Germany, research, corporations and academia where behind Industry 4.0 and impressive funding by all parties indicated that the concept would not be a fad. It was claimed that data analytics advances meant that powerful software could effectively and efficiently analyze big data, allowing companies ultimately to be responsive to business trends, and armed in their ability to more accurately predict.

Such companies as Siemens and Bosh are squarely behind the Industry 4.0 movement, as well as General Electric with its push of a similar concept - the Industrial Internet of Things (IIOT). However, there are also a myriad of others investing in the movement, all bent on instilling technologies and projects that transform facilities, sensor technology and industrial networking into a smart robotic and robotics/human environment.

By 2014 it was acknowledged that the transition to 4.0 would not happen immediately, but that signs were already visible in sensing, embedded software, and big data analytics. One major hang up is security. 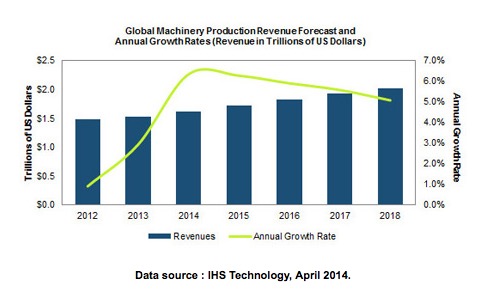 The industrial machinery market—including robots used in manufacturing—doubled in 2014, and is forecast to reach $2 trillion globally by 2018.

While Industry 4.0 and the data it was forecast to deal with was a big idea in 2011, it’s an astronomical one now. Fueled by multiple fundamental technology advances and mushrooming results of those advances, the areas that impact the rapid growth of Industry 4.0 include:

Analytics, for example, not only cuts through the sheer volume of data that sensors provide, it also includes systems that can analyze data across multiple machines to predict failures, self configure, and adapt to changes on the fly.

Industrial robots have been around for a few decades now, tackling complex and/or dangerous assignments. With Industry 4.0, however, they are optimized and integrated like never before. Autonomous robots that are a part of the landscape today are beginning to interact with each other, as well as with human counterparts, and are learning on the job. They feature high-end sensors and controls that enable collaboration, yet their price tags are low.

3D product simulation will increasingly be used in the factory. By simulating a virtual model involving products, machines and humans, machines can be optimized and tested before they go live. Setup times plummet and quality gains are seen.

Integration—both vertical and horizontal, are at the heart of Industry 4.0. Departments, functions, IT systems and engineering will be completely integrated so that data flows to where its value can be used and a totally automated value chain results.

Within the cloud, data will be analyzed and then shared across the enterprise, dramatically shortening reaction times. Process monitoring and control will also move to the cloud in time.

Additive manufacturing will enable manufacturers to design and create a limited number of products that are readily customizable for the end user and cost effective and efficient for the manufacturer. With Industry 4.0, using additive manufacturing methods such as 3-D printing to create these small batches, along with systems that reduce transport distances and the need for inventory, will increase speed while saving time and money.

Mobile technologies will gain even greater traction with the use of augmented reality systems that perform such services as part selection, delivering repair instructions and offering real-time help in decision making and work processes. An example can be augmented reality glasses used in active factory-floor part replacement.

A particular advantage with Industry 4.0 is the strength of the ecosystem, whereby platforms are created for information, service and product exchange. Internal and external ecosystems provide for a decentralized network of production sites and greater integration of disparate parts and technologies that are automatically upgraded and available.

Two considerations in particular are holding back even faster implementation is the broad range of manufacturing equipment that spans decades of investment by companies. First, while new equipment is based on rapid integration into Industry 4.0, it’s safe to say that a 25 year-old piece of equipment that is still functional will not be replaced just to play in Industry 4.0—and won’t be until there’s a real underlying reason to do so.

Another major consideration is security. Cybersecurity hacks are at an all-time high as are the stakes. It is necessary to protect industrial systems and manufacturing processes from threats. The answer is secure and highly reliable communications networks combined with attack-proof devices. And, since so many devices and machines used in a factory setting are old and lacking inherent security, yet are connected via the Internet of Things with a gazillion other devices…well, you can see the problem. The number of cyber-security companies entering into partnerships or being bought by industrial equipment vendors is dramatically increasing and a testament to the depth of the challenges

4.0’s Impact on the Workforce

There’s a fine line between enhancing the factory and maintaining opportunities for workers. The dawn of a greater degree of intelligent automation moves the manufacturing arena from a highly unskilled to a very skilled workforce. Long-term workforce planning will depend on the availability of IT skills and competences—an element missing today. As Industry 4.0 is implemented, the inadequacies of today’s manufacturing workforce will need to be offset through education—which many not currently be defined and in place.

The displacement of low-skilled workers will to some extent be unavoidable. Between the robots and sophisticated machines that will replace them, to the pressure to develop skills required in smart factories—production line workers in particular will be a casualty of Industry 4.0.

The term Industry 4.0 may have been coined in German, but today it is global based especially on issues of connectivity. Germany introduced Platform Industrie 4.0 and the Dialog platform Industrie 4.0 was close behind. The U.S. launched the Industrial Internet Consortium (IIC) bringing together telecommunication, IT companies, manufacturers, and manufacturing systems suppliers. The Smart Manufacturing Leadership Coalition combines government, manufacturers/producers, suppliers, technology companies and academia to bring Industry 4.0 to fruition in the U.S.

International standards are under development to better define the digital factory and existing standards bodies and emerging consortia are currently stepping up to deliver them.