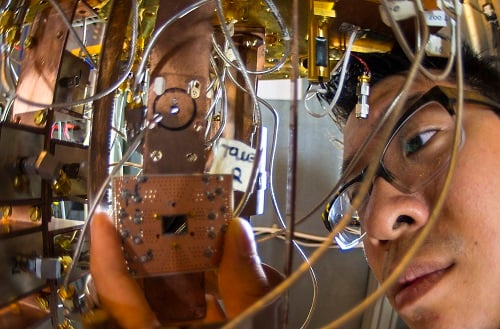 The Logical Qubits (LogiQ) program of IARPA, funding the IBM research, seeks to overcome the limitations of current quantum systems by building a logical qubit from a number of imperfect physical qubits. Under the LogiQ program, IBM’s research team will use superconducting qubits to pursue the leading approach for building a universal quantum computer. Encoding the superconducting qubits into a logical qubit should produce a true quantum computation – laying the foundation for future quantum computing systems.

While many scientists are trying to build qubits, quantum information is fragile and requires special techniques to preserve the quantum state. IBM scientists will have to overcome major challenges like creating high-quality qubits and packaging them together in a scalable form so they can perform complex calculations in a controllable way and limiting the errors that sometimes occur from heat and electromagnetic radiation.

“We are at a turning point where quantum computing is moving beyond theory and experimentation to include engineering and applications,” says Arvind Krishna, senior vice president and director, IBM Research. “Quantum computing promises to deliver exponentially more speed and power not achievable by today’s most powerful computers with the potential to impact business needs on a global scale. Investments and collaboration by government, industry and academia such as this IARPA program are necessary to help overcome some of the challenges towards building a universal quantum computer.”

A universal quantum computer uses quantum mechanics to process large amounts of data and perform computations that are not possible with conventional computers. According to IBM, this progress in computing could one day shorten the discovery time for cancer drugs to a fraction of what it is today, unlock new facets of artificial intelligence, and help keep cloud-computing systems safe from cyber attacks.