Scientists hope to harness this power to solve problems that are difficult for traditional digital computers, like simulating molecules and proteins to create new materials and drugs, or crunching big data sets to supercharge artificial intelligence.

A variety of approaches exist to implement quantum computing, from trapping ions with lasers to confining electrons with semiconductor quantum dots. One tech company, for example, focuses on building quantum processors with superconducting circuits.

A common expectation is that quantum computers are mysterious machines that are locked away in high-tech research labs. For the most part, that is true.

But anyone in the world can try their hand at programming and carrying out experiments on real quantum computers located in IBM’s Quantum Computing Labs. The IBM Q Experience enables public access to these computers over the internet. 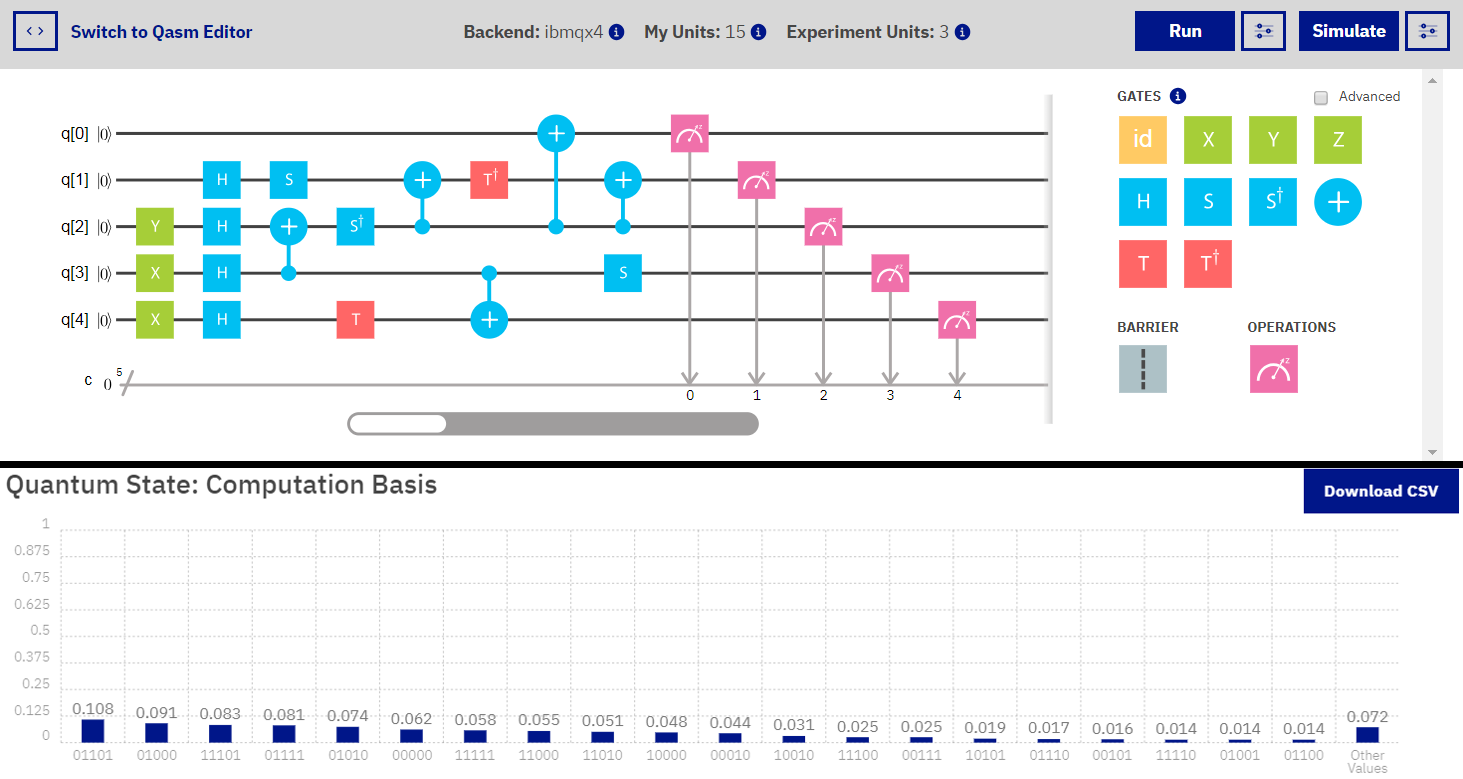 A quantum score composed on IBM’s Quantum Composer as part of the IBM Q Experience. Also shown are the results (as the quantum state computation basis) of the experiment, which was run on IBM’s Q 5 Tenerife quantum computer. Source: IBM. (Click image to enlarge.)

The journey begins by creating a set of instructions that will tell the quantum computer which computations to perform. This is done by designing a quantum algorithm using a web-based graphical user interface called the Quantum Composer.

Much like writing lines of musical notation to compose a song, this tool allows the user to drag and drop symbols on a chart to create what is known as a Quantum Score. The symbols represent quantum logic gates. In essence, the Quantum Score represents a quantum circuit that instructs the quantum computer to perform various operations. It is similar to how logic gates control a traditional digital computer.

Once the Quantum Score is complete, the program is sent to the cloud. There it is queued for processing on one of IBM’s quantum computers. Inside these computers are quantum processors comprised of several quantum bits, or “qubits.” These qubits, analogous to bits from classical computing, execute the quantum algorithm. But to carry out the proper instructions, the qubits must receive control signals in the appropriate format – in this case, microwave pulses.

The operations in the Quantum Score are sent to a stack of microwave electronics. There they are converted into microwave pulses of corresponding frequencies, phases and durations. These pulses are carried over coaxial cables to the quantum processor to manipulate the quantum states of the qubits on the chip to execute the program. 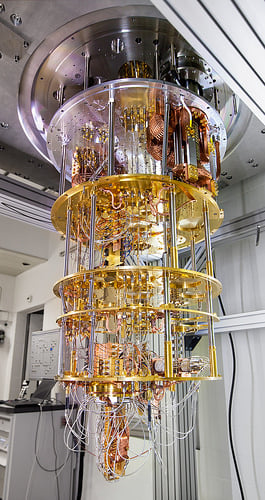 Each descending level of a dilution refrigerator is cooled to a lower temperature. The quantum chip rests at the bottom at a frigid 15 mK above absolute zero. Source: IBM

The processor itself is a tiny chip embedded in a circuit board only a few inches wide which rests at the bottom of a large dilution refrigerator. The chip is mounted within a cryoperm shield (a special magnetic shielding that is most effective at cryogenic temperatures) at the refrigerator's coldest level. This location is kept at temperatures below 15 milliKelvins – just above absolute zero and colder than the vacuum of space.

The dilution refrigerator can achieve such low temperatures by exploiting the endothermic heat of mixing between two isotopes of helium: helium-3 (3He) and helium-4 (4He). This is possible because the 3He-4He mixture experiences a spontaneous phase separation below 870 mK that results in a concentrated phase of nearly 100% 3He and a dilute phase consisting of around 6.6% 3He and 93.4% 4He. When the two phases enter the mixing chamber at the bottom of the refrigerator, a dilution process occurs as 3He travels from the concentrated phase to the dilute phase. Heat is extracted in the process.

This contraption is necessary because the quantum states of the qubits in the processor are extremely delicate. The slightest external disturbance--including heat, vibration and electromagnetic radiation--will destroy the quantum states in a process known as decoherence.

Meanwhile, the microwaves that carry control and measurement signals to the quantum chip are transmitted through coaxial cables. As the pulses – oscillating at frequencies around 4 GHz to 6 GHz – travel through each of the refrigerator’s stages, they pass through attenuators to ensure thermal noise does not reach the processor. 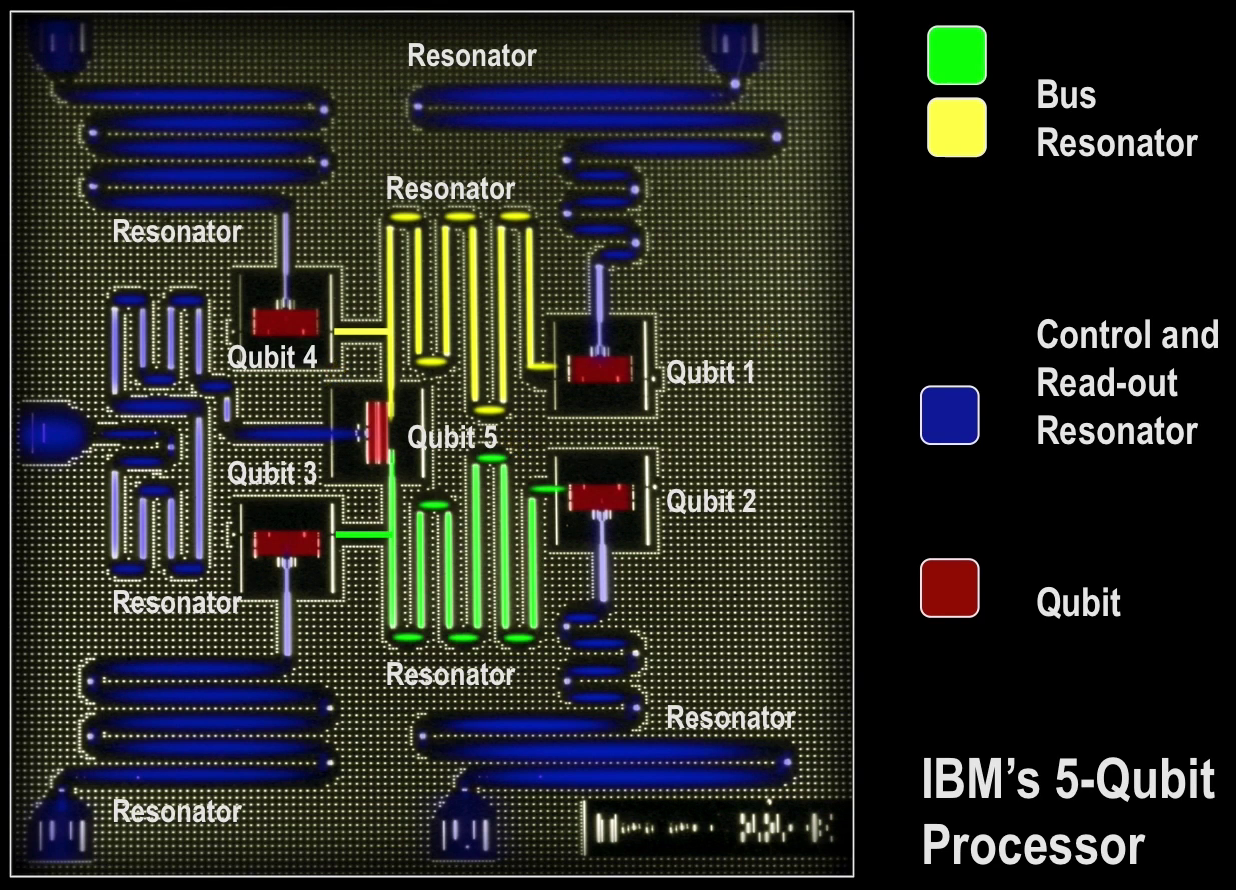 An image of IBM’s five-qubit processor with its main elements highlighted, including the five qubits and their control, read-out and coupling resonators. Source: IBM Research. (Click image to enlarge.)

IBM’s quantum chips consist of a silicon wafer that contains qubits and resonators composed of aluminum and niobium. The qubits are made in a pattern generated with electron-beam lithography. A resonator is connected to each qubit to deliver the control pulses that govern the qubit’s state. The qubits are made by ion etching a sputtered niobium film. Additional resonators link multiple qubits to enable entanglement.

Entanglement is one of the key quantum mechanical phenomena that provides the potential for immense computational acceleration among quantum computers compared to classical computers. Another key is superposition, which allows qubits to exist in multiple states at once. The value of a qubit is expressed as |0⟩ or |1⟩, analogous to a classical bit’s 0 or 1. The difference is that instead of existing as only 0 or 1, qubits can exist in a superposition of the two values. 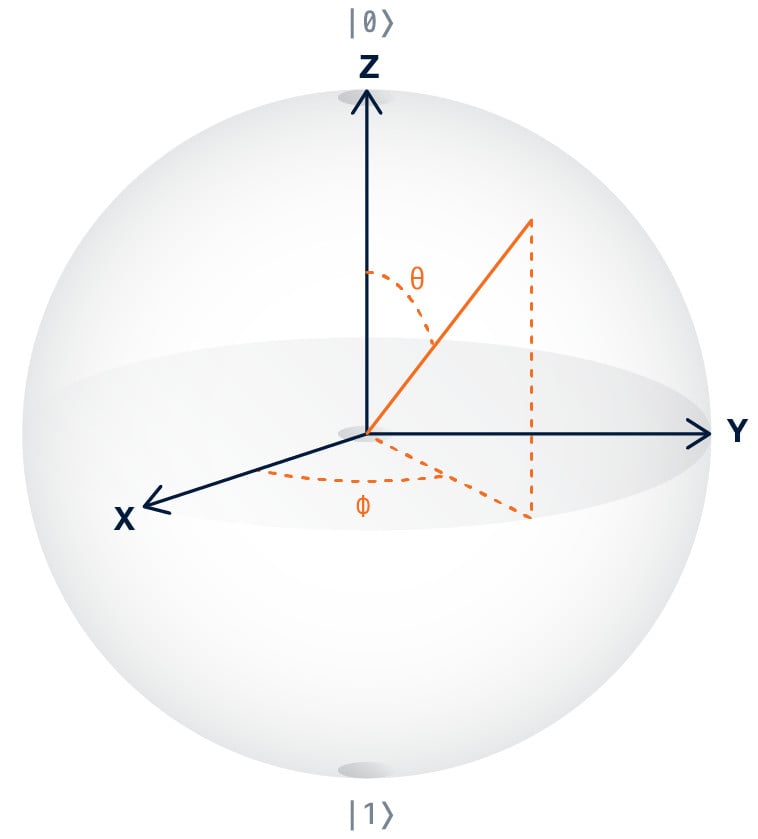 A Bloch sphere can be used to visualize the superpositional state of a qubit, indicated as a vector with a certain angle θ from the z-axis and φ from the x-axis. Measuring the qubit’s state collapses its value to 0 or 1. Source: IBM Research. (Click image to enlarge.)

IBM’s quantum processors use fixed-frequency, superconducting, Josephson-junction-based transmon qubits. A qubit of this type is essentially an LC resonator – a capacitor and an inductor connected in series. The inductor is the Josephson junction – a pair of superconducting electrodes that are separated by a very thin insulator that is a thousandth of a hair thick. The Josephson junction creates the nonlinearity that enables the LC resonator to act like an atom with two quantum energy levels: |0⟩ and |1⟩. Microwave control pulses manipulate the qubit between these two states to carry out quantum operations.

A schematic close-up of IBM’s superconducting qubit, including a zoomed-in view of its Josephson junction. Source: IBM Research. (Click image to enlarge.)

To determine the result of a qubit’s operation, a measurement signal is sent as a microwave pulse to the qubit’s resonator. The measurement destroys the qubit’s superposition and collapses the qubit’s state to 0 or 1. The reflected signal travels back up the dilution refrigerator, passing through isolators that protect the qubits from noise as well as amplifiers that boost the signal’s strength enough to read the qubit’s state accurately. The signal then passes back through the stack of microwave electronics, this time to be converted from microwave frequency to a digital signal that is sent over the internet to the local computer to display the result of the quantum calculation. 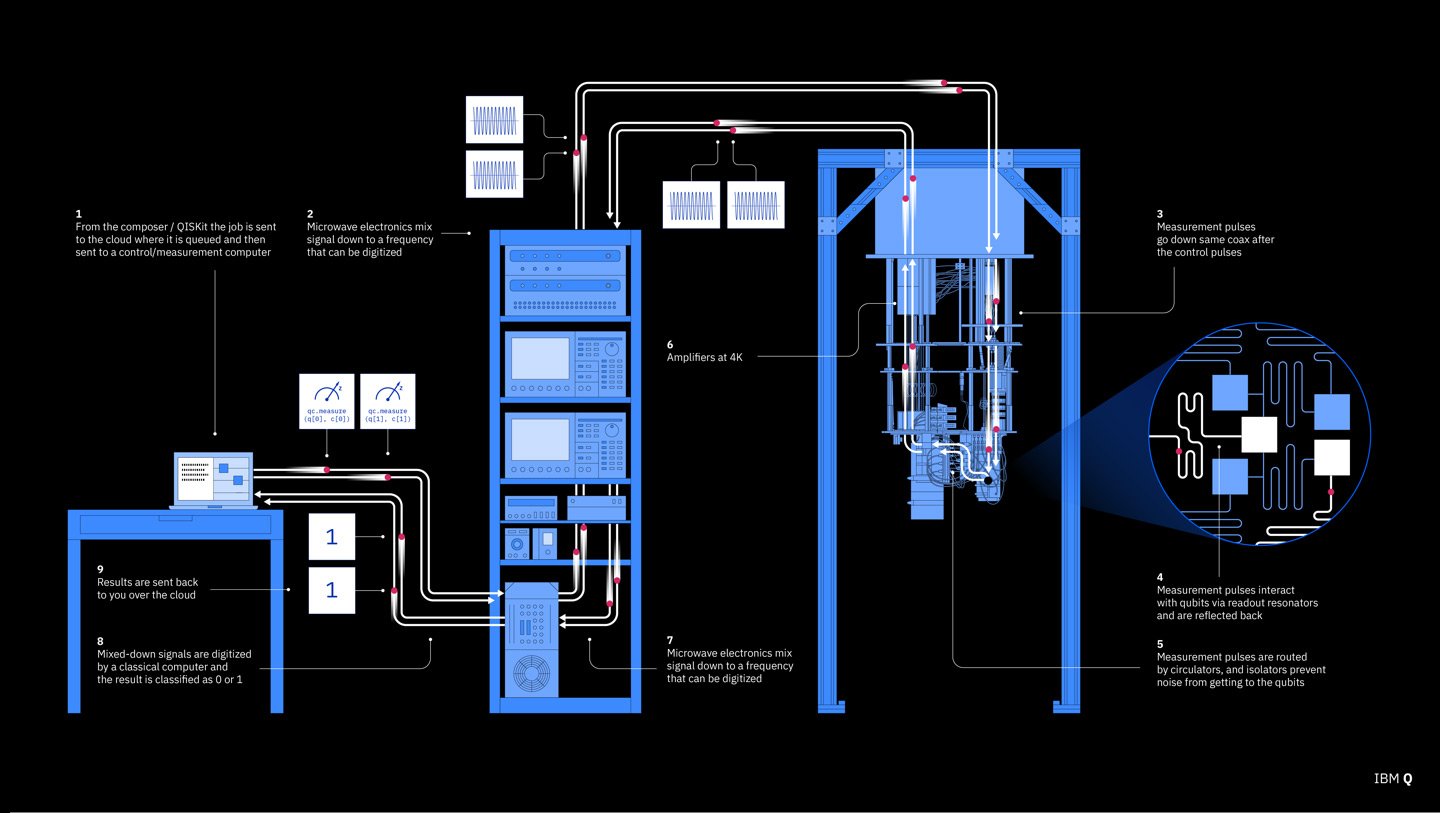 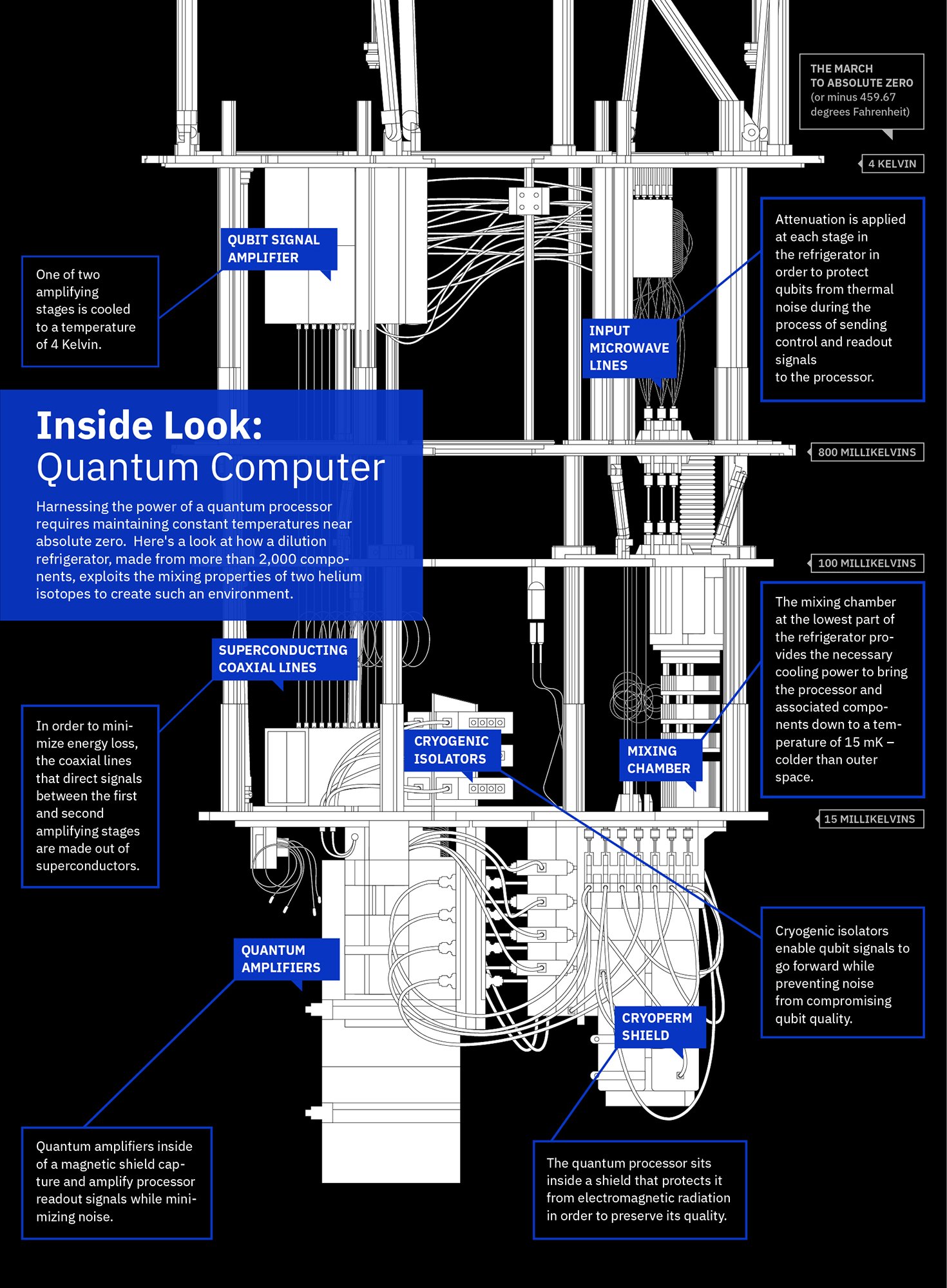 An inside look at IBM’s quantum computer. Source: IBM. (Click image to enlarge.)