Broader market growth in the commercial energy storage market will come in the next few years as a result of falling system costs. As a result, South Korea, Japan and the United States will account for 59% of global installations of energy storage by 2016 although deployment will increase in other regions as well in the next five years, according to a new report from IHS.

This year, for the first time these regions will each record 100 megawatts of annual energy storage installations. Led by declining prices in lithium-ion (li-ion) batteries, system prices have fallen significantly over the last few years. In fact, average li-ion battery prices fell 53% between 2012 and 2015 and by 2019 are forecast to decline by half again, IHS says. 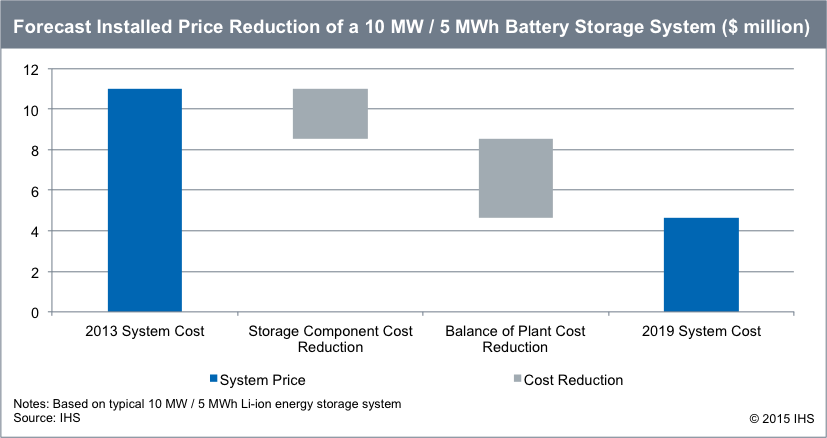 IHS forecasts another drop in lithium-ion battery prices by half by 2019. Source: IHS

Other components in the energy storage market are expected to face increased competition in the coming years as prices are expected to fall quickly. These include storage inverters, power conversion systems (PCS) and more. IHS says in a typical li-ion system, more than 60% of the total reduction in system costs between 2013 and 2019 will come from the balance-of-plant equipment, rather than from batteries alone.

“The breakdown of system costs, and the future evolution of prices, varies significantly depending on whether the system is configured to provide a high-power or high-energy application but battery costs will continue to decline over the next five years,” Wilkinson says.