It is time to take touch-based interfaces to the next level, and a UK startup called Ultrahaptics proposes to do just that by providing multi-point, mid-air, haptic feedback. The company has developed a novel approach using an old technology, promising to overcome the limitations found in current touch-based systems and open the door for a fundamental shift in the way people interact with electronic devices. 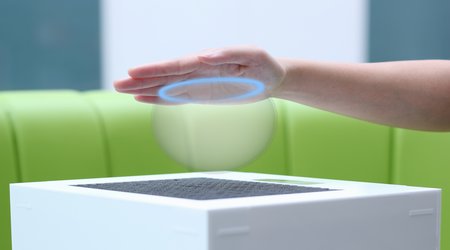 Truly effective tactile feedback has been the key ingredient missing from interactive surfaces. Ultrahaptics’ system fills this void using a 2-D phase array of emitters built on the principle of constructively interfering intersections of ultrasonic waves. Image credit: UltrahapticsAs the application of interactive surfaces has evolved, a number of shortcomings have emerged, making it clear that these interfaces require a new feature set to meet growing consumer expectations. While touchscreen technology enables higher forms of human-device interaction, it falls short in one key area—tactile feedback. Current interactive surfaces require the user to cover the visual content in play by touching the display during tap, pinch and swipe commands, or the system compels users to wear a glove or another attachment to make the technology work. Both approaches offer an experience that users increasingly see as inadequate.

Another stumbling point has emerged with the migration of touch controls into automobiles. As the safety advantages of “eyes-free” interfaces have become clear, carmakers have begun to seek out technologies that will allow drivers to keep their eyes on the road while interacting with sophisticated dashboard controls and infotainment systems. Recent government legislation makes this safety feature a must.

In the medical arena, the incorporation of touch-based interfaces in systems presents its own hurdles. While touchscreens provide a fast and efficient way to interact with healthcare equipment, they also pose hygiene risks arising from the very physical contact that makes the interface so effective. What all these applications require is touch without touch.

Ultrasound Feedback and Its Challenges

To meet this unique demand, developers have turned to 2-D arrays of ultrasound transducers, or emitters, to create haptic feedback systems. The arrays create airwaves that stimulate neuroreceptors in the skin, allowing users to feel sensations on their hands. By modulating the output of the emitters, a system can induce a variety of tactile sensations. However, implementing this approach comes with a fair share of difficulties.

One of the biggest challenges has been to find a way to enable the array to simultaneously create multiple ultrasound focal points (the sites of the haptic sensation). To achieve this goal, the system must focus the right intensity of sound waves in multiple locations. “Focusing on one particular point and then moving that point around is at the simple end of the spectrum,” says Tom Carter, co-founder and CTO of Ultrahaptics. “If you can create and control multiple points at the same time, that’s when you can create more complex feedbacks. But you run into all sorts of problems with physics and attenuation when you start trying to create multiple points.”

Efforts to develop multipoint haptic technology have concentrated on two approaches. One advocates distributing the workload by splitting the transducers in the array into groups, with each group focusing on and creating a separate focal point. The second approach relies on multiplexing, where the emitters rapidly move back and forth between focal points. Unfortunately, this splits the potential energy available to the emitters and reduces the intensity of the sensation created.

A phenomenon called secondary maxima plagues both approaches. These are focal points of weaker ultrasound waves, roughly distributed around the intended focal point, that compromise the overall effectiveness of the system.

“Secondary maxima are additional points of feedback—slightly less strong—around the focal point,” says Carter. “Let’s say that you put a point of haptic feedback right in the center of you palm, but you also feel haptic feedback on your fingertips, thumb and wrist. This gives you false positives—you feel things where you shouldn’t be able to feel things—and it confuses the user.”

Ultrahaptics’ system overcomes the shortcomings that previous attempts’ use on ultrasound have encountered, but not by the strength of its 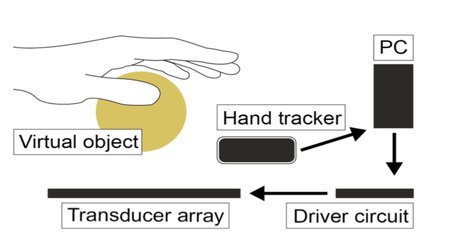 By combining ultrasound transducers and hand-tracking sensors with powerful software, Ultrahaptics' platform delivers multi-point, mid-air, haptic feedback for interactive surfaces. Image credit: Ultrahapticshardware. The fact is the system’s hardware consists almost solely of off-the-shelf components. The company has built its system around a 2-D phase array of ultrasound emitters—the same type of transducer found in automotive automatic parking systems. Operating at 40 KHz, the emitters offer a range of about a meter and produce 120 dB at 30 cm. In its current iteration, the array combines 256 emitters, but the number of transducers will vary according to the demands of the application. Supporting the array, you will find a PC, driver circuit and hand-tracking sensor, such as the Leap Motion sensor.

The secret ingredient that empowers Ultrahaptics’ system lies in the software, which follows a multi-step process by which it creates and focuses the haptic feedback. The software begins by defining a space around the emitter array, within which it models the acoustic field. In this space, it positions “positive control points,” which define the location of the focal points of the haptic feedback and the type and intensity of the sensation to be produced. The software also tells the system where to create the lowest intensity ultrasound emissions. When the system’s motion-tracking sensor indicates that a hand has entered the control zone, the system draws on the information in the control points and instructs the microcontroller to induce the emitters to create a specific type of feedback at a defined location. The algorithm then calculates the phase delay and amplitude of each emitter in the array to create an acoustic field that matches the control points. 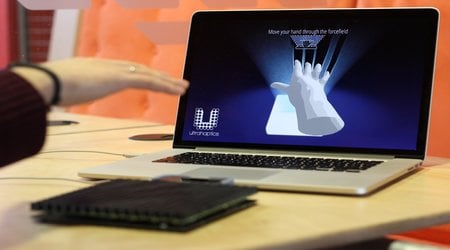 The 2-D array of ultrasound emitters creates airwaves that stimulate neuroreceptors in the skin, allowing users to feel sensations on their hands. Image credit: UltrahapticsThus, the process positions each focal point, maximizes the strength of the ultrasound wave, minimizes the impact of the secondary maxima and optimizes the energy potential of the array to simultaneously create multiple focal points. In so doing, the algorithm creates constructively interfering intersections of ultrasonic waves, where the interference of two or more waves of equal frequency and phase mutually reinforce each other.

Applications with the Right Touch

While still in the early stages of commercialization, Ultrahaptics technology appeals to a number of potential markets, ranging from medical equipment to consumer electronics. However, the advantages it offers really seem to resonate with automakers. As more and more electronic systems make their way to vehicle dashboards, the need for a safer, more effective means of interacting with systems becomes more acute. Some 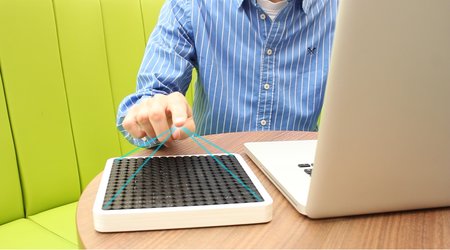 To create haptic feedback in predetermined locations, the 2-D array orchestrates the overlapping of soundwaves from multiple emitters, a principle called constructively interfering intersections of ultrasonic waves, where the interference of two or more waves of equal frequency and phase mutually reinforce each other. Image credit: Ultrahapticsmarket watchers have in fact seen signs that major automotive companies have begun to work with Ultrahaptics.

The prospect of system interfaces floating in mid-air has certainly captured the imagination of designers and consumers alike. One thing is certain: the technology holds the potential to revolutionize how people interact with devices and machines.