Haptics: The Future of Medicine

The electronics world is developing devices and methods to interface a user and a connected device so they can produce "force feedback" (tactile and kinematic) to the user through the sense of touch by applying forces, vibrations and motion. This technology is called “haptics” and its origins can be found in the Greek words haptikos (meaning able to touch) and haptesthai (meaning able to lay hold of). The haptics field is multidisciplinary. It involves engineering, robotics, developmental and experimental psychology, cognitive science, computer science and other disciplines.

Haptics incorporates tactile (touch) and kinesthetic (motion) components to produce interfaces that return force feedback to the user. The feedback relays properties of virtual objects created by a computer. For example, a haptic joystick produces real (force) resistance to the user while playing a video game, even if the computer game does not have any real physical object. Yet, if a user feels the game's virtual objects with any accuracy and fidelity, force feedback is precisely the information he or she receives through the haptic interface. Likewise, when your smart phone vibrates in your pocket, force feedback is letting you know that a phone message is waiting for your response.

Haptics is important in medical simulations to help train surgeons and medical students. Clinicians rely on the sense of touch to connect with patients. Today’s medical technology, however, has evolved new ways for medical personnel to interact with patients, providing opportunities to apply haptics methodology. 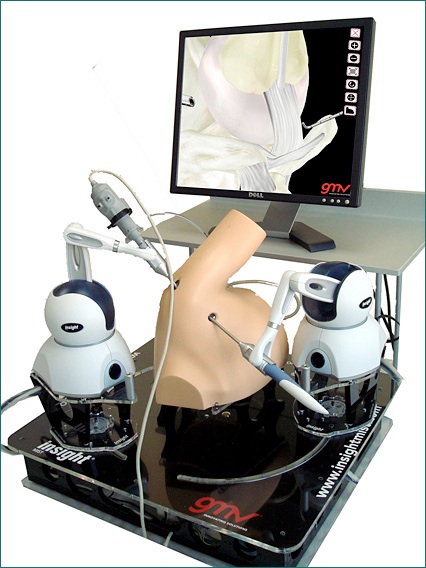 Several areas of applications are described below.

Haptics in the Improvement of Medical Interventions

Avoidance of direct contact between the patients and the practitioner is becoming a trend in medicine. Teleoperators and smart haptics instruments provide the best haptic feedback to the surgeon. Consider the exploding use of robots in surgery that has revolutionized surgery. These robot systems, however, lack the needed haptic feedback. The size of existing multiaxis force sensors seems to be the limiting factor in adding haptics to robots. These sensors can’t be put into robotic instruments, and without these sensors the feedback forces needed by the surgeon are unknown. However, research into this issue is underway. The U.S. National Aeronautics and Space Administration (USASA) is developing of the Robot Assisted Microsurgery System (RAMS) to increase precision in surgical procedures via precise motions. This system, shown here, will provide real haptic feedback to the practitioner. The system is still in the animal testing stage, but it may be used clinically in the future. 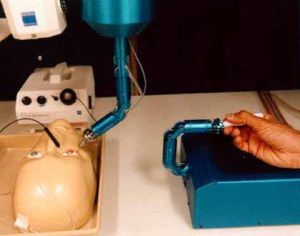 Another example is the Swiss ARAKNES project in development for the European Commission at the Ecole Polytechnique Federale de Lausanne. The system promises to create a set of advanced bio-robots and microsystems inside the patient’s stomach for therapy and surgery.

The research center's webiste says: "The global goal of ARAKNES is to integrate the advantages of traditional open surgery, minimally invasive surgery (MIS), and robotics surgery into a novel operative system for bi-manual, ambulatory, tethered, and visible scarless surgery. We aim at bringing the ARAKNES system close to real industrial manufacturing and full product validation, so as to make it available soon to surgeons for clinical use." 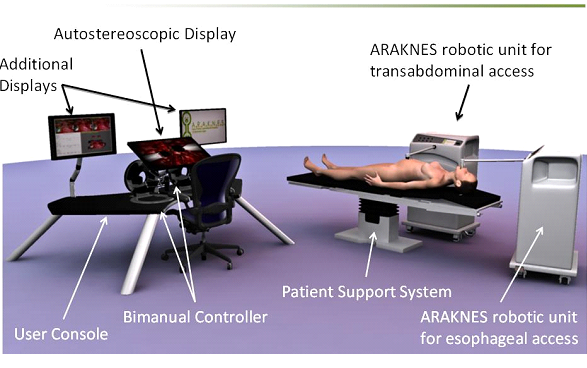 A list of other haptics applications in development and in clinical use today is included below.

Integrating haptics in medicine is still a major challenge. However, advanced technology that includes simulation, software, artificial intelligence, virtual reality and others is in development. In the future these technologies will create the tools for better medical simulation, and haptics technology should have a major role.