The current generation of electronic devices sport a growing number of sophisticated features, but perhaps the most critical is the display. In addition to delivering brilliant imagery, this component provides the visual medium through which information is conveyed and by which humans and devices interact. For some time, liquid-crystal displays (LCDs) have dominated the market, spanning segments ranging from smartphones to large-screen TVs. However, advances in organic light-emitting diode (OLED) technology promise to not only propel OLEDs into the lead position in the market, but also trigger a paradigm shift in how consumers use displays.

“OLED technology is going to dramatically change the display market,” says Hojung Kim, director of Communication Team, Samsung Display Company. “The potential of OLED is limited only by one’s imagination.”

The Devil in the Details

The catalyst for these changes resides in the underlying technologies of the two types of displays. The chief points of contrast fall within the realms of lighting, control and substrate material.

LCD displays use an LED backlight, positioned behind or to the side of the display, to illuminate the pixels and create images. OLED pixels, on the other hand, are emissive—they produce their own light—eliminating the need for a backlight. This distinction offers a number of key advantages.

Without the backlight, the OLED is lighter, thinner and smaller than an LCD, and it gives off much less heat. Combined these factors allow OLEDs to be used in the most svelte electronic device, positioning the technology to play a big role in mobile electronics and the emerging class of wearable devices. 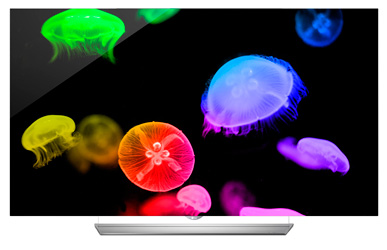 Because of the emissive nature of their pixels, OLEDs can turn off individual pixels, which enable the display to deliver deeper blacks, higher contrast and richer colors. Credit image: LG Electronics.The emissive nature of OLED displays also enables pixel-by-pixel control—something that cannot be done by an LCD—even with advanced dimming technology. This level of control enables OLEDs to turn individual pixels off to create nearly perfect black (no electricity to the pixel means that no light emanates from the screen) and to reduce power consumption. Deeper blacks enable higher contrast, richer colors and picture quality superior to LCDs. In fact, OLEDs deliver a higher rate of color reproduction than LCDs, with almost 100% of Adobe RGB, compared with LCDs’ 70-80%.

However, the advantages of OLED technology go beyond extraordinary visual performance. The substrate, or structural framework, of OLED panels may provide the biggest game-changing element. Unlike the rigid, shatter-prone glass substrates often used in LCDs, OLED display manufacturers are increasingly turning to flexible plastic substrates. With the development of ink-jet printed OLEDs, display producers can now apply light-producing compounds to more malleable surfaces.

While still in the early stages of its development, flexible OLED panels mark a major turning point for product form factors, clearly setting them 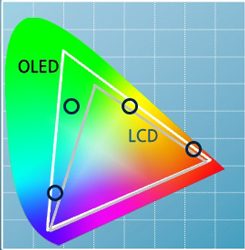 OLEDs offer a greater rate of color reproduction than LCDs, achieving almost 100% of Adobe RGB. Credit image: Samsung.apart from glass equivalents and positioning the technology to dominate the future display market. When further developed, these factors will enable a raft of new applications unencumbered by restrictions on pliability and the shape of the display.

“The whole movement from glass to plastic is still in its infancy in terms of OLED,” says Mike Hack, general manager, OLED Lighting and Displays and vice president of Business Development for Universal Display Corp. “Ultimately, it will enable rollable and foldable devices in the future that will be real game changers from where we are today, and that can’t be made with LCDs. It will revolutionize the display industry over the next few years.”

Taking Pain out of Manufacturing

Despite all these advances, OLED technology still has obstacles to overcome. Cost is the major obstacle. The high cost of OLED panels has been an ongoing problem that has impeded the technology’s growth in the marketplace. Low yields brought about by defects in the substrate have caused production costs to remain high.

“The reason OLED technology still has relatively low volume and its price is so high is because of the manufacturing issues,” says Hack. “Producers are still working out how to get the volume up, but this is part of the natural cycle of any new technology.”

To help improve manufacturing processes, innovators such as Universal Display Corp. (UDC) and LG Display have developed supporting technologies that will bring the cost of the next-generation OLED products down and enhance their performance. One of these developments is a new approach to encapsulating the OLED panels. 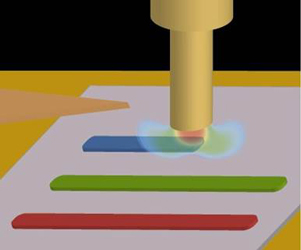 To compliment this approach, UDC and its research partner Princeton University are working to advance organic vapor-jet printing (OVJP). This process combines the high-performance of small molecule materials with the efficiency of ink-jet printing, offering a high-resolution printing capability and high material utilization. While the potential is tremendous, the technique is still a work in progress. The researchers hope that OVJP will ultimately offer higher manufacturing throughput and lower cost than previous manufacturing approaches.

Whether the display serves a large-screen TV, a smartphone, or a wearable device, power consumption plays a key role in the design process. The issue of energy efficiency poses a problem for OLEDs that rely on fluorescent emission. This technology converts only 25% of the excitonic energy used to create light, with the remaining 75% lost as heat. In the late 1990s, Princeton University and the University of Southern California found that the use of soluble phosphorescent small-molecule materials improved the energy-to-light conversion efficiency to nearly 100%. 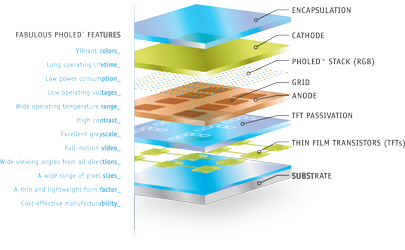 With Universal Display's phosphorescent OLED technology, OLEDs achieve nearly 100% efficiency in converting energy to light. This means that the displays are well suited for applications involving battery-operated devices. Here is a look at the components making up the display. Credit image: Universal Display.the heat reduction extends the life of the PHOLED and reduces the amount of air conditioning required to keep the display cool.

PHOLED technology also plays well with a variety of manufacturing processes, including vacuum thermal evaporation, OVPD, laser-induced thermal imaging, and ink-jet printing. This alleviates some of the obstacles standing in the way of high-volume production.

Dealing with the Blues

While OLEDs provide rich colors across the full color spectrum, the technology has suffered because the OLED material used to produce blue light degrades more rapidly than the materials that produce the other colors. This upsets the color balance and reduces the brightness of the display, prompting some display makers to counteract the deficiency by increasing the size of the blue sub-pixel.

To address this shortcoming and enhance color management, leaders in the OLED field, have turned to white-OLED display (WRGB) technology, which adds a white sub-pixel to the mix. An example of this can be seen in LG’s OLED TV, where every pixel has a fourth clear sub-pixel, which produces pure White. Other sub-pixels can produce white, but white sub-pixels improve color management, allowing the display to adjust the color gamut more easily, especially the color-tracking accuracy. WRGB technology also significantly improves the display’s power efficiency because it does not have to power the red, green and blue sub-pixels to achieve the same result.

In addition to improving performance, this approach offers benefits in the manufacturing arena. WRGB has proven to be much more scalable and it simplifies OLED production, improves yields and reduces manufacturing costs.

“Blue-light degradation was never an issue for LG because we use WRGB, which essentially has the organic layer producing white light,” says Tim Alessi, director of New Product Development, LG Electronics. “They all essentially age at about the same rate.”

A New Perspective on Displays 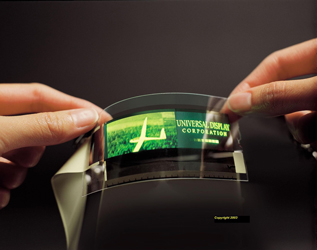 The shift from ridged OLED glass substrates to thin, flexible plastic units promises to deliver flexibility that will enable applications such as daily-refreshable newspapers, wall-size television monitors, walls, windows and partitions that double as computer screens. Credit image: Universal Display.New technologies have begun to sweep aside many of the physical constrains limiting the form factors and operations OLEDs can perform, and in the process they are redefining the next generation of electronic devices.

“OLEDs have transitioned to plastic and that will enable whole new uses, applications, and products,” says Hack. “When the first rollable or foldable display comes out, people can begin to have cell phones where the display folds or rolls or use little TVs that you can roll out. That will change the game in terms of what you can do with displays, how you can use them, and where you can put them.”