150 Million Smart Meter Semiconductors to be Shipped by 2019

The global market for semiconductors used in smart meters is expected to rise in the next few years as demand for precise energy measurement and communications increases from utility vendors, according to a new report from IHS.

Shipments of communicating meters used for two-way communications between smart meters and utilities are forecast to rise to 150 million units by 2019, up from 132 million units in 2015, IHS says. Meanwhile, global revenues for semiconductors used in water, gas and electric meters reached $1.2 billion in 2014 and has a five-year compound annual growth rate (CAGR) of 8%. The average semiconductor cost in two-way meters was approximately $11 in 2014, but IHS sees this average selling price (ASP) increasing in the next few years for 32-bit microcontrollers, memory chips, single system-on-chips (SoCs) and other components used in energy meters. 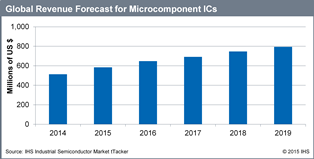 Revenues for microcomponent ICs are expected to increase steadily through 2019 in smart meters. Source: IHS. The increase in pricing is the result of the rise in demand for precise energy measurement and communication chips that is increasing the penetration of micro-component ICs along with analog semiconductors. IHS says two-thirds of meter semiconductor revenues comes from microcontrollers and analog components.

IHS says meters installed in the latter half of the decade will require a greater application complexity, better security, improved communication ability, enhanced remote control ability and higher resolution. What this means is increased memory and SoC solutions with greater capabilities in a smaller package than in the past.