The demand for two-way smart water meters is set for impressive growth over the next five years rising to more than $1 billion in revenue, according to a new report from IHS Technology, owner of Electronics 360.

Two-way smart meters are the fasting growing segment of the global water meter industry and the growth is coming from managed services, analytics and smart water network adoption, IHS said. Two-way smart water meter revenue will nearly double by 2019, rising to $1.1 billion, up from $575 million at the end of 2013, as shown in Figure 1. By 2020, IHS forecasts smart devices will make up 20 percent of total revenue for water meters, up from 18 percent in 2013. 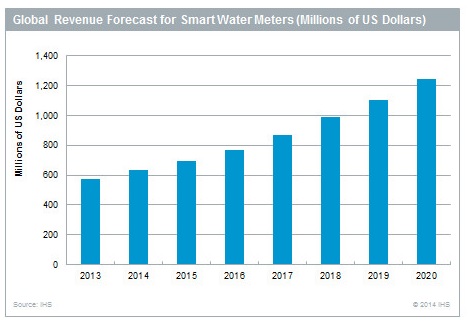 The benefit of smart meters is that because they are digital, there is no human error element in the readings. This leads to great accuracy than traditional basic meters or one-way devices. Two-way smart meters also can engage in two-way communications with electric utilities when used in a home or business.

“The benefits of installing smart water meters are growing, and installing this new technology is also becoming easier for utilities that previously haven’t been able to invest in smart meters,” said Michael Markides, associate director for smart utilities infrastructure at IHS, said in a statement. “Utilities that have the capability to purchase smart water meters now are considering implementing smart water networks. These networks will deliver a whole host of new functionality that can be achieved thanks to integrating modern information technology into their daily operations.”

The leading adopter of two-way meters is North America which utilizes the devices in advanced metering infrastructure (AMI) networks. However, stronger growth is occurring in Europe as France is quickly expanding. Following France, the U.K., Ireland and Germany are all experiencing a rapid transition to the adoption of two-way smart water meters.

According to IHS, smart water networks are becoming a common theme from water technology vendors. Utility companies are able to get a real-time view of their water distribution networks by blending the value of the AMI data with other electronics, hardware and software. And while automating the meter-ready process is still the main driver for installing an AMI, other applications can be improved with the use of AMI data, IHS said. These include leak detection, customer service, hydraulic monitoring and pressure testing, as well as many tasks that a water utility must undertake.

“This is really where managed services come into play,” Markides noted. “Increasingly, utilities will be able to invest in modern technology where they couldn’t previously, as vendors lessen capital spending requirements and radically improve return on investment by hosting many of the utility operations on their own. In turn, this allows for maximum value to be realized from new hardware electronics, software and analytics.”

Smartphones Seen as Most Disruptive Trend in Automotive Infotainment

Why Electrolux Buying GE Appliances is a Great Strategic Fit