Japan’s Toshiba Corp. has developed a process that uses solar power to generate carbon compounds from carbon dioxide and water. The carbon compounds can deliver chemical feedstock or fuel for use in industry and Toshiba reckons the technology could be deployed within the next five to ten years.

The process is a replica of organic photosynthesis but does not depend on organic materials, such as algae, instead uses a gold catalyst with a nanoscale structure laid down above a semiconductor multijunction device.

Such artificial photosynthesis processes are attracting attention because they could be doubly beneficial in that they could consume atmospheric carbon dioxide – which is considered to be cause of global warming – and serve as an alternative source of energy displacing the consumption of fossil fuels. Although the availability of clean water is seen as potential problem for the global population, nonetheless artificial photosynthesis technologies that use solar energy to generate carbon compounds from carbon dioxide and water are seen as promising. 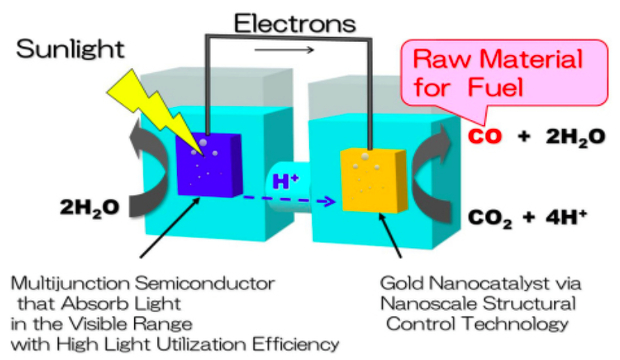 Like a solar cell but the silicon multijunction helps break carbon dioxide down to carbon monoxide which can be building block for fuel compounds. Source: Toshiba.

Toshiba is not the first company to pursue synthetic production of so-called biofuels. Algenol Biofuels Inc. (Fort Myers, Florida) is an industrial biotechnology company founded in 2006 to commercialize an algae-based method for production of ethanol and other biofuels from proprietary algae, sunlight, carbon dioxide and saltwater. Algenol is preparing for first commercial production in 2015.

Toshiba argues that other artificial photosynthesis technologies, such as those relying on biological converters, tend to absorb ultraviolet light to reach the high reaction energy required to convert carbon dioxide into a fuel and this drags down the energy conversion efficiency.

Toshiba’s technology uses a gold catalyst with a nanometer-scale structure applied to a multijunction semiconductor that absorbs light in the visible range to convert carbon dioxide and water into carbon monoxide, a source for the production of methanol, which can be used as a substitute for gasoline and as a feedstock in the manufacture of plastic products.

Toshiba's research has focused on the manufacturing requirements for the nanometer-scale gold catalyst to maximize the number of active sites and the development of an efficient electrolyte.

Toshiba plans to further improve the conversion efficiency by increasing the catalytic activity with a long-term goal of develop a technology that can be installed at the outputs of power stations and factories.