Global revenues for photovoltaic (PV) microinverters and power optimizers are set for substantial growth in the next five years expanding by more than three-fold, according to a new report from IHS Technology.

Worldwide revenue for these two devices, collectively called module-level power electronics (MLPE) will grow to $1.1 billion by 2018, up from $329 million in 2013, as shown in Figure 1. During this forecast period, MLPE devices will rise at a compound annual growth rate (CAGR) of 27 percent. 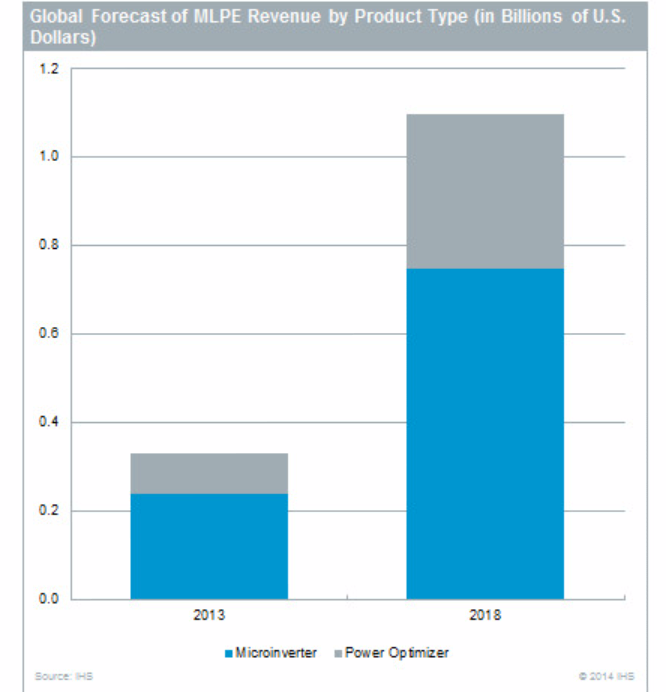 Cormac Gilligan, senior analyst for solar inverters at IHS, said the demand for MLPE is coming from regions in the U.S., the U.K. and Australia and continues to grow despite intense price pressure from new entrants into the business that are decreasing PV system prices.

“Future demand for microinverters and power optimizers is expected to be spurred by continued acceptance in mature European PV markets, such as Germany and France,” Gilligan said. “However, some of the major Asian markets, like Japan and China, will generate huge opportunity in the next few years as MLPE technology begins to penetrate these markets in larger volumes.”

The United States is the leader in microinverter shipments, with residential systems representing the largest market for microinverters in the region. Among suppliers, Emphases has built a leadership position in microinverters, although the penetration rate is beginning to saturate, IHS believes.

But because commercial installations in the U.S. are increasing for microinverters, the U.S. will continue to maintain the position as the largest market for microinverters through 2018. The U.S. is also one of the fastest-growing markets for power optimizers with shipments forecasted to increase by 160 percent in 2014with the leading suppliers being SolarEdge, Tigo and Ampt.

In Japan, power inverters have been shipped in low numbers to date but IHS forecasts the penetration rate in Japan will increase dramatically to 7 percent of total installations in 2018 because increased energy yields that result from using MLPE will allow a higher return on investment (ROI).

IHS has seen a number of new vendors enter the microinverter and power optimizer market even with entrenched competitors dominating. For example, inverter suppliers, such as Kaco and Delta, have released new microinverter models as they try to diversify their inverter portfolio.

IHS said these new entrants will put pressure on existing players to innovate to develop next-generation models and new sales channels. Luckily, even with new suppliers entering the market, the growth forecasted for MLPE devices will open up a wealth of opportunities for new and existing suppliers to grow their business and even draw in more competitors to the space.

Why Electrolux Buying GE Appliances is a Great Strategic Fit

U.S.,China Hold Close to Half of the World's Planned Solar Projects