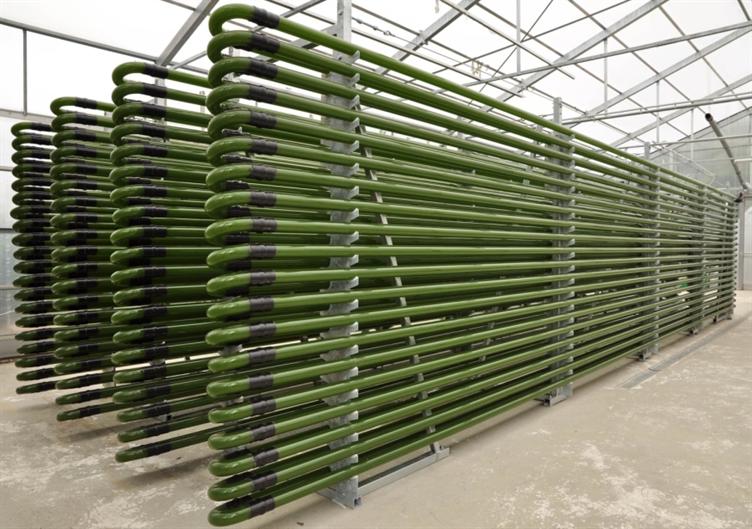 A photobioreactor for the mass cultivation of algae. Source: IGV Biotech/CC BY-SA 3.0

Today, there are finite sources to cope with ever-increasing power needs. The availability of such resources, such as crude oil, is not only limited, but generally not economical and harmful to the environment. However, one solution to these limited resources is algae fuel, which is providing solutions for viable green power production.

Yet, despite its green credentials and its ability to outperform traditional bio-fuels including corn and soybeans, algae has faced many hurdles in widespread adoption due to the large amounts of water that algae demands.

Algae fuel, algae oil or algal biofuel can be defined as alternatives to liquid fossil fuels. Algae is used as a source of energy-rich oils. In addition to being a substitute for certain sources of biofuels including corn and sugar cane, it can also be used as a replacement for seaweed fuel or seaweed oil.

As the world's population increases at a rapid pace, energy demands are also increasing. However, conventional energy sources, considered drivers of climate change, are no longer considered a viable option and renewable alternatives to fossil fuels are being urgently investigated. Yet, these new renewable energy sources must not produce extensive amounts of greenhouse gases.

Emerging as a possible solution is algae with its photosynthetic properties. Behaving as solar cells, the algae converts light into electric energy that is used for the production of electricity.

During the process of photosynthesis, electrons are produced by the algae. Some of the produced electrons are transferred outside the cell of algae where they can provide electric energy to power different devices.

During testing, all the bio-photovoltaics (BPVs) derived from algae harvested light, produced electrons and transferred the power to an electric circuit in a single compartment. Additionally, electrons produced current immediately after they had been secreted.

The fuel cells that have been powered by the algae are unlikely to produce electricity enough to power a grid system. So, these fuel cells are useful in applications where there is no existing electric grid but where there is an abundance of sunlight, for instance, in rural Africa. Moreover, many researchers suggest that BPVs could be produced by local communities directly as compared to the synthetic photovoltaics based on semiconductors. Their production could only be carried out in dedicated facilities far away from where they are used.

Despite the fact that algal fuel is renewable as well as environmentally friendly, it demands vast amounts of water. However, researchers reveal that the water demand can be addressed if algae is grown in sunny and humid climates such as the Gulf Coast and the southeastern seaboard, which have favorable climate conditions. Using such regions could potentially help to reduce the amount of water required for the creation of algal biofuel.