The DLP9000 has more than four times higher resolution and pattern rates that are twice those of the previous best device, the DLP4500. The second chip being introduced is the DLP6500 with twice as many pixels and twice the pattern rate, TI said. 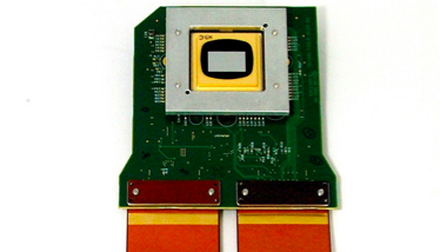 TI invented the micromirror, or digital light processing (DLP) back in the early 1990s and originally deployed them in office projectors and eventually in cinema projectors. The principle of the digital micromirror is that an array of thousands of electrostatically-operated tilting mirrors of micron dimensions can be addressed like an SRAM and updated hundreds of times a second. When the mirror is in one orientation a pixel is illuminated and when in another the light is diverted away from the projection aperture. The high refresh rate can be used to achieve grey-scale and tri-color pixels.

Since those early deployments the DLP devices have been proposed for small-scale picoprojectors and for scanning 3D objects.

The DLP9000's micromirrors are on a 7.6-micron pitch and the micromirror array has a diagonal size of 0.9 inches. The DLP6500's micromirrors are on the same pitch but the array size is 0.65-inches. Each array IC can be supported by the DLPC900 controller IC, which offers 128Mbytes of embedded DRAM for storage of up to 400 1-bit patterns. Input and output triggers are suitable for synchronization with a variety of cameras, sensors or other peripherals.

The two devices support programmable pattern rates up to 9,500Hz for fast 3D measurements and mirror materials have been optimized for optical wavelengths of 400nm to 700nm compatible with resins for 3D printing and some resists for lithography applications such as in PCB manufacturing and display panel lithography.

First Half of 2014 Closes Strong for Manufacturing