The Micron M600 SATA SSD features the Boise, ID-based company’s flash technology but draws less than 2 mW of power enabling a longer battery life in mobile computing platforms while still performing at 100,000 input/output operations per second and 560 MB/s sequential read speeds. Micron said that typical hard drives in laptops require exponentially more power when idle and ten times as much power while it spins its platters to access data compared to this SSD.

IHS Technology forecasts that the SSD market for Ultrathins will grow to 110.6 million units by 2018, up from 24.1 million units in 2013, as shown in Figure 1. The market will see strong growth in the coming years growing to 47.5 million units this year and jumping to 74.8 million units next year. While 2016 and 2017 will slow slightly, growth is continued to be strong throughout the forecast period. 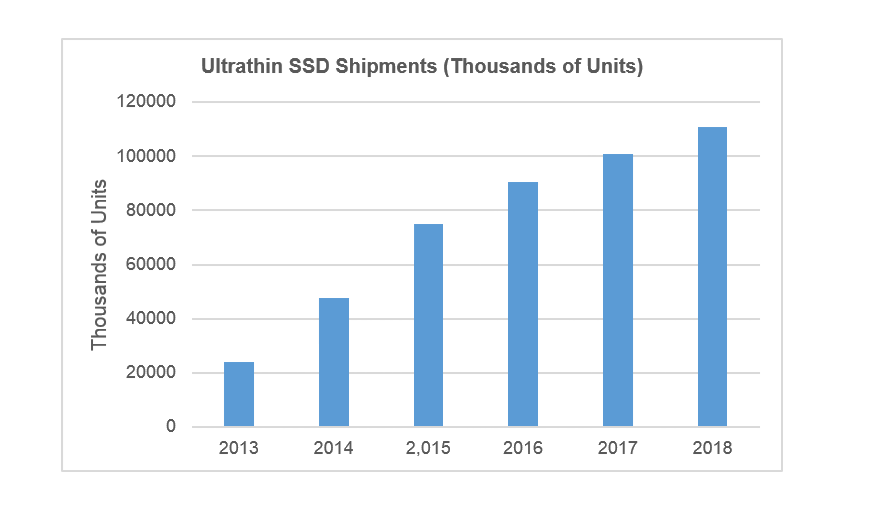 The SSD part is manufactured on Micron’s 16nm process technology and includes features such as RAIN onboard fail-over protection, power-loss protection for data at rest and adaptive thermal monitoring to adjust power consumption based on system temperature. Also included is a self-encryption technology to meet government standards in order to ensure mobile data is secure even in the event of theft or loss.

Micron to Spotlight ReRAM at ISSCC